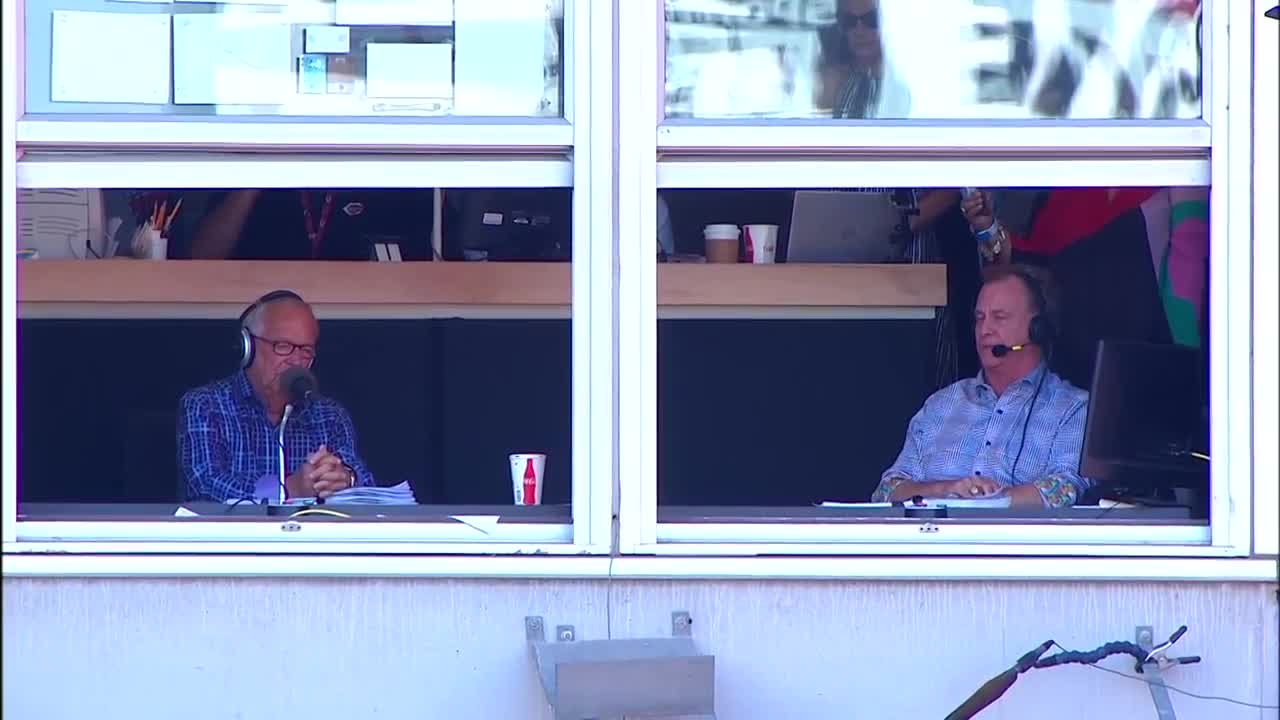 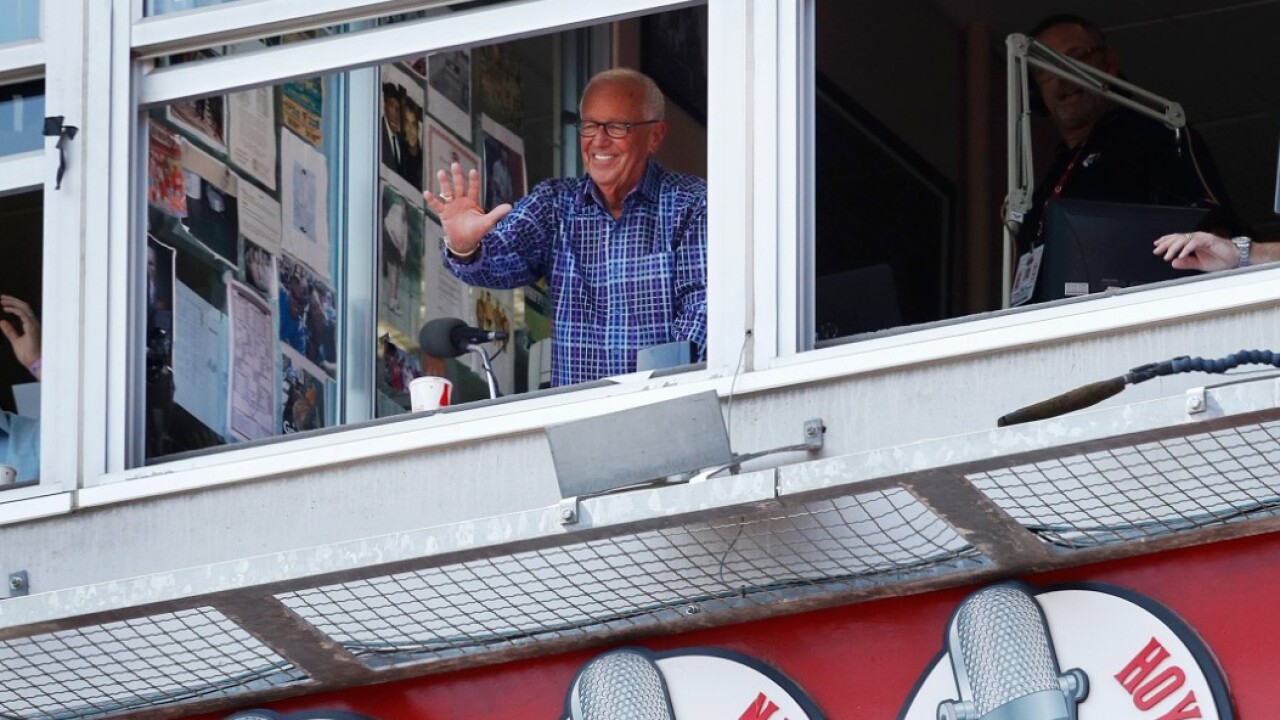 CINCINNATI — And this one belongs to Marty Brennaman.

His voice crackled at times and there were moments when emotions nearly got the best of him, but for most of his final nine innings behind the microphone on Thursday afternoon, Brennaman was his vintage self.

There was no “And, this one belongs to the Reds!” for his final game, which the Reds lost 5-3 to the Milwaukee Brewers. True to his style, Brennaman didn’t mince words about the team’s performance, but he did take time to show his appreciation for the outpouring of love thrown his way over the past few months.

“That’s your ballgame,” Brennaman said, calling the final out of his 46-year career. “No suspense here in the ninth.”

But there was plenty of emotion.

Following the last out, Reds players emerged from the dugout and tipped their caps toward the broadcast booth as the crowd stood, turned toward Brennaman and applauded.

Thousands of fans poured onto the field for a post-game ceremony honoring Brennaman. The Reds called it a "Marty Party."

And this one belongs to Marty! It’s time to honor Marty Brennaman and celebrate his 46 seasons in the Reds’ radio booth! #ThanksMarty https://t.co/7rV0MefExn

Brennaman knew his final broadcast on Thursday would be difficult. Earlier this week, he said it would be the most difficult day of his life.

A career full of highlights

During his career, Brennaman broadcast thousands of Reds games. He called a perfect game and a few no-hitters. He called Randy Johnson’s 20-strikeout game. He covered three World Series champions, five Most Valuable Players, three Rookies of the Year and three 20-game winners.

Most of all, he endeared himself to fans throughout Reds Country and immersed himself in this community through his charity efforts. Despite offers to go elsewhere, he couldn’t imagine working anywhere else.

“I never felt like the grass was always greener,” Brennaman said this week. “This town has everything. It has the best people in the world.”

Prior to Thursday’s game, fans were given a transistor radio, giving them the chance to listen to Brennaman’s final broadcast. It was a throwback to a bygone era when radio ruled in baseball and voices like Brennaman were the only way to catch the game.

“Nobody has put more people to sleep than Jeff Brantley and I have,” he quipped during Thursday’s broadcast.

As Brennaman began his broadcast on Thursday by announcing the starting lineups, his voice and delivery were as sharp as they were in 1974 when he debuted as the Reds' broadcaster replacing Al Michaels.

“This wraps up my career,” Brennaman said during the final sign-on. “It’s here at home as it should be, just as it was in 1974. It’s an emotional day for me. There will be a lot of tears.”

Over the past few weeks, the gifts and well-wishes have poured in from fans and other teams. That continued Thursday morning when Brennaman’s cell phone buzzed during his drive to Great American Ball Park.

“Got a phone call from (former major-league player and manager) Joe Girardi,” Brennaman said. “He rendered me to tears while I was driving down to the ballpark. It was a very thoughtful call.”

Mayor John Cranley declared it “Marty Brennaman Day” in Cincinnati prior to the game. Ohio Gov. Mike DeWine visited Brennaman in the broadcast booth during the fourth inning and gave him a proclamation.

A crowd of 27,774 showed up at Great American Ball Park for Thursday’s game, and many fans came with banners and signs honoring Brennaman.

The fans gave him a standing ovation in the middle of the fifth inning and again in the ninth when he was shown on the scoreboard and each time, Brennaman emerged from his seat to acknowledge the cheers.

“They don’t owe me anything,” Brennaman said during the seventh inning. “They’re the ones I owe everything (to). This town has been so good to me. They willingly opened their arms to me in 1974. Never dreamed it would be 46 years later and I’m wrapping it up today.”

The significance of the day was not lost on Reds players or their manager.

“I grew up in Indianapolis and depending on where we were at in the city based on the power lines, we were able to catch 700 WLW without that much static,” said Reds catcher Tucker Barnhart. “Driving to tournaments on the weekends, you turned on 700 and Marty would be calling the game. It takes me back to a very fun place in my life. I’ve been extremely fortunate to have developed a friendship with him off the field.”

Instead of alternating innings like he typically would, Brennaman called all nine innings on Thursday, something Brantley reminded him of in the bottom of the third.

“Just letting you know I’m not doing play by play this inning,” Brantley said. “You’re in there for nine today.”

“And everything coming unbent for Luis Castillo!” Brennaman said, as the Brewers erupted for four runs in the fourth.

Never one to shy away from controversy, Brennaman also revisited the steroid era in baseball and Pete Rose’s absence from the Hall of Fame.

“The Hall of Fame will never be whole until the day Pete Rose is in it,” Brennaman said.

When the Reds failed to cash in on a bases-loaded situation in the eighth, Brennaman exclaimed, “That has been the essence of this ballclub this season: the lack of clutch hitting.”

Brennaman called Hank Aaron’s historic 714th home run to tie Babe Ruth’s record during the first broadcast of his career. There would be no such history made on Thursday.

And, there also won’t be any cameo appearances, no second retirements. That’s not Brennaman’s style. Although he left the door open to do some college basketball in the future, Thursday’s broadcast will always be his final baseball game.

However, he has no intention of leaving Cincinnati. Brennaman plans to play golf with his grandsons on Friday, and later that night, he is planning to attend the Anderson High School football game.

After nearly two decades as the voice and face of the Cincinnati Reds franchise, Brennaman wrapped up his final broadcast like this: “We’ll see you down the road. If you see me around town in the coming months or years, please stop and say hello, and we’ll chat a little.”

Thursday’s victory didn’t belong to the Reds. But the day belonged to Marty.