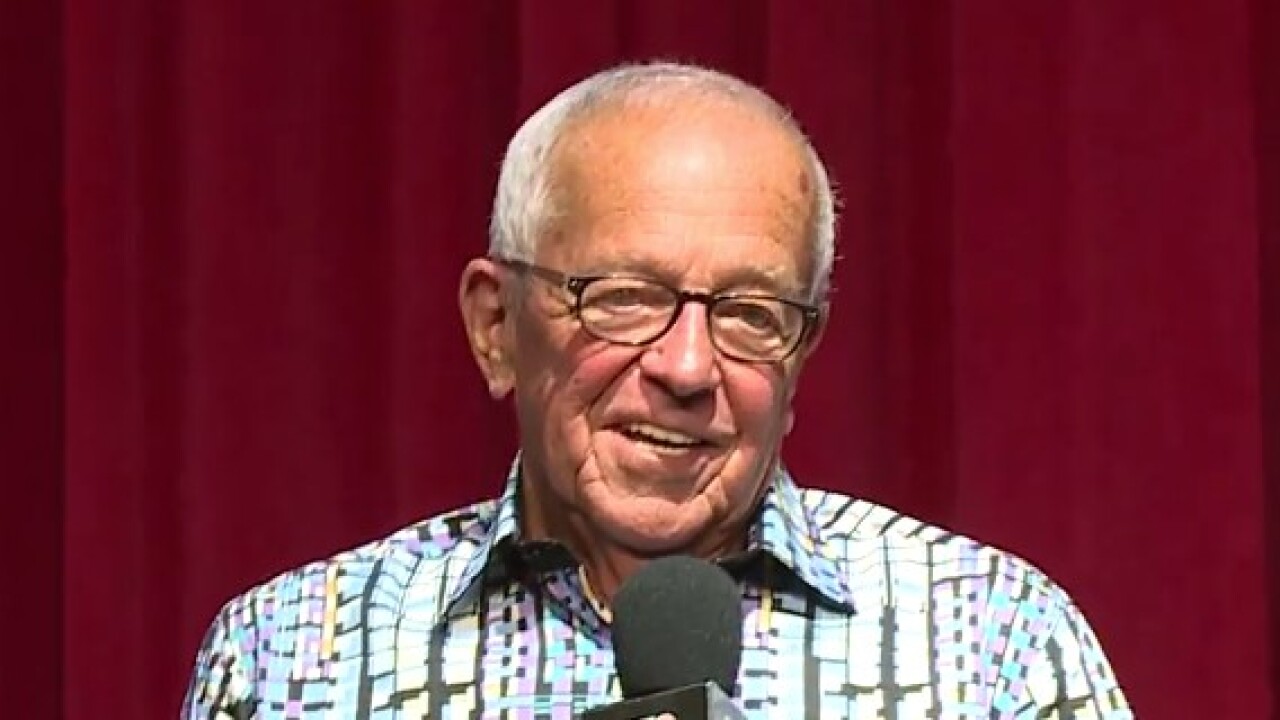 Copyright 2019 Scripps Media, Inc. All rights reserved. This material may not be published, broadcast, rewritten, or redistributed.
WCPO
Marty Brennaman talks on Sept. 24, 2019 about his impending retirement.

Tweets from sports figures as Marty Brennaman ends his 46-year career as radio voice of the Reds:

Talk about an end of an era. Today my friend Marty Brennaman calls his last Reds game before calling it a career. Marty is a true professional and an even better person. I couldn’t be happier for Marty and the entire Brennaman family for the legacy he has left behind. Congrats.

Today marks the end of an incredible era of Major League Baseball as Marty Brennaman calls his final @Reds game. He’s one of the best to ever do it and has been the voice of multiple generations. Savor tonight, Marty, and enjoy retirement! Thanks for giving so much to the game!

How could Cincinnati do better than Al Michaels to Marty Brennaman. pic.twitter.com/S306nPUafV

What a genuine true SOLID GOLD Hall of Famer broadcasting great MARTY BRENNAMAN has been with @Reds Marty has retired but will never ever be forgotten . This one is for u MARTY / u have been #AWESOMEBABY !@TomBenna

Two of my favorite Matty V n Marty B! Wow what a great tribute to one of the best ever in the booth. We’ll miss u Marty and thanks for all the memories.@Reds @MLBNetwork https://t.co/VqZ2WvfBE4

And this one belongs to Marty! Congratulations to 2000 Frick Award winner Marty Brennaman, who retires today after 46 seasons as the voice of the @reds. Photo: Milo Stewart Jr. https://t.co/kjeSmLiMrj pic.twitter.com/AF4XF1zsj2

The game loses a few greats every year and Thursday will be Marty Brennaman’s last broadcast for the Cincinnati Reds. He always told it like it was. He ruffled some feathers. The front office and the players had problems with his opinions. The fans loved him. We’ve lost a legend

Some Marty Brennaman by the numbers. He's called:

Congrats to my good friend & favorite broadcaster Marty Brennaman as he retires today. I loved listening to Marty & Joe Nuxhall as a kid in Cincinnati. My dream came true when Marty called my HR while I was playing for San Diego. God bless & good health, Marty. @Reds #ThanksMarty pic.twitter.com/8UCnMKj4Gy

Just listening to the @Reds legend Marty Brennaman! Just wanted to say congratulations Marty on a truly remarkable career! Always special to listen to you call a game!

A tip of our cap to Marty Brennaman, the legendary voice of the @Reds and Frick Award winner who is calling his final broadcast today after 46 years in the booth. Read @SABRbioproject to learn more about Marty's life and legacy in Cincinnati: https://t.co/vhYMZwhyqm #SABR pic.twitter.com/wEU5Csen86

End of an era today for THE greatest baseball broadcaster in the game. From listening to 700 WLW after little league games or in the garage with pop, Marty has given me memories I will never forget. Can’t thank him enough. Happy retirement Marty Brennaman! pic.twitter.com/XilfQq1VLe

Reds broadcaster Marty Brennaman is retiring after the 2019 season and on his final trip to Miller Park, the Brewers broadcast Crew sent him off in style—complete with @Skyline_Chili. pic.twitter.com/THm9Ejbut8

Marty Brennaman calls his final Reds game this afternoon after 46 seasons on the job. 📻#ThanksMarty pic.twitter.com/ncdhXy2FrX