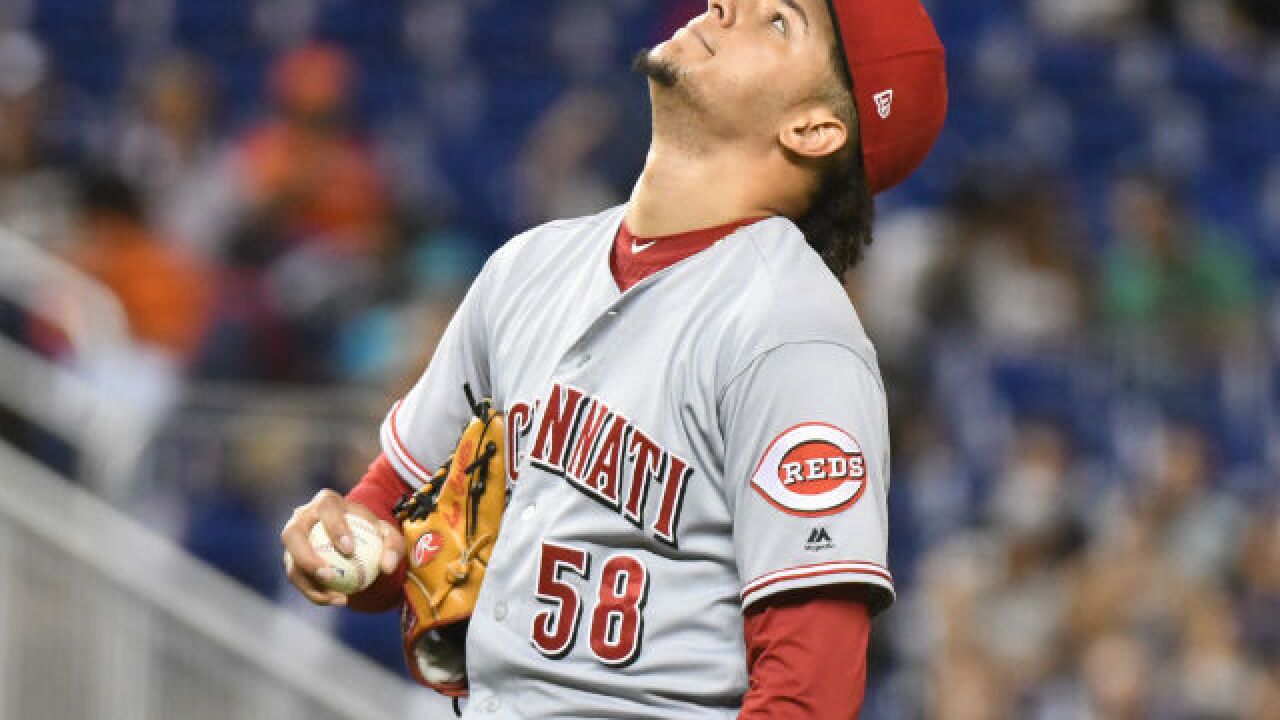 Image copyright 2018 Getty Images. All rights reserved. This material may not be published, broadcast, rewritten, or redistributed.
<p>MIAMI, FL - SEPTEMBER 21: Luis Castillo #58 of the Cincinnati Reds reacts while waiting for manager Jim Riggleman #35 to come to the mound to take him out in the ninth inning against the Miami Marlins at Marlins Park on September 21, 2018 in Miami, Florida. (Photo by Eric Espada/Getty Images)</p>

MIAMI (AP) — Luis Castillo pitched what he called "the best game of his life," but neither he nor the Reds got anything to show for it.

The 25-year-old right-hander, hoping for his first career shutout, blanked the Marlins into the ninth inning Friday night but left with one out in a scoreless tie.

Pinch-hitter Isaac Galloway smacked an RBI double in the 10th inning off reliever David Hernandez  to  give the Marlins a 1-0 victory.

"The best game of my life has been this one, thanks to God," said Castillo, who came to the Reds from the Marlins in a 2017 offseason trade for starter Dan Straily.

Castillo allowed five hits, struck out five and walked one in his 8 1/3 innings.

Castillo said he had no special feelings about pitching against the team that traded him.

"It is another team. I don't feel anything special. I feel well because I pitched here before. I know a lot of them," he said.

Hernandez (5-2) relieved Castillo with two in the ninth and retired Peter O'Brien on a double play.

But in the 10th, Galloway drove Hernandez's 3-2 slider past right fielder Phillip Ervin to plate Brian Anderson, who had reached on a double to right. Galloway, who spent 11 seasons in the minor leagues, made his major league debut on July 31.

"It made me feel good to help the team come through," said Galloway. "I was kind of in front of it a little bit but luckily it fell."

Kyle Barraclough (1-6) retired the final two batters in the top of the 10th to get the win for Miami.

Wei-Yin Chen pitched seven innings of three-hit ball for the Marlins, striking out eight in his final home start of the season. Chen finished with a 1.62 ERA in 13 starts at Marlins Park.

The closest the Reds came to scoring came in the fifth inning. Ervin led off with a double and advanced to third on Curt Casali's flyball to right before he was forced out at home on Blake Trahan's grounder to shortstop JT Riddle.

Derek Dietrich hit a one-out double in the second for Miami and was later forced out at third on a grounder to Trahan.

Cincinnati's Scooter Gennett went 0-for-4 with three strikeouts after hitting a home run and double in the series opener Thursday. His batting average dropped two points to .316 - four points behind Milwaukee's Christian Yelich for the NL lead.

Reds: SS Jose Peraza was a late scratch because of an illness. Trahan replaced him.

Reds: RHP Anthony DeSclafini (7-6, 4.92 ERA) will make his third start against his former team Saturday. DeSclafini pitched for the Marlins in 2014.