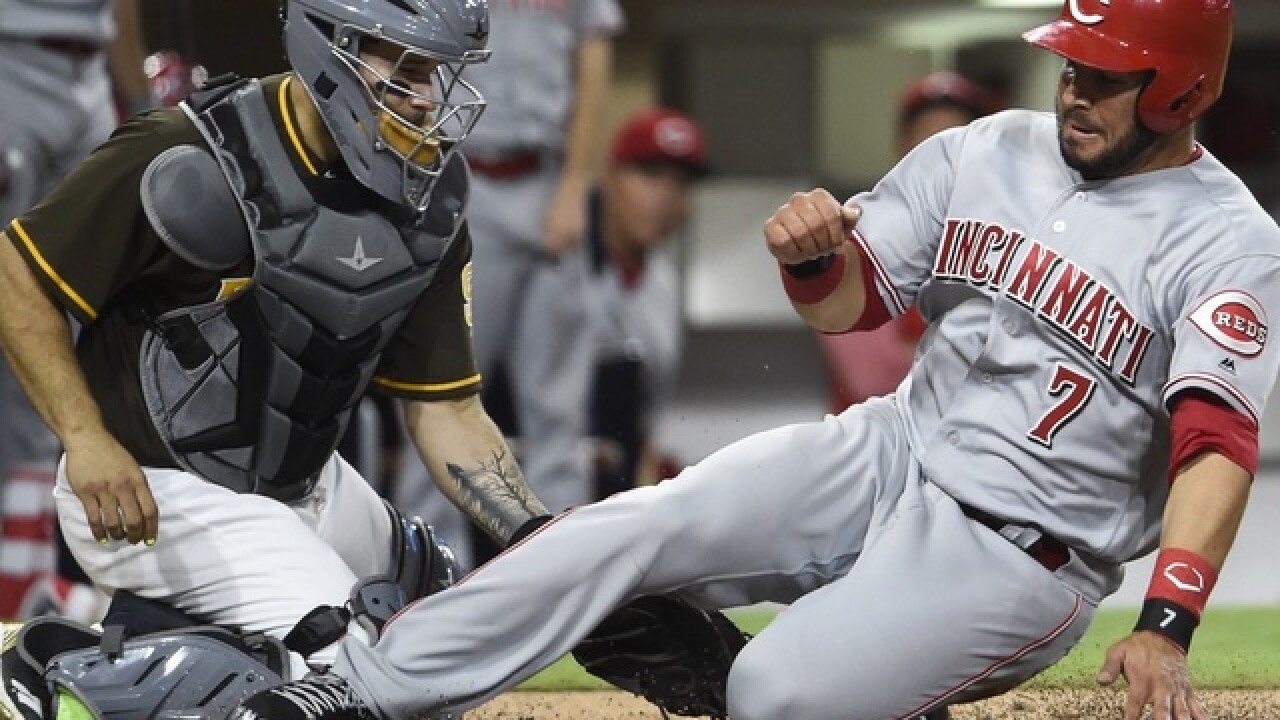 Image copyright 2018 Getty Images. All rights reserved. This material may not be published, broadcast, rewritten, or redistributed.
Denis Poroy/Getty Images
<p>SAN DIEGO, CA - JUNE 1: Eugenio Suarez #7 of the Cincinnati Reds slides into the the plate just ahead of the tag of Raffy Lopez #0 of the San Diego Padres during the seventh inning of a baseball game at PETCO Park on June 1, 2018 in San Diego, California.</p>

SAN DIEGO -- Scooter Gennett hitting a home run is nothing unusual for the Cincinnati Reds.

Michael Lorenzen recording a four-inning save certainly is.

Gennett homered, Jose Peraza had three hits and three RBIs, and Lorenzen cruised through the last four innings for his first save this year as the Reds beat rookie right-hander Walker Lockett and the San Diego Padres 7-2 Friday night in a matchup of last-place teams.

After Tyler Mahle (4-6) pitched five scoreless innings, Lorenzen took over and nearly got through his four innings unscathed before Freddy Galvis hit a two-run triple with two outs in the ninth as center fielder Billy Hamilton slammed into the fence trying to track down the ball. Hamilton was checked for several minutes but stayed in for the final out.

Lorenzen allowed two runs on two hits, struck out four and walked one in the Reds' first four-inning save since Elmer Dessens did it in an 11-5 win on June 24, 2000.

Said interim manager Jim Riggleman: "He was getting some early count outs, first- and second-pitch outs. That's as good as we've seen. That's what we know is in there, we know Mike can do that."

Galvis' fly ball hit off the heel of Hamilton's glove just before the fielder slammed into the padded fence and then hit the ground. He was able to flip the ball to right fielder Scott Schebler.

The Reds came in with the NL's worst record. The Padres, who have the league's third-worst record, had taken three of four against the Miami Marlins, the NL's other last-place team.

Gennett, who on Tuesday won his second NL Player of the Week Award in May, hit his 11th homer to center field leading off the fifth off reliever Robbie Erlin to give the Reds a 5-0 lead. Travis Jankowski made a futile leaping attempt at the ball as it cleared the fence.

Lockett (0-1), a 24-year-old right-hander, lasted 3 2-3 innings in his major league debut. He allowed four runs and four hits, walked five and struck out two. He was recalled from Triple-A El Paso, where he was 2-5 with a 5.31 ERA. He was starting in place of Joey Lucchesi, who is on the disabled list with a strained right hip.

Lockett allowed a run in the third on a leadoff walk, stolen base and two groundouts, and then allowed three runs in the fourth on three hits and two walks. Peraza hit a two-out double before Lockett struck out Mahle and Hamilton. But the rookie walked Jesse Winker and allowed an RBI single to Tucker Barnhart before making way for Erlin.

The Reds added two runs in the seventh, one on Peraza's single.

Lockett got through the first two innings OK but then walked Hamilton leading off the third.

"The walk to Hamilton kind of set the day in the wrong direction," manager Andy Green said. "Guy went through a lot of emotions in his first day in the big leagues. Outside of the walks, he wasn't getting hammered around the ballpark. Five free passes, it's tough to compete."

Said Lockett: "I was just a little bit out of whack that third inning. I was getting really rotational, wasn't staying through my pitches, so I think that played a big part."

Reds: RHP Matt Harvey (1-3, 5.63) is scheduled to make his fifth start with the Reds on Saturday night. He made two relief appearances at Petco Park against the Padres earlier this year while he was with the New York Mets.