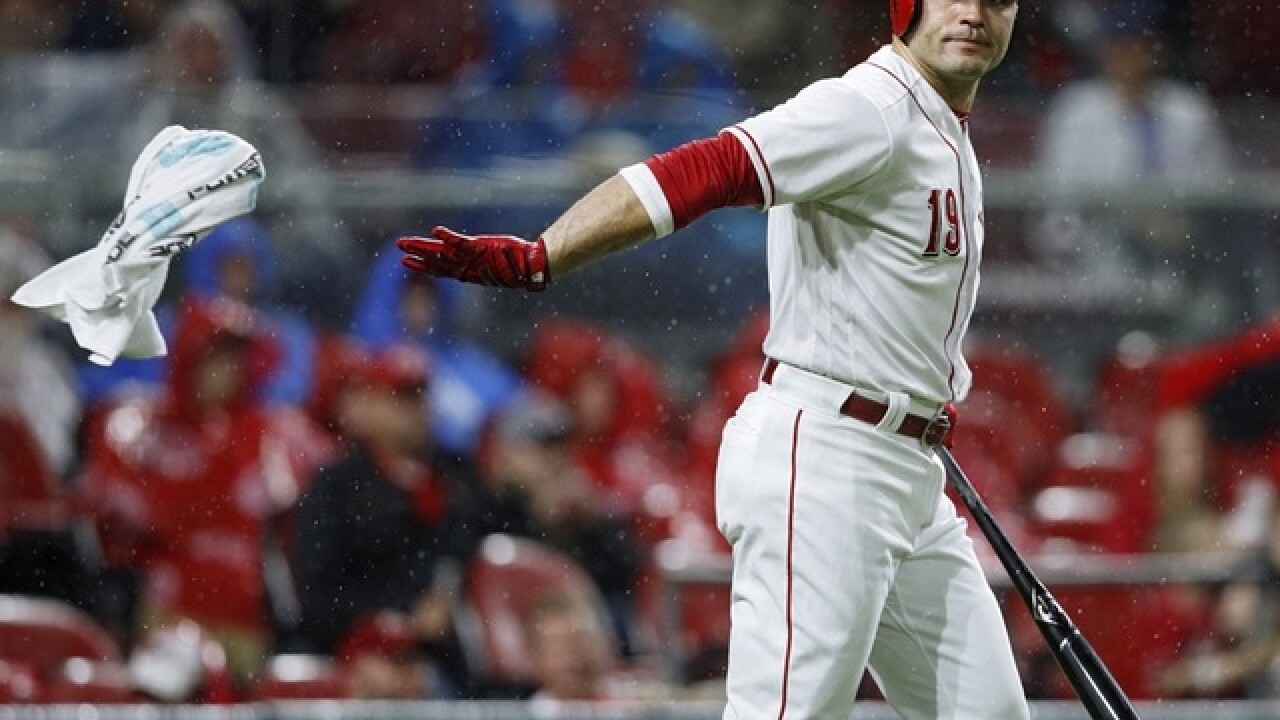 Image copyright 2018 Getty Images. All rights reserved. This material may not be published, broadcast, rewritten, or redistributed.
Joe Robbins/Getty Images
<p>CINCINNATI, OH - MAY 18: Joey Votto #19 of the Cincinnati Reds tosses a towel toward the on deck circle before coming to bat in the first inning against the Chicago Cubs at Great American Ball Park on May 18, 2018 in Cincinnati, Ohio.</p>

CINCINNATI -- Jon Lester is getting used to weathering rain delays.

Making his fourth consecutive start that included a delay, Lester pitched six dominant innings, Addison Russell tied his career high with four hits and the Chicago Cubs quickly took control with a three-run first inning on the way to an 8-1 win over the Cincinnati Reds in the opener of their four-game series Friday night.

Playing in a steady downpour that delayed the start of the game by 93 minutes, Willson Contreras added three hits and six different players each drove in at least one run for the Cubs, who'd lost three of their last four games.

Lester (4-1) faced one batter over the minimum through the first four innings and held the Reds hitless until Scooter Gennett led off the fourth with a sharp one-hopper past diving first baseman Anthony Rizzo. The left-hander allowed Cincinnati's only two hits and one walk with a season-high eight strikeouts and even contributed a safety squeeze sacrifice bunt while Chicago was breaking the game open with a two-run fifth inning.

"It was't easy," said Lester, who was scheduled to start on Thursday in Atlanta in a game that was postponed after a 2-hour, 20-minute delay at the start. "It was to get going and pitch. You just have to figure out a way to deal with it. We've all got to play through it.

"It's an added bonus that I grew up in the Northwest," the Tacoma, Wash., native added. "Seventy percent of my games were played in this. Hopefully, we'll get to summer and we won't have to worry about systems like this coming through."

The Reds, coming off a successful 5-2 road trip through Los Angeles and San Francisco, managed just two baserunners before Adam Duvall hit Lester's first pitch of the fifth inning out to left field for his ninth home run.

"He did a pretty complete job," Chicago manager Joe Maddon said about Lester. "What he did was not easy. I loved the way he handled the delay. When you play in this division in this part of the country, you expect these kinds of things."

The Cubs were happy just to be playing. They tattooed Cincinnati starter Homer Bailey, building a 3-0 lead by the time Bailey threw his 19th pitch. Chicago's first five batters all got hits before interim pitching coach Danny Darwin visited the mound.

"Homer battled," interim manager Jim Riggleman said. "I tip my hat to him. He was hit, but we were only down four runs. (Ben) Zobrist and (Kris) Bryant within three or four pitches set the tone. He got hit aroun,d but the next thing you know it's a four-run ballgame. That's not something we can't overcome.

"We couldn't do anything with Lester. That was the bigger issue."

Bailey (1-6) allowed 10 hits in five or fewer innings for the second consecutive game. Opponents have reached the right-hander for 28 hits in 13 2/3 innings over his last three games. He gave up six runs and issued five walks with three strikeouts in 4 2/3 innings.

"I went back and watched," Bailey said. "I'm a little frustrated because there were some good pitches that they did a good job of hitting. It is a great offense over there, and they did a pretty good job, but it's a little tough sometimes."

Reds 1B Joey Votto batted fourth for the 29th time in his 11-year career and first since May 14, 2014, in both games of a doubleheader against San Diego.

Cubs: OF Jason Heyward was activated before the game from the seven-day concussion disabled list.

Reds: 3B Eugenio Suarez returned to the starting lineup after missing Wednesday's game at San Francisco with a right ankle injury he suffered on Tuesday.

Reds: RHP Luis Castillo (3-4) is the projected starter for the first game of Saturday's day-night doubleheader with RHP Sal Romano (2-4) starting the nightcap.