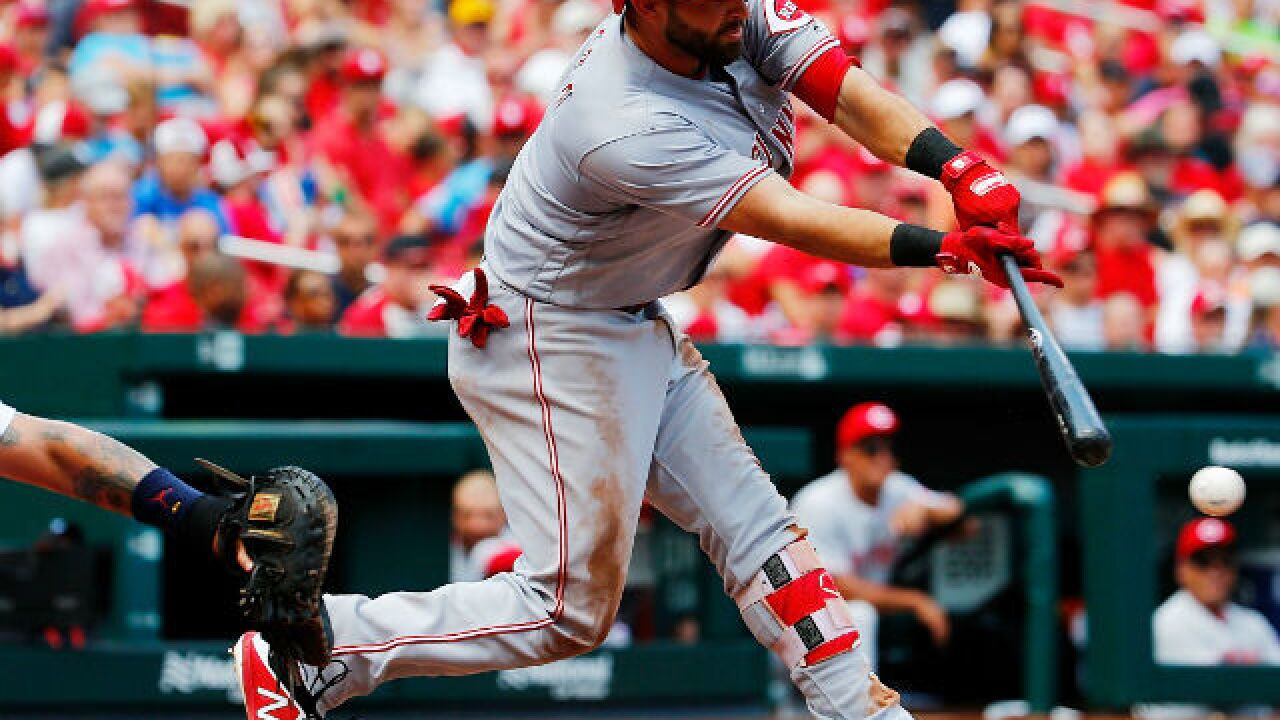 Image copyright 2018 Getty Images. All rights reserved. This material may not be published, broadcast, rewritten, or redistributed.
<p>ST. LOUIS, MO - JULY 15: Jose Peraza #9 of the Cincinnati Reds hits an RBI single against the St. Louis Cardinals in the fourth inning at Busch Stadium on July 15, 2018 in St. Louis, Missouri. (Photo by Dilip Vishwanat/Getty Images)</p>

ST. LOUIS -  It was a very good day for Jose Peraza. Unfortunately, it wasn't for Anthony DeSclafani.

While Peraza went 3-for-4 and set a Reds franchise record,  DeSclafani gave up a home run to his first batter and allowed six runs in 3 1/3 innings in a 6-4 loss to the Cardinals.

"Today was obviously not the way I wanted to go into the All-Star break," DeSclafani said, according to Reds.com. "It would have been nice to win today. But I just wasn't good. I was terrible. I wasn't throwing quality strikes. The slider was kind of loopy. I was not getting ahead of guys. I've got to figure something out to be a little bit more consistent there."

"I was feeling really good in this series," Peraza said through interpreter Julio Morillo.

The Reds are feeling good, too about starting the second half of the season after the All-Star break, beginning Friday in Pittsburgh

READ more about the Reds at reds.com

In the other clubhouse, the Cardinals gave their new interim manager, Mike Shildt, a wild post-game celebration.

“They got me in a laundry basket and they spin you around and then they go at you with a bunch of cold water to the point where I was hyperventilating,” Shildt said.

“That guy knows his stuff, and you’re happy to put a smile on his face and get the (first) win for him,” center fielder Dexter Fowler said.

The frivolity came at a perfect time for the Cardinals, who broke a six-game home losing streak.

Rumors of discontent in the locker room, along with inconsistent play, spelled the end for manager Mike Matheny, who was fired after Saturday’s 8-2 loss after six-plus seasons. The Cardinals were 591-474 during Mathey’s tenure and made the playoffs in each of his first four years. But St. Louis failed to reach the postseason the last two years.

Matheny was a gold glove catcher for St. Louis from 2000-04 and used those leadership qualities as a manager.

“When you see that happen, it’s because us, as players, we’re not doing our job,” Molina said. “I hate to say it, but that’s what it is. The blame is on us.”

Matt Carpenter hit a leadoff homer and Fowler also homered off DeSclafani (4-2). John Gant (3-3) picked up the win with four hitless innings of relief. He struck out four and walked two.

Trailing 2-0, the Reds went ahead 3-2 in the fourth against starter Miles Mikolas.

Adam Duvall tied the game for the Reds with a two-run, bases-loaded single in the fourth. Peraza then put his team in front with a single off Mikolas' leg.

The Cardinals came back with four in their half of the fourth. Tommy Pham erased a 3-2 deficit with a two-run single for his first hit since July 5. He entered the game in the second inning after starter Harrison Bader left with a knee injury.

“Those are guys that have proven success in this league,” Shildt said. “It’s definitely good for their confidence.”

Reds outfielder Jesse Winker extended his hitting streak to a career-high 10 games with a third-inning single.

Reds: RHP Homer Bailey allowed four earned runs in six innings of a rehab start for Triple-A Louisville on Friday. Bailey is 1-2 with a 5.87 ERA in six minor league appearances. He was put on the disabled list June 2 with right knee inflammation.

Cardinals: Bader suffered his knee injury while running out a hit to right field.

Reds: Cincinnati begins the second half on Friday against Pittsburgh. Right-hander Tyler Mahle (7-7, 4.02) will get the start.

Cardinals: St. Louis travels to Chicago for a four-game series against the Cubs after the break.