Jim Riggleman sees hits and errors of his ways, so will he be back?

Reds have a lot to decide in offseason 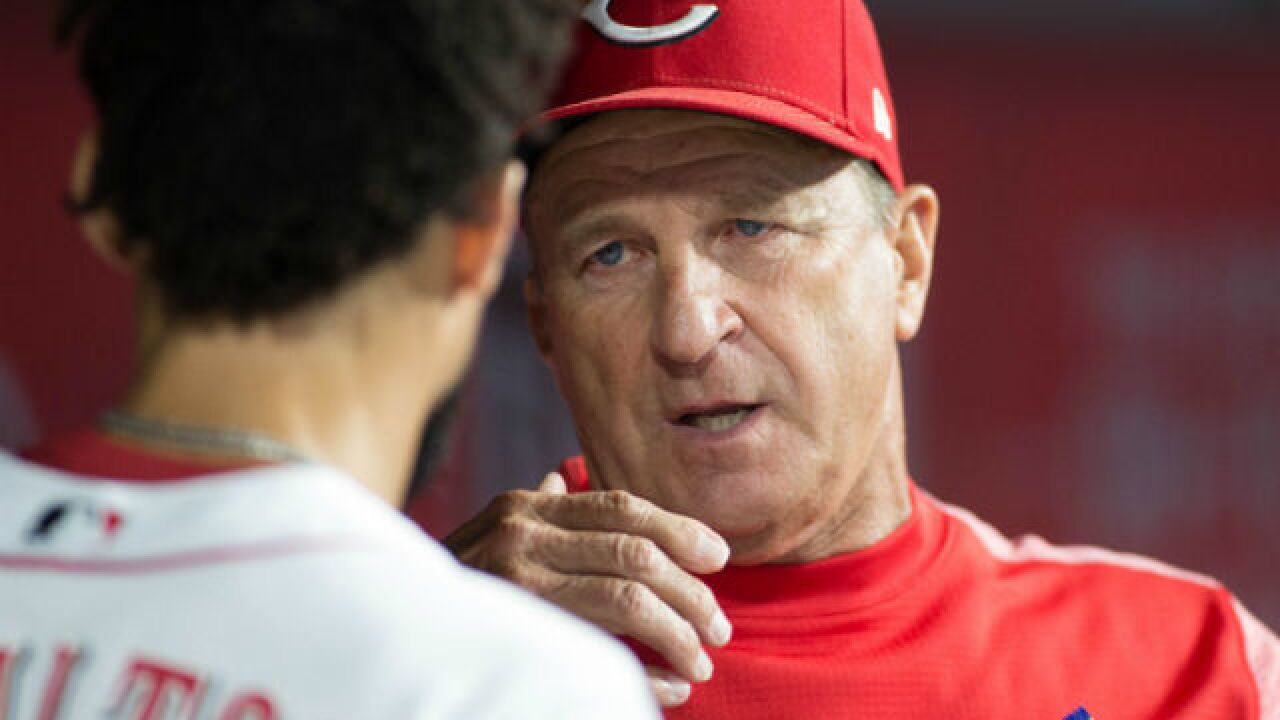 Image copyright 2018 Getty Images. All rights reserved. This material may not be published, broadcast, rewritten, or redistributed.
<p>CINCINNATI, OH - SEPTEMBER 10: Manager Jim Riggleman #35 of the Cincinnati Reds talks to Billy Hamilton #6 during the game against the Los Angeles Dodgers at Great American Ball Park on September 10, 2018 in Cincinnati, Ohio. (Photo by Justin Casterline/Getty Images)</p>

CINCINNATI – Jim Riggleman was named interim Cincinnati Reds manager on April 19 when his close friend, Bryan Price, was fired. Over the remaining five-plus months of the season, Riggleman kept the clubhouse from fracturing and, amid a slew of injuries and a starting rotation that never got on track, did what he could to right a sinking ship.

“I came into it with some negative feelings because my good friend, Bryan Price, was walking out the door as I’m walking in,” said the forthright Riggleman, who was Price’s bench coach for three seasons. “That 3-15 (start to the season), I was responsible for that just like Bryan Price was. I was standing next to Bryan. I saw him make decisions that I totally agreed with.”

Riggleman planned to interview for the Reds managerial post on Monday.

Injuries again put the Reds at a disadvantage when projected Opening Day starter Anthony DeSclafani suffered an oblique injury in spring training and Eugenio Suarez and Scott Schebler were injured barely one week into the season. Price’s fate was sealed in the first three weeks.

Five years into their rebuilding project, the Reds are still trying to figure that part out.

Price went 279-387 during his tenure. The Reds went 64-80 under Riggleman to finish 67-95, for a fifth straight losing season and fourth straight last-place finish in the NL Central after starting the season 8-27. Eighteen Reds players made 19 separate appearances on the disabled list this season.

Reds President of Baseball Operations Dick Williams said Riggleman, bench coach Pat Kelly, third base coach Billy Hatcher and infield coach Freddie Benavides are internal candidates to be the Reds’ next manager, along with accomplished big-league skipper John Farrell, who currently serves in a consultant role with the Reds. There will be external candidates as well.

“If I continue to do (the job), it’s best-case scenario,” Riggleman said. “If I don’t, I’ll respect whatever decision the Reds come up with. I’ve been in the organization now seven years. I’m extremely familiar with the player development system, our current major league roster and our coaches. I love to manage.”

Riggleman has plenty of support within the Reds clubhouse. Relievers Jared Hughes and David Hernandez often lauded Riggleman for how he clearly defined roles within the pitching staff and openly communicated with players. Billy Hamilton credited Riggleman’s positive approach for helping keep things from unraveling any further.

“There are a few bridges on the way to my house I’d want to stop by now and then,” Hamilton said, tongue in cheek, of course. “There’s plenty of times where I’d say. ‘I’m done with this’. But he kept us above ground. He knows we’re a team that wants to win. He’s one of those guys you love playing for. He’s a great manager.”

The Reds aren’t known for making big-splash managerial hires. Among the internal candidates, Farrell is the closest thing, having led the Red Sox to a World Series title in 2013, but Riggleman has around 100 more managerial wins.

Although the Reds stumbled to the finish, losing seven of their final eight games, for about two months under Riggleman they played about as well as any team in baseball. It wasn’t uncommon to see Riggleman out on the diamond before games putting even the Reds’ veteran players through extra base-running drills or infield practice.

Riggleman, who turns 66 in November, said he’s been willing to adjust to the modern metrics-driven game.

“One of the progressions for myself is learning more and adapting to the analytics in the game,” he said. “I like it (and) I’m as old-school cave-man as anybody in the game. We factor that into how we manage the ballgame now.”

Regardless of who is named Reds manager in the coming weeks, improvements must be made to the roster, most notably to the pitching staff.

“There were stretches where we played really well,” said Hamilton. “I know what type of team we’re capable of being. The wins and losses, that doesn’t define the type of team we were. There are some pieces we need to put together to get better.”

The everyday lineup around Joey Votto should remain intact, except for the much-anticipated addition of top position prospect Nick Senzel, whose season ended prematurely due to a fractured finger just as he was obliterating Triple-A pitching.

Senzel plans to play in the Arizona Instructional League, where he’ll get work in the outfield, making the crowded Reds outfield that much more congested. The idea is to have Senzel learn as many positions as possible to get his bat in the lineup.

Jesse Winker batted .299 with 16 doubles, seven homers and 43 RBIs in 89 games before a shoulder injury ended his season in mid-July. He’s expected to be ready for spring training.

It could be another offseason of trade talk involving Schebler, who hit 17 homers, and Hamilton, who played a career-high 153 games this season. The Reds have expressed a desire to sign Scooter Gennett to a contract extension after doing the same for Suarez.

Gennett was the best hitter in the NL this season not named Christian Yelich. Suarez, 27, hit 34 homers with 104 RBIs and has evolved into a Gold Glove-caliber third baseman. Jose Peraza became the first shortstop to lead the Reds in hits since Felipe Lopez in 2005.

“I think offensively we’ve got a pretty good core there,” said Riggleman. “We have three All-Stars in the infield. I think the addition of (Curt) Casali with Tucker (Barnhart) has a good chance to be a plus for the ballclub. (Jesse) Winker really impressed me the first half. We’ve got a nice young prospect coming in Senzel.”

But, herein lies the rub.

The Reds, who centered the rebuild around the acquisition and development of young pitching, used 32 pitchers this season, tying a franchise record set in 2016. The 4.63 staff earned run average ranked second to last in the NL. They allowed a NL-high 226 home runs. The starting staff had an ERA of 5.03, also ranked second from the bottom in the league.

“We need to make some adjustments with our pitching,” Riggleman said. “Maybe it’s the way we attack hitters. It might not be personnel (but maybe) the way we get hitters out.”

Which brings us to Homer Bailey.

Can the Reds afford to eat $28 million and release their second-highest paid player next to Votto? If not, can Bailey at the age of 32 rediscover his fastball command after going 9-27 with a 6.25 ERA the past four seasons?

Williams has said that the team payroll will increase in 2019 and that the club will be open to pursuing free-agent pitchers, with the most likely target being Reds right-hander Matt Harvey, who was 7-7 with a 4.50 ERA in 24 starts since being acquired from the New York Mets.

While the Reds seek arms from outside the organization, they will continue to pin their hopes on the corps of young starters that are the foundation of the club’s rebuilding efforts.

Luis Castillo’s strong finish to the season with a 3-1 record and 1.09 ERA in his final five starts was the most encouraging development for this group.

Sal Romano, 24, showed his versatility by making 14 of his last 19 appearances in relief after starting the first 19. “I feel in my heart I can start in this league, and my stuff still plays as a starter,” Romano said. “Going into the offseason, I feel I can do both.”

The Reds are still hoping Tyler Mahle and Robert Stephenson can develop into serviceable major league starters. Top pitching prospect Hunter Greene is a few years away, and is also coming off a season-ending injury.

There isn’t a whole lot of pitching depth in the Reds minor-league system that hasn’t already reached the majors. Whether it be Harvey or an outside free-agent candidate, the Reds need a veteran rotation anchor, assuming Bailey is no longer part of the plan.

It was a warm and sunny afternoon on Sunday at Great American Ball Park, not the proper metaphor for another season of gloom and doom for the Reds. The eventual winning run in a hard-fought 6-5, 10-inning loss to the Pirates scored on a wild pitch by Jackson Stephens.

It was a fitting end to another lost season at 100 Joe Nuxhall Way.

“The first few months I was on the job, things were going OK …. going in a direction where we were starting to get over the hump and turn the corner a little bit,” Riggleman said. “There was a lot of encouragement that has been deflated with the way we performed since August. That’s the nature of it. You have to find a way to minimize those down times. That falls on the manager.”