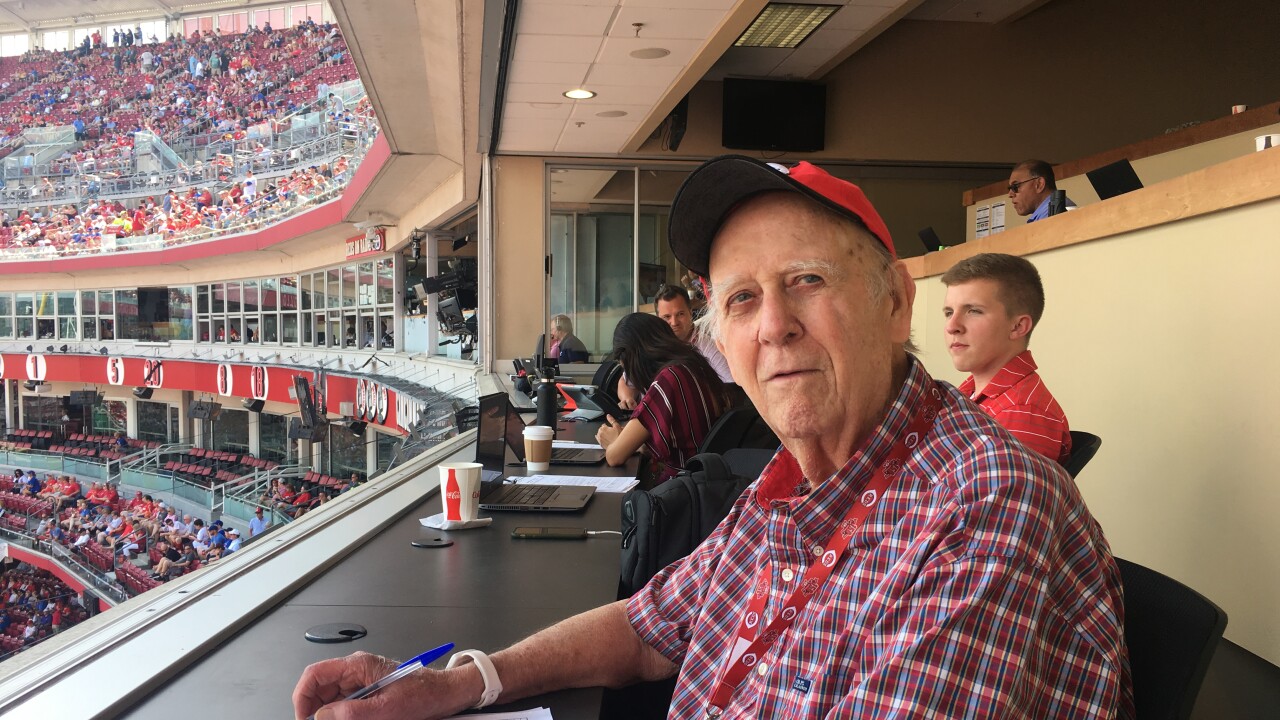 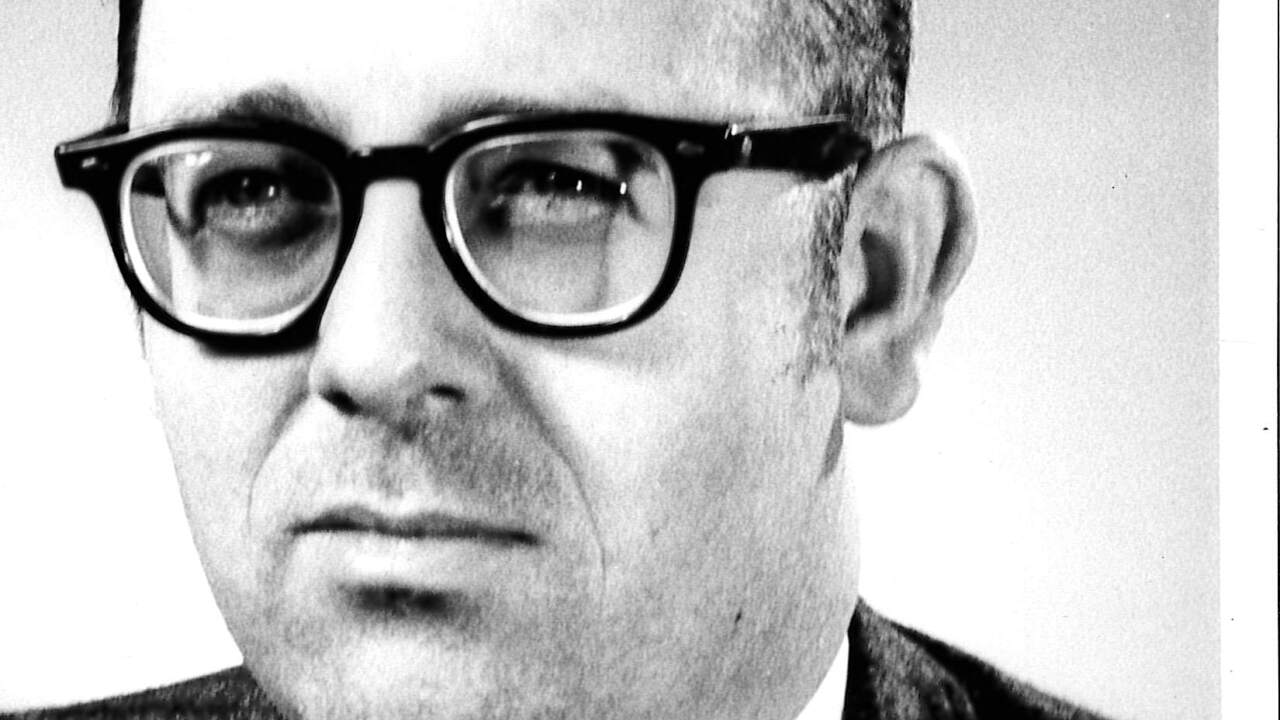 CINCINNATI — To a casual observer, Jim Ferguson is an anonymous figure in the press box at Great American Ball Park, but those who know him know better.

Better known as “Fergie,” he doesn’t attend every Cincinnati Reds game these days, but by his own best estimate, he has been to more than 5,000.

Ferguson, 87, maneuvers the ballpark, cane in hand, as well as any spry youngster, relying on his walker when he absolutely needs it; otherwise it gets stowed in the media workroom. He greets everyone with a smile, a handshake and, if you’re lucky, a story.

He has a lot of those. You see, Ferguson, a former sportswriter and director of publicity for the Reds, has witnessed more team history than just about anyone alive.

Growing up a devout Reds fan in Jamestown, Ohio, about 29 miles east of Dayton, the only thing he ever wanted to do for a living was write about sports. After graduating from Ohio State in 1954 with a journalism degree, he turned down higher-paying gigs to work at the Dayton Daily News, where he learned the ropes under future Baseball Hall of Fame writer Si Burick.

He had been at the paper for three years when the opportunity arose to cover the Reds, his favorite childhood team. In January 1959, he began a 14-year career as the Reds beat writer for the Dayton Daily News. He covered the Reds until after the 1972 World Series, then took the job as Reds director of publicity, a position he held until after the 1990 World Series.

“I liked to go out with a championship,” he said, smiling.

As the Reds celebrate the 150th anniversary of professional baseball, it’s important to note that Ferguson was around for more than 20 percent of the franchise’s existence.

He was there when the fledgling Big Red Machine evolved into one of the most dominant clubs in baseball history. He was there for Pete Rose’s 44-game hitting streak, eclipsing that of Ty Cobb, and Rose's banishment in 1989. He was there for Marge Schott, Tom Browning’s perfect game and the “wire-to-wire” championship in ’90 under Lou Piniella.

All you have to do is mention a name, sit back and let Ferguson share his memories.

“My professional life is tied to Pete. My first experience with Pete was Opening Day ’62, his rookie season, right to that fateful day in August of ’89 when out he went. Obviously, I don’t agree with everything he’s done. But I feel very close to him. I consider him a friend. He never turned me down for anything. He would write your story for you.

“During the Ty Cobb chase, the national media started coming in. Went to St. Louis for a series and had maybe 30 or 40 people. Went to Chicago for a weekend series and had maybe 60 or 70. We came back here and had 150. It was like a championship series turnout. Anything I asked of him, he always said yes. The most amazing thing to me was that he always had fresh material, fresh stories, some I hadn’t heard before, every day. He was just incredible that way.

“My primary function in ’89 was keeping the Rose situation out of the clubhouse. ABC had the same reporter and a camera crew every day from spring training on. I told all the networks, when the baseball questions are over, you can ask Rose anything you want. It’s up to him if he wants to answer.

“My whole life was built around Rose to a certain extent.”

“He did a lot of things that were considered unorthodox. Anytime you asked him about it, he had a logical reason for every move he made. I always wondered if he made it up (laughing). The big thing now is third ‘time through the order.’ He would tell pitchers, 'I’ll probably let you work out of two jams, but if you get into a third jam, just expect to come out of the game.’ That was Captain Hook.

“A lot of people said to be a successful manager you have to treat everybody the same. He would say, ‘Not a chance. If Bench or Rose came in with a beard, am I going to say you’re benched or traded? Hell no, I’m not!.’ He had his rules, but he took care of the Big Four.

“One spring, we were going to Vero one day and Cocoa the next day and not staying over. Rose, Bench, Perez, they never made those trips. It’s a sellout crowd. I’m sitting in the dugout with Darrell Chaney. Nice ballplayer, but not star power. The crowd’s buzzing. They give the starting lineup and the place goes quieter and quieter. Darrell turns to me and says, ‘Ferg, I never thought I’d be in a major league game and be the biggest name in the lineup and hitting cleanup!’ ”

“There are a million Marge stories that I’m not going to get into, because I decided after I left here, I was never going to do that from a public standpoint. She did a lot of generous things for the community, but in her business with the Reds, she was thrifty, we’ll say.

“She would ask why we have to give the media a different stat sheet every day. I would explain that stats don’t mean anything if they aren’t updated. She would say, ‘Just give them one a week and they can update it themselves.’ It became a big deal how much paper we were wasting. One day there was a manila folder with “173” written on the front. She had assigned somebody to go up to the press box in the ninth inning and count how many pieces of paper there are and put it on my desk. They would say she wanted to talk to me about it, but she never did. It went on for at least two years!”

“I had more fun with Lou in my one season with him. Lou was just a delight to be around. There were some good players on that (’90) team, but nobody saw that coming. In Pete’s years as manager, we finished well in the standings, but we were never in contention for winning. We knew it was going to be a good season, but wire-to-wire? I still wonder, if we hadn’t won that last game in Oakland, we might have lost the World Series, because Eric Davis was hurt and not playing, our pitching was such that Lou didn’t know who was going to start Game 5.”

'It never has got old'

He never strayed far from the game he loves. Sitting in the press box during the Reds’ recent series with the Texas Rangers, keeping score as he always does, his memories are as fresh as the day he walked into the Dayton Daily News for the first time in 1955.

“It never has got old,” he said. “Checking into a hotel at 3 o’clock in the morning got a little tiring.”