Indians take out frustrations on Reds, 19-4 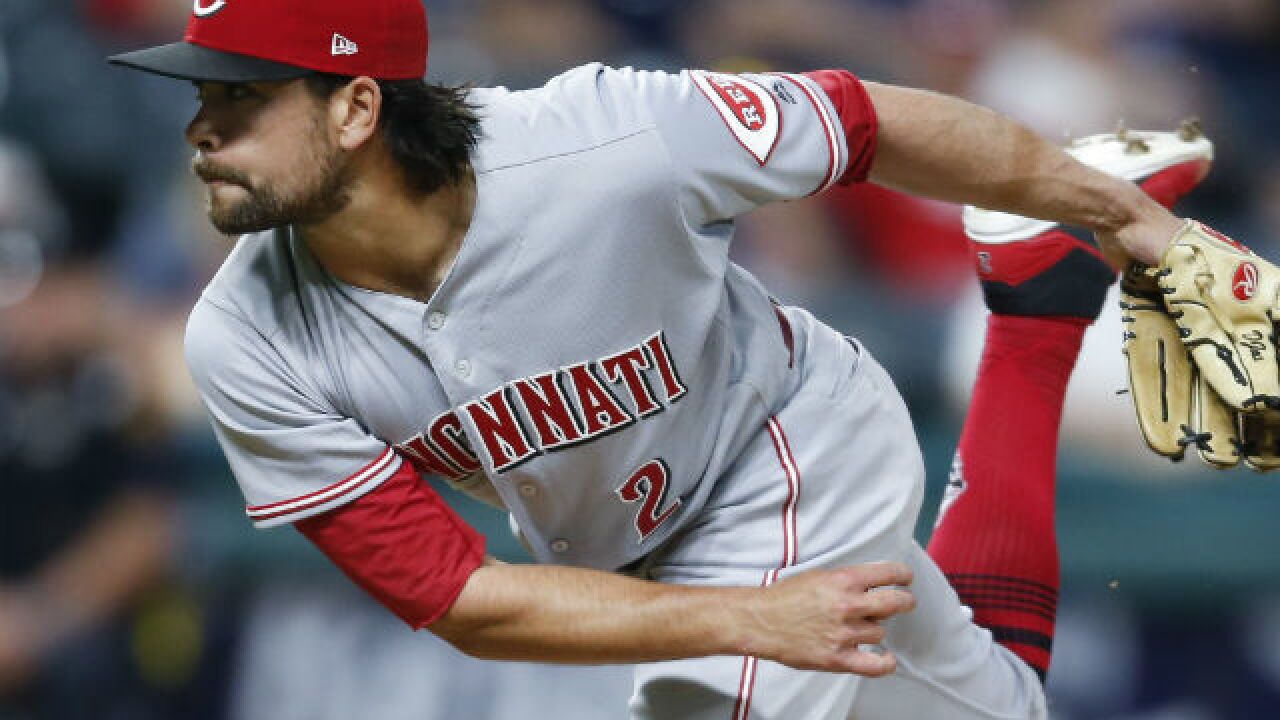 Image copyright 2018 Getty Images. All rights reserved. This material may not be published, broadcast, rewritten, or redistributed.
<p>CLEVELAND, OH - JULY 11: Alex Blandino #2 of the Cincinnati Reds pitches against the Cleveland Indians during the eighth inning at Progressive Field on July 11, 2018 in Cleveland, Ohio. (Photo by Ron Schwane/Getty Images)</p>

CLEVELAND - A day after the Reds shocked them with a seven-run ninth-inning rally, the Indians came back with a vengeance.

Jose Ramirez and Co. took out their frustrations on rookie starter Tyler Mahle and the bullpen, walloping the Reds 19-4 Wednesday night.

“It feels like a couple of losses when you get beat that bad,” said Cincinnati interim manager Jim Riggleman. “But it’s a loss and unfortunately some guys’ personal numbers get affected. But other than that we’ll shake it off, and take the day off and go get them in St. Louis.”

With the game out of hand, Reds infielder Alex Blandino made his major league pitching debut in the eighth. He allowed one hit and struck out two.

“I always thought it was fun to pitch,” Blandino said of his first stint on the mound since he was a high school senior. “I think it went pretty well. I was happy just to get out of the inning. I was trying to throw strikes.”

Jesse Winker and Scooter Gennett homered for the Reds.

Ramirez hit a two-run homer in the first inning off Mahle and connected for a three-run shot in Cleveland’s nine-run third. By the fifth, the Indians were up by two touchdowns and a field goal.

Francisco Lindor connected in the fourth for his 25th homer and Jason Kipnis also homered as the Indians salvaged the interleague series finale and ended a four-game slide.

For the Indians, it was a much-needed rebound after they squandered a 4-0 lead in the ninth on Tuesday night, when manager Terry Francona’s miscommunication with pitching coach Carl Willis on a choice of relievers helped the Reds rally in the ninth.

“It was terrific — on a lot of fronts,” Francona said about Wednesday's rebound. “I think they tried to take me out of it, which is OK. We struck early and we kept going.”

Carlos Carrasco (10-5) reached 1,000 career strikeouts, and given a 17-0 lead, coasted through five innings for his second straight win since coming off the disabled list. Adam Plutko worked four innings for his first career save.

The Indians said Ramirez and Lindor are the first pair of teammates under 25 to hit at least 25 homers before the break.

“It’s a pretty good tandem right there,” Francona said. “They do it in a little different ways. But they’re switch-hitters. They’re both on that side of the infield, and they’re young and they are really good.”

Reds: RHP Homer Bailey (right knee), who has been on the disabled list since June 2, will make two more rehab starts with Triple-A Louisville. Bailey has made five rehab appearances, including four starts. After one relief appearance, general manager Nick Krall said the team decided it was “best if we left him as a starter,” and that Bailey will rejoin the Reds’ rotation when he completes his rehab stint.

Indians: LHP Andrew Miller threw 39 pitches off the Progressive Field mound, a significant step in his recovery from knee inflammation. The club’s top reliever has been out since May 26. Next for Miller is facing hitters, and the Indians hope to have the left-hander match up with some minor leaguers this weekend before they consider activating him after the All-Star break.

Reds: Following an off day, RHP Matt Harvey opens a three-game series in St. Louis against right-hander Carlos Martinez. Harvey has been something of a good luck charm as Cincinnati was just 8-27 before he was acquired on May 8.

Indians: In a matchup of two of baseball’s best, Corey Kluber (12-4) starts the opener of a four-game series against New York and Yankees ace Luis Severino (14-2). Kluber is 5-1 with a 1.80 ERA in seven career regular-season starts against the Bronx Bombers.