Indians pull away from Reds for 10-3 win 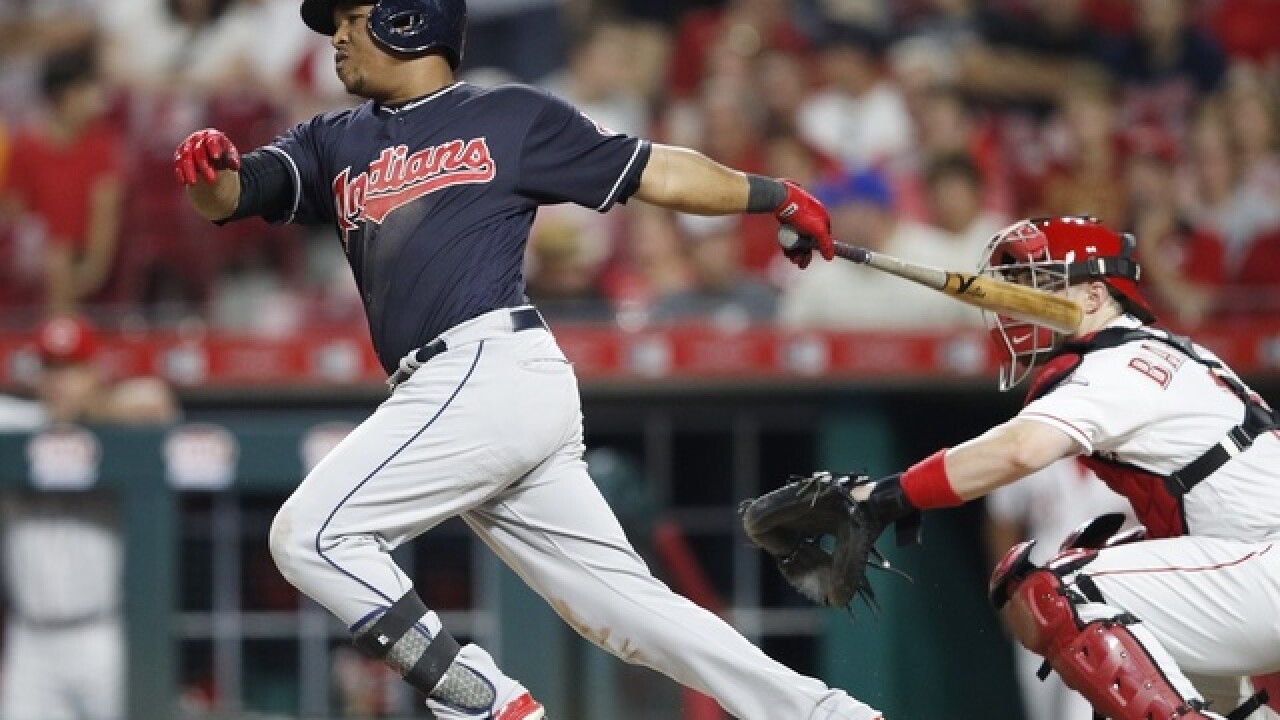 Image copyright 2018 Getty Images. All rights reserved. This material may not be published, broadcast, rewritten, or redistributed.
Joe Robbins
<p>CINCINNATI, OH - AUGUST 13: Jose Ramirez #11 of the Cleveland Indians singles to drive in a run in the seventh inning against the Cincinnati Reds at Great American Ball Park on August 13, 2018 in Cincinnati, Ohio. The Indians won 10-3. (Photo by Joe Robbins/Getty Images)</p>

CINCINNATI (AP) -- Jose Ramirez connected for his 35th homer and Yandy Diaz hit a tiebreaking RBI double in Cleveland's seven-run sixth inning, helping the Indians pull away from the Cincinnati Reds for a 10-3 victory on Monday night.

The Indians increased their AL Central lead to 12 1/2 games over idle Minnesota after receiving an update from team president Chris Antonetti on the status of outfielder Leonys Martin, who is recovering from a life-threatening bacterial infection. Martin is in stable condition at the Cleveland Clinic.

"It was very serious," Antonetti said. "Thankfully he's made a lot of progress in the last 24 to 36 hours and he has regained a lot of the organ function. He's in a good path right now and we're hopeful he'll make a full recovery. But, he has a long way to go."

Tucker Barnhart, Scooter Gennett and Curt Casali homered for last-place Cincinnati, which has dropped two in a row. Homer Bailey (1-10) was tagged for five runs and 10 hits in 5 1/3 innings.

Barnhart hit his eighth homer in the second, putting Cincinnati in front and stopping the Reds' four-game homerless streak.

Gennett tied it at 2 with his 18th homer off Mike Clevinger (8-7) in the fifth, but Cleveland grabbed control in the sixth. Diaz gave the Indians the lead for good when he doubled in Greg Allen.

Diaz scored on Brantley's double. Cabrera added a two-run single, and Kipnis doubled in Ramirez and Brandon Guyer. Gomes tacked on an RBI double that made it 9-2.

Clevinger walked six in five innings, but got his first win since July 1. He allowed five hits and struck out four.

Dixon became the fourth position player to pitch for Cincinnati this year.

The Reds recalled left-hander Cody Reed from Triple-A Louisville and optioned right-hander Keury Mella to the minors. Reed posted a 2.70 ERA with 43 strikeouts in his last 36 2/3 innings. He made 17 starts in the minors but Reds manager Jim Riggleman said he'll begin in the bullpen.

Indians: Trevor Bauer could return to Cleveland on Tuesday to have his sore right ankle examined by team doctors. Bauer was struck by a line drive on Saturday but expects to make his scheduled start on Friday.

Reds: OF Scott Schebler played catch but there is no set timeframe for his return from a sprained right shoulder. He was returned from a rehab assignment last week after experiencing pain while throwing.

Reds: Sal Romano (7-9) has faced the Indians once, allowing three earned runs over 7 1/3 innings on July 10 at Progressive Field.