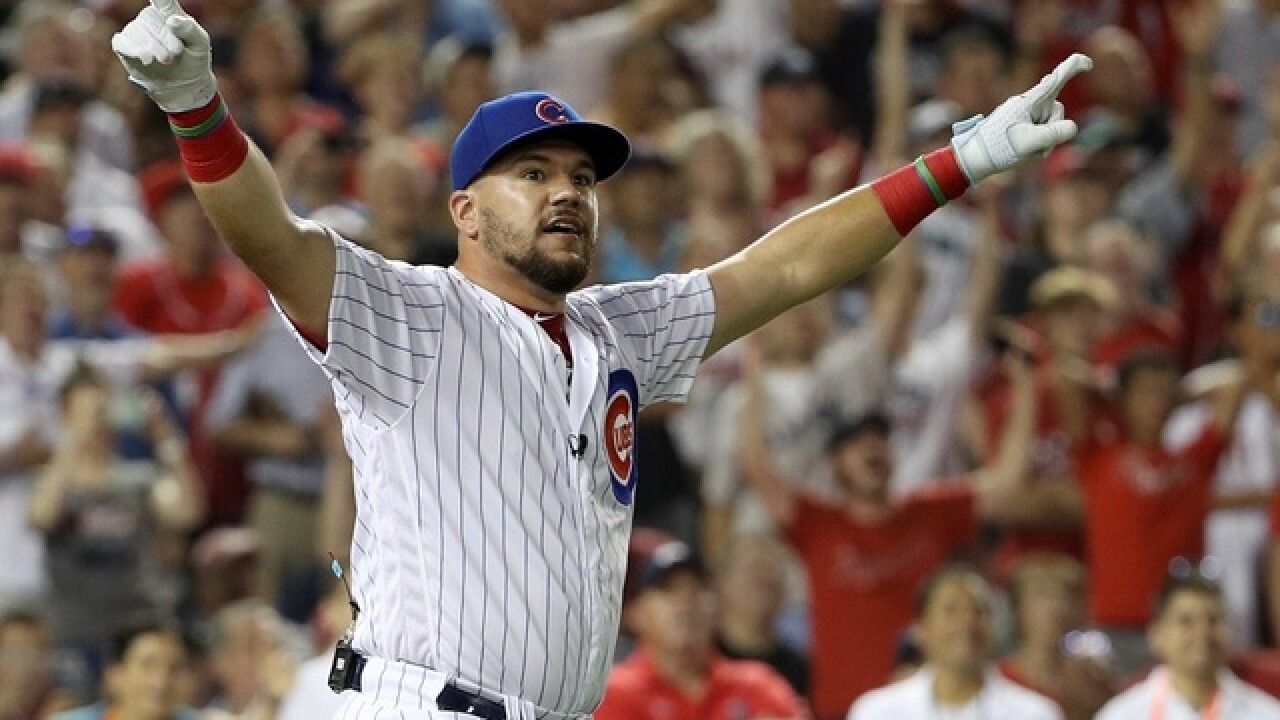 Image copyright 2018 Getty Images. All rights reserved. This material may not be published, broadcast, rewritten, or redistributed.
Patrick Smith
<p>WASHINGTON, DC - JULY 16: Kyle Schwarber of the Chicago Cubs and National League celebrates in the semifinals during the T-Mobile Home Run Derby at Nationals Park on July 16, 2018 in Washington, DC. (Photo by Patrick Smith/Getty Images)</p>

WASHINGTON (AP) -- The ball cleared the center field wall, and the sellout crowd roared. Bryce Harper threw his bat in the air, thrust both index fingers skyward and yelled with delight as a shower of streamers rained upon the crowd of 43,698.

It could have been a scene from a playoff game. That it was merely the All-Star Home Run Derby mattered not to Harper or the Washington Nationals fans, who were thrilled to see their hometown hero deliver the night's final longball Monday.

In the midst of it all -- and in the middle of trying season -- Harper grabbed the microphone and said: "This crowd: Wow! Washington Nationals, baby!"

With an exceptional display of power and clutch hitting, Harper rallied in the final round, connecting on pitches from his father to beat Kyle Schwarber of the Chicago Cubs 19-18.

Harper hit the contest-winning blast in extra time, the reward for hitting two homers at least 440 feet during the 4 minutes of regulation. After he connected with the game winner, the Nationals star immediately went into celebration mode.

"We have some of the best fans in all of baseball, and to be able to that with my family out there, that's an incredible moment, not only for me but for the organization and the Nationals fans," Harper said.

"It's awesome. Hometown," Scherzer said. "The crowd is behind him. He found some rhythm, kept it simple and just continued to hit home run after home run."

Wearing a headband that resembled the District of Columbia flag and displaying a right sleeve with stars and stripes, Harper trailed 18-9 with 1:20 left before rallying. He homered on nine of his last 10 swings before entering extra time.

The six-time All-Star arranged to have his dad, Ron, pitch to him in the annual contest on the eve of the All-Star Game. That made the victory even sweeter.

"I'm only as good as my BP guy," Harper said with a grin.

Hours before the session, Harper spoke excitedly about having his dad pitch to him in the contest. The 25-year-old said his father "worked his tail off every single day to provide for me and my family" and "now being able to have him throw to me in a big league ballpark is the cherry on top."

Afterward, Ron Harper said of his son: "He did great. So I'm really proud of him. He's a great kid. You couldn't ask for anything better."

It's been a tough year for Harper, who's hitting only .214 for the disappointing Nationals. He won a contest that many sluggers avoid, fearful it might wear them out and throw them off.

He can only hope this helps him get back into the swing.

"As soon as I got done with that round I told myself that (Harper) had it," Schwarber said. "I knew that he had the home crowd behind him."

Harper, who has 23 home runs this season, advanced to the final with an astonishing spree of longball hitting. He trailed Max Muncy of the Dodgers 12-4 with 2:20 left, then peeled off six homers in 47 seconds before calling a timeout.

Harper returned to hit three more home runs in 22 seconds, the last of them inside the right-field foul pole.

The semifinal matchup between Schwarber and Philadelphia's Rhys Hoskins went down to the final swing. After stunning top-seed Jesus Aguilar of Milwaukee in the opening round, the eighth-seeded Hoskins ripped 20 long balls to put the pressure on Schwarber.

Using a late surge, Schwarber pulled one ball after another over the right field wall to squeeze out a 21-20 victory -- by far the highest-scoring matchup of the night.

The fans dutifully cheered most home runs during the first round, but they saved their loudest cheers for Harper, the last player to step to the plate.

After Freeman hit 12 home runs over the 4-minute span, Harper unleashed six shots of at least 440 feet and secured the victory with a drive to center long before the clock expired. As the ball cleared the wall, the left-handed hitting Harper walked out of the batter's box and thrust both arms in the air.

Milwaukee's Aguilar, the NL home run leader at the break, was eliminated in the opening round by Hoskins 17-12.

Aguilar hit too many balls to straightaway center, where the wall stands over 400 feet from the plate. Hoskins pumped most of his drives into the left-field seats, where it's 336 feet down the line.

The most thrilling first-round match featured a near buzzer-beater by Houston's Alex Bregman, who fell to Schwarber 16-15. The difference was the pair of homers that Schwarber hit during 30 seconds of extra time.

Bregman -- the lone AL representative -- appeared defeated with a minute left, but he mounted a late surge and lost when his final swing produced a drive that landed at the base of the center-field wall.

Muncy advanced by defeating No. 6 seed Javier Baez of the Cubs, 16-15. Baez hit the longest shot of the Derby, a 479-footer.