Harvey has another strong start as Reds beat Braves, 5-3 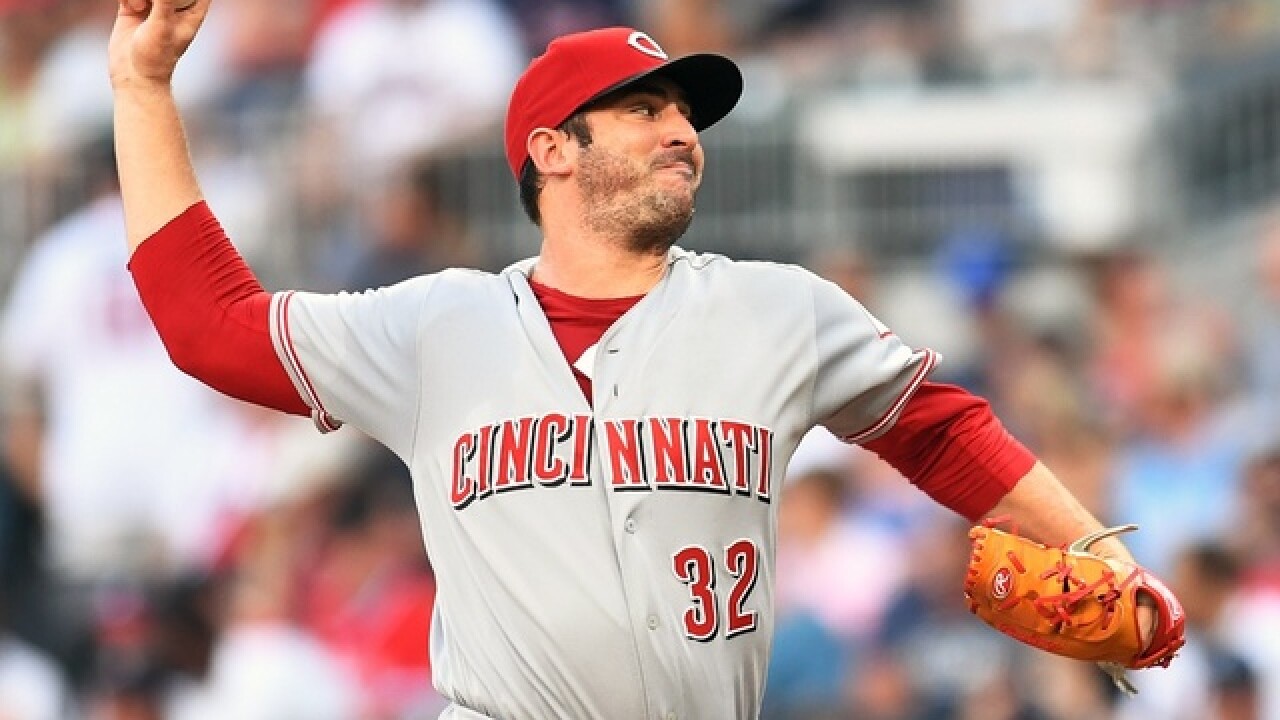 Image copyright 2018 Getty Images. All rights reserved. This material may not be published, broadcast, rewritten, or redistributed.
Scott Cunningham
<p>ATLANTA, GA - JUNE 26: Matt Harvey #32 of the Cincinnati Reds throws a third inning pitch against the Atlanta Braves at SunTrust Park on June 26, 2018 in Atlanta, Georgia. (Photo by Scott Cunningham/Getty Images)</p>

ATLANTA (AP) -- Matt Harvey is starting to discover his old winning form in his new home with the Cincinnati Reds.

Harvey pitched six-hit ball into the seventh inning, earning back-to-back wins for the first time this season and leading Cincinnati to a 5-3 victory over the Atlanta Braves on Tuesday night.

"A start like today where you're facing a good lineup, and you don't have your best stuff, and you grind through it, it's a step in the right direction," Harvey said.

Jesse Winker had three hits and two RBIs for last-place Cincinnati, which has won eight of nine. Scooter Gennett had two hits, including a run-scoring single in the ninth, and scored three times.

Harvey (3-5) allowed one run in 6 2/3 innings in his longest start since lasting seven innings with the New York Mets on April 21, 2017, against Washington.

"I was cruising," Harvey said.

Harvey pitched out of trouble in the fourth when he allowed Tyler Flowers' run-scoring double before stranding two baserunners.

"The more he goes out there, the more comfortable I think he gets," Gennett said. "He's able to command his pitches better and better ... you can see that confidence going up. I'm just really happy he's got an opportunity over here to get back to his normal self and it looks like he's doing that."

It was Harvey's ninth start with the Reds after he was acquired in a trade with the Mets on May 8. He allowed two runs in a 6-2 win over the Cubs on Thursday.

"His breaking ball was really good tonight," Snitker said. "His fastball, his whole game, the whole thing was a lot better than the last time I saw him."

The last time Harvey won consecutive starts was May 23 and May 28, 2017, for the Mets against the Padres and Pirates.

The Reds led 4-1 before Atlanta scored two runs in the eighth. Ender Inciarte reached on a single that bounced off Amir Garrett's left leg, knocking him to the ground and out of the game. Ozzie Albies doubled before Freddie Freeman and Nick Markakis produced run-scoring groundouts.

Raisel Iglesias recorded the final out in the eighth on Johan Camargo's fly ball to right field with runners on first and second, and then pitched the ninth for his 14th save.

Anibal Sanchez (3-2) left with two outs in the fifth inning due to cramping in his right calf, but he is expected to make his next start. He allowed two runs and five hits in 4 2/3 innings.

Reds: X-rays on Garrett's left leg were negative. Garrett tried to chase the deflection before falling to the ground in pain. "At the time when it hit me, it hurt me pretty bad, I'm not going to lie," Garrett said, adding "my leg gave out." He said he hopes to return "in a day or two."

Braves: RHP Arodys Vizcaino (right shoulder inflammation) has felt good playing catch and is expected to throw on the mound when the team begins a weekend series in St. Louis on Friday. If all goes well, Vizcaino could come off the 10-day DL on Sunday.

Right-hander Lucas Sims was sent back to Triple-A Gwinnett only three days after his promotion. Matt Wisler was recalled from Gwinnett and allowed one run in 2 1/3 innings after replacing Sanchez in the fifth.

Reds left-hander Brandon Finnegan is being moved to a relief role at Triple-A Louisville. "We've just got to get him in a role where he can experience some success again," president of baseball operations Dick Williams said.

Atlanta Hawks first-round draft pick Trae Young threw out the first pitch . Young is best known for his 3-point shooting on the court, and he lofted a slow pitch that was caught in the left-handed batter's box.