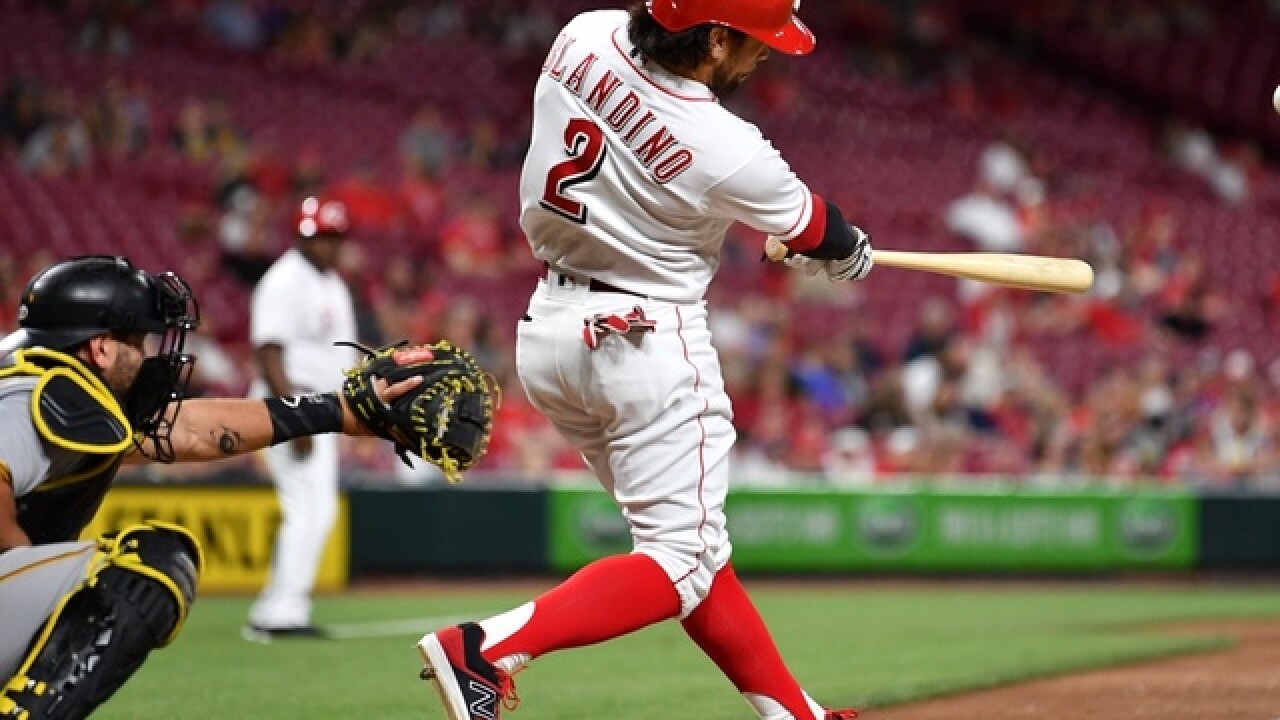 Copyright 2018 Scripps Media, Inc. All rights reserved. This material may not be published, broadcast, rewritten, or redistributed.
Jamie Sabau
<p>CINCINNATI, OH - MAY 23: Alex Blandino #2 of the Cincinnati Reds hits an RBI single in the eighth inning against the Pittsburgh Pirates at Great American Ball Park on May 23, 2018 in Cincinnati, Ohio. Pittsburgh defeated Cincinnati 5-4 in 12 innings. (Photo by Jamie Sabau/Getty Images)</p>

CINCINNATI (AP) -- Josh Harrison tripled in the go-ahead run in the 12th inning -- his fourth hit of the game -- and the Pittsburgh Pirates rallied after wasting a late lead for a 5-4 victory over the Cincinnati Reds on Wednesday night.

The Pirates blew a three-run lead in the eighth before rallying to end their four-game losing streak.

Jordy Mercer was on first base after reaching on a fielder's choice when Harrison tripled into the corner in right field off Dylan Floro (1-1). Mercer avoided Tucker Barnhart's tag and slid his left hand across the tip of plate to break the 4-4 tie.

Left-hander Steven Brault (4-1) pitched two innings. Kyle Crick escaped a bases-loaded threat in the 12th for his first career save, retiring Brandon Dixon on a grounder to end it.

Francisco Cervelli hit a two-run homer, and starter Chad Kuhl drove in another run with a bunt single as the Pirates pulled ahead 4-0. The Pirates wasted chances to break the game open by leaving the bases loaded twice.

Kuhl allowed only one run while pitching into the seventh -- Scooter Gennett homered for the second straight game. The Reds tied it in the eighth as closer Felipe Vazquez blew his second straight save chance.

Eugenio Suarez had a sacrifice fly off Michael Feliz. Vazquez came on with two outs and two aboard and gave up RBI singles by Alex Blandino and Jose Peraza that tied it 4-4. Vazquez is 9 for 11 in save opportunities.

Cervelli connected on Homer Bailey's 10th pitch of the game for a 2-0 lead. Corey Dickerson singled home another run in the fifth.

The Pirates got the first two runners aboard in in the sixth to bring up Kuhl. His hard bunt skipped past Suarez at third base for a single that made it 4-0 and ended Bailey's outing.

The Reds put closer Raisel Iglesias on the 10-day DL before the game with a strained biceps in his left (non-throwing) arm, along with reliever Austin Brice (strained back). They activated reliever Michael Lorenzen and called up reliever Tanner Rainey. Both pitched in the game.

Pirates: Cervelli took a ball off his right hand while blocking a pitch in the dirt. He left after the 11th inning.

Reds: RHP Anthony DeSclafani is scheduled to make his third rehab start on Friday for Triple-A Louisville. He's been sidelined since spring training by a strained oblique.

Pirates: Ivan Nova (2-4) is 0-3 with a 4.73 ERA in six starts since his last win on April 15 at Miami. Last season, he lost all of his four starts against Cincinnati, three of them at Great American Ball Park.