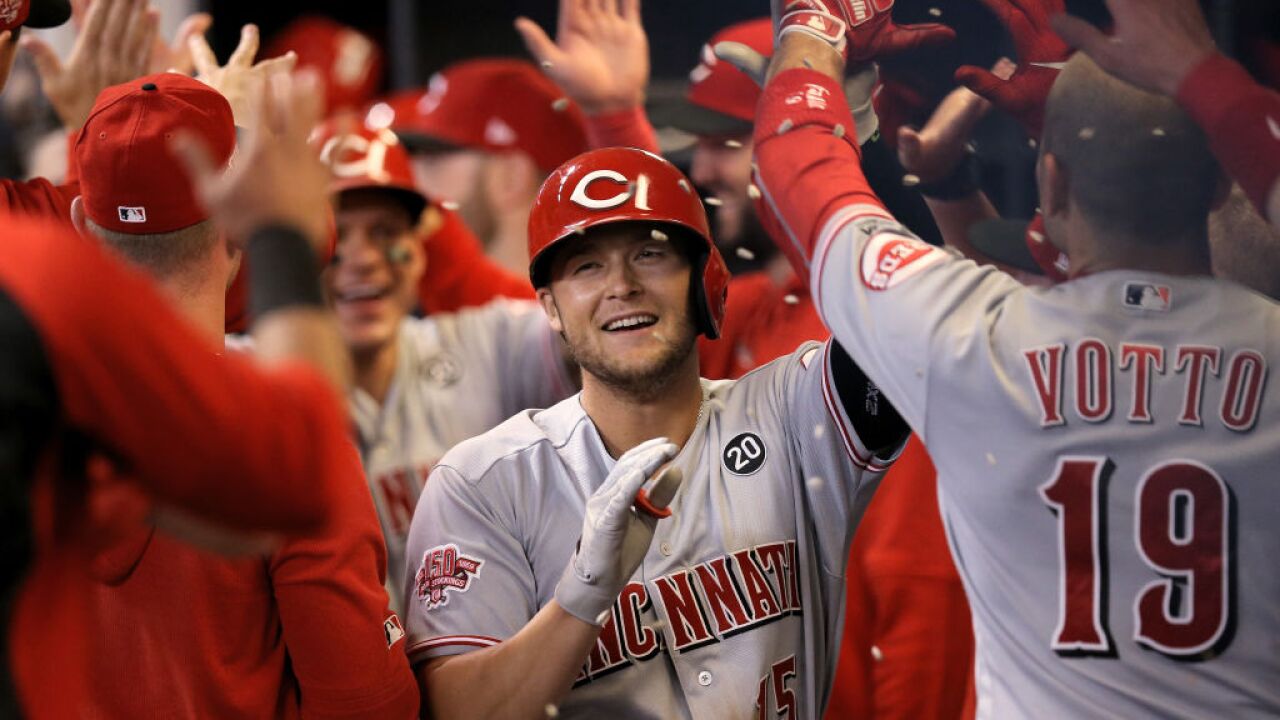 Grandal led off for the first time in his career and homered in his opening at-bat to help the Milwaukee Brewers snap a season-high five-game losing streak with a 6-5 win over the Cincinnati Reds on Saturday.

"We were down 3-0, and the home run just jolted us," Counsell said, adding that Grandal will bat first again Sunday.

Grandal, who had never batted first in 795 career games, put the Brewers ahead 5-4 with an RBI double in the fourth. Two outs later, he scored on Lorenzo Cain's bloop single that chased Reds starter Luis Castillo (7-2).

"I knew I hit it pretty hard, but I didn't think it would be a homer," Grandal said. "I was more worried about not getting thrown out at second by (right fielder Yasiel) Puig."

The Reds tallied three times in the first for the third consecutive game of the series. This time, though, the Brewers answered in their half with four runs, highlighted by Grandal's 17th home run on the second pitch of the game.

"Momentum definitely changed," Grandal said. "It got the offense going."

Derek Dietrich had an RBI triple and Puig hit his 16th home run of the season, a two-run shot, before a slick play and a successful challenge by the Brewers ended the Reds' opening frame.

Second baseman Mike Moustakas snared Iglesias' grounder up the middle and flipped the ball from his glove to shortstop Arcia who fired to first. After a 61-second review, the safe call was overturned.
Counsell said that defensive glove work also helped switch the momentum.

"The play by Moose and Arcia changed the vibe coming into the dugout after the first inning," Counsell said. "Then Yaz leads off with a homer. We put together some really good at-bats after that and got right back in it."

NL MVP Christian Yelich scored a run, but went 0 for 3 to end his career-high hitting streak and the longest in the majors at 18 games.

Matt Albers (4-2) pitched 1 1/3 innings of scoreless relief. Adrian Houser handled the seventh. Josh Hader struck out four of the final six outs for his 18th save.

"Their bullpen pitched outstanding," Reds manager David Bell said. "They had Hader there for two at the end."

Castillo had won seven straight decisions since a 1-0 loss to Milwaukee on April 3rd, but couldn't get out of the fourth. He allowed six runs, four earned, on five hits with five walks and six strikeouts in 3 2/3 innings.

"It looked like he was struggling a little bit with his release point," Bell said after the loss snapped the Reds' season-high six-game winning streak . "He couldn't quite find it. It happens."

Eugenio Suárez hit his 16th home run of the season in the third and added a run-scoring groundout in the fifth off Brewers starter Jhoulys Chacín.

Reds: OF Nick Senzel left Friday night's game with a headache after homering in the fourth. He struck out pinch-hitting in the seventh and stayed in the game in center.

Brewers: Struggling RHP Jimmy Nelson (0-2, 9.75 ERA) has been dropped from the rotation after three dismal starts. The hope is that pitching out of the bullpen gets the burly right-hander on track after missing 21 months following a right shoulder injury. Nelson made four rehab starts and was recalled June 5 from Triple-A San Antonio.

Dietrich got plunked in the fifth by reliever Alex Claudio. It was his third straight game he's been hit and sixth overall this series, which according to Elias Sports Bureau, makes him the first players in the modern era (since 1900) to be hit by a pitch six times in a series of any length.

Friday night, he tied a major league record and became the first Reds player in the modern era (since 1900) to be hit by a pitch three times in one game, according to Elias.

While Dietrich was with the Marlins from 2013-18, he was hit a franchise record 93 times and the second-most in the majors over those six seasons, behind Anthony Rizzo of the Cubs (111).

Reds: RHP Anthony DeSclafani (4-3, 4.22 ERA) makes his 100th career appearance and 92nd career start when he faces the Brewers for the second time this season. He took a 4-3 loss on April 2 at Great American Ball Park.