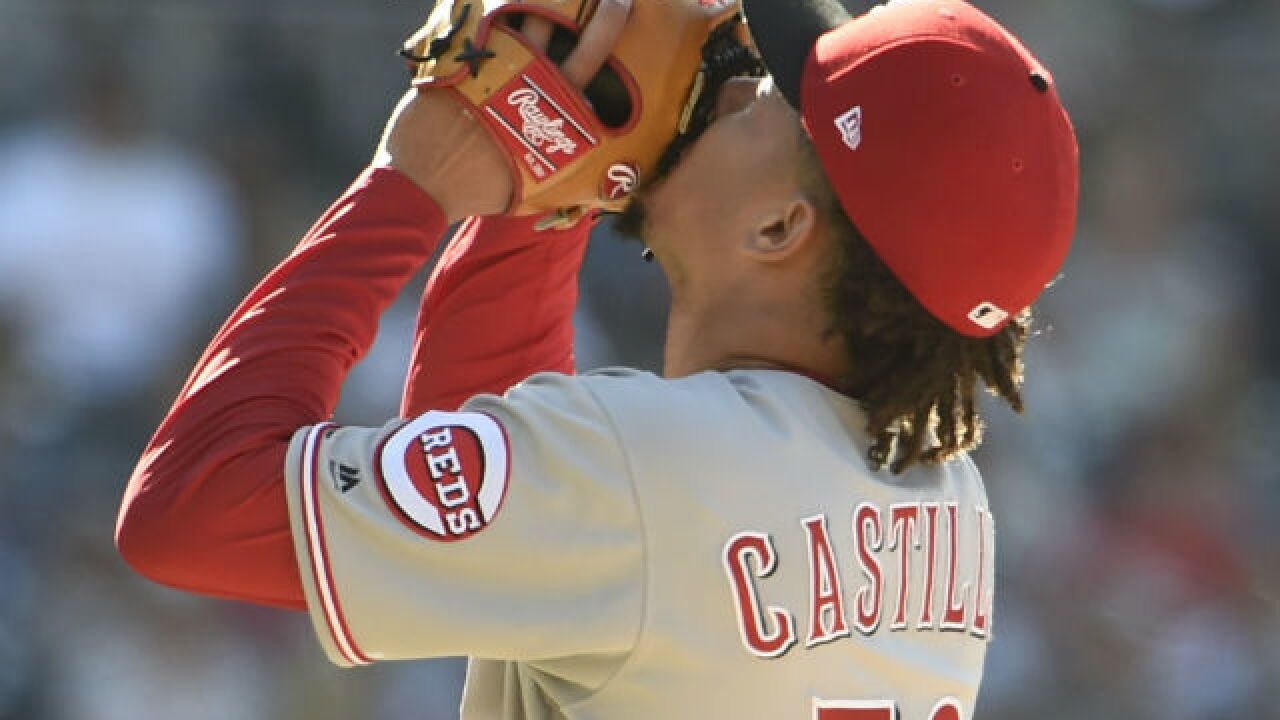 Image copyright 2018 Getty Images. All rights reserved. This material may not be published, broadcast, rewritten, or redistributed.
<p>SAN DIEGO, CA - JUNE 3: Luis Castillo #58 of the Cincinnati Reds leaves the game in the fifth inning of a baseball game against the San Diego Padres at PETCO Park on June 3, 2018 in San Diego, California. (Photo by Denis Poroy/Getty Images)</p>

SAN DIEGO, Calif – With the bases loaded, Luis Castillo said he was trying to get a ground ball.

With one out, Hunter Renfroe, pinch-hitting for the pitcher, said he was just trying to hit the ball in the air.

Renfroe drove a 1-2 pitch from Castillo off the second deck in left field in the fifth inning and sent the Reds to a 6-3 loss to the Padres on Sunday.

“I didn’t execute that pitch,” Castillo said. “He put a good swing on it and he hit a grand slam. I was focused on getting a ground ball to turn a double play. but sometimes things don’t go the way you want to and he hit a homer.”

Castillo (4-6) had loaded the bases on singles by Franmil Reyes and Freddy Galvis, and a walk to Manuel Margot. Reyes was forced at home on Raffy Lopez’s dribbler before Renfroe’s slam.

Castillo allowed four runs and six hits in 4 2/3 innings, struck out three and walked one.

“I was pitching really good for the first inning ,then after that I don’t know what happened in the fifth and I lost the battle today,” he said.

The Reds took a 2-0 lead, then the game “turned on us real quick,” said interim manager Jim Riggleman. “They put four on the board and such a huge hit by Renfroe.”

The Reds (21-39) got solo homers by Eugenio Suarez (11th) and Scooter Gennett (12th) and collected 12 hits, but not enough when they needed them. They went 1-for-5 with runners in scoring position and left nine runners on base.

Padres starter Tyson Ross (5-3) allowed Suarez’s leadoff homer to left in the second and Scooter Gennett’s RBI single in the fifth. He gave up two runs and seven hits in five innings, struck out three and walked two. He has won three straight decisions over four starts.

With the Padres leading 5-2, closer Brad Hand faced the heart of the Reds’ order in the eighth.  Joey Votto, who had three hits, struck out, but Hand then allowed a homer to Gennett, his 12th. Suarez struck out, Adam Duvall singled and Jose Peraza flied out.

Cory Spangenberg homered for San Diego in the eighth, his fourth. Kirby Yates pitched the ninth for his first save. Votto came up with two on and two outs and grounded out to end it.

Reds: RHP Sal Romano (3-6, 6.00) is scheduled to start the opener of a three-game home series against Colorado on Tuesday night. Colorado will counter with LHP Kyle Freeland (5-5, 3.43).

Padres: LHP Clayton Richard (3-6, 4.74) is scheduled to start the opener of a three-game home series against NL East leader Atlanta on Monday night. He is 2-2 with a 3.22 ERA in his last five starts, with 29 strikeouts and five walks. The Braves will counter with RHP Julio Teheran (4-3, 4.03).