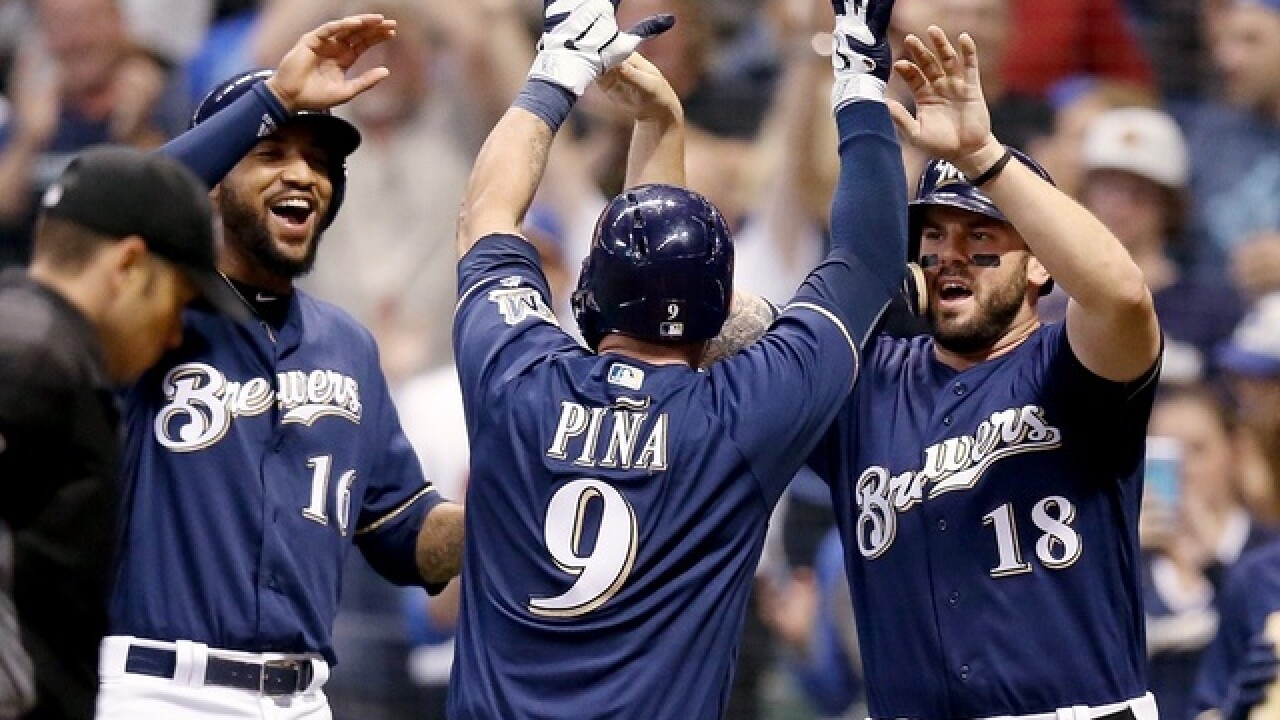 Image copyright 2018 Getty Images. All rights reserved. This material may not be published, broadcast, rewritten, or redistributed.
Dylan Buell
<p>MILWAUKEE, WI - SEPTEMBER 19: Domingo Santana #16, Manny Pina #9, and Mike Moustakas #18 of the Milwaukee Brewers celebrate after Pina hit a home run in the sixth inning against the Cincinnati Reds at Miller Park on September 19, 2018 in Milwaukee, Wisconsin. (Photo by Dylan Buell/Getty Images)</p>

Manny Pina also had a three-run shot and Aguilar finished with four RBIs. Gonzalez's stellar showing helped the Brewers boost their lead for the top NL wild card to three games over St. Louis, which lost to Atlanta earlier.

The Brewers began the day trailing the first-place Cubs by 3½ games in the NL Central. Chicago played later at Arizona.

Gonzalez (9-11) was acquired in a trade with Washington on Aug. 31 in an effort to bolster the Brewers' starting rotation. The left-hander has picked up a victory in two of his three starts with Milwaukee, and the Brewers have won all three games.

He allowed just two hits Wednesday while striking out five and walking two.

Reds right-hander Matt Harvey (7-9), a pitcher the Brewers nearly acquired a few weeks ago before a proposed deal fell through, gave up Aguilar's game-changing home run.

A leadoff walk to Gonzalez put Harvey in trouble in the third inning. Christian Yelich reached on a one-out infield hit when no one covered first base on a bouncer fielded by Harvey.

Aguilar followed with a high drive into the right-field bleachers, his team-leading 33rd home run of the season, to give Milwaukee a 4-0 lead.

The Brewers scored in the first on a double by Yelich, a passed ball and an RBI infield single by Aguilar.

Milwaukee broke open the game in the sixth on a three-run homer by Pina, who worked a 13-pitch at-bat, finally belting a hanging slider into the left-field bleachers. Domingo Santana tripled and Mike Moustakas was intentionally walked before Pina's ninth homer of the season extended the lead to 7-0.

Corey Knebel, Junior Guerra and Freddy Peralta finished up for Milwaukee, each pitching one inning.

Brewers manager Craig Counsell has not given up on catching the Cubs for a division title.

"We've just got to keep winning," Counsell said. "If we're not playing that team, it's a little out of our control. They're going to have to lose some games, eventually.

"We're just going to have to keep winning and stay alive."

The Brewers have nine games remaining, six on the road (three vs. Pittsburgh and three vs. St. Louis) and the final three at home (against Detroit).

Milwaukee ended its homestand with a 3-3 record against the Pirates and Reds.

Brewers: CF Lorenzo Cain was not in the lineup after being taken out of Tuesday's game with a right ribcage injury. Counsell said he wanted to be cautious with Cain, who ranks fourth in the NL in batting average (.308). The Brewers are off Thursday and Cain will be reassessed before Friday's series opener in Pittsburgh. "I definitely don't want to miss a game," Cain said. "They told me that I'm not looking myself up there right now." Santana got the start in right field -- his first game as a starter since June 12 -- and Yelich moved to center with Curtis Granderson in left. Infielder Travis Shaw was back in the lineup after being hit by a pitch Tuesday and leaving the game with a bruised right knee.

Reds: LHP Cody Reed (0-2, 4.32 ERA) will make his fifth consecutive appearance as a starter as Cincinnati opens a four-game series in Miami. He posted a career-high 10 strikeouts in five innings against the Chicago Cubs on Saturday, allowing no runs and two hits in a game the Reds lost 1-0.