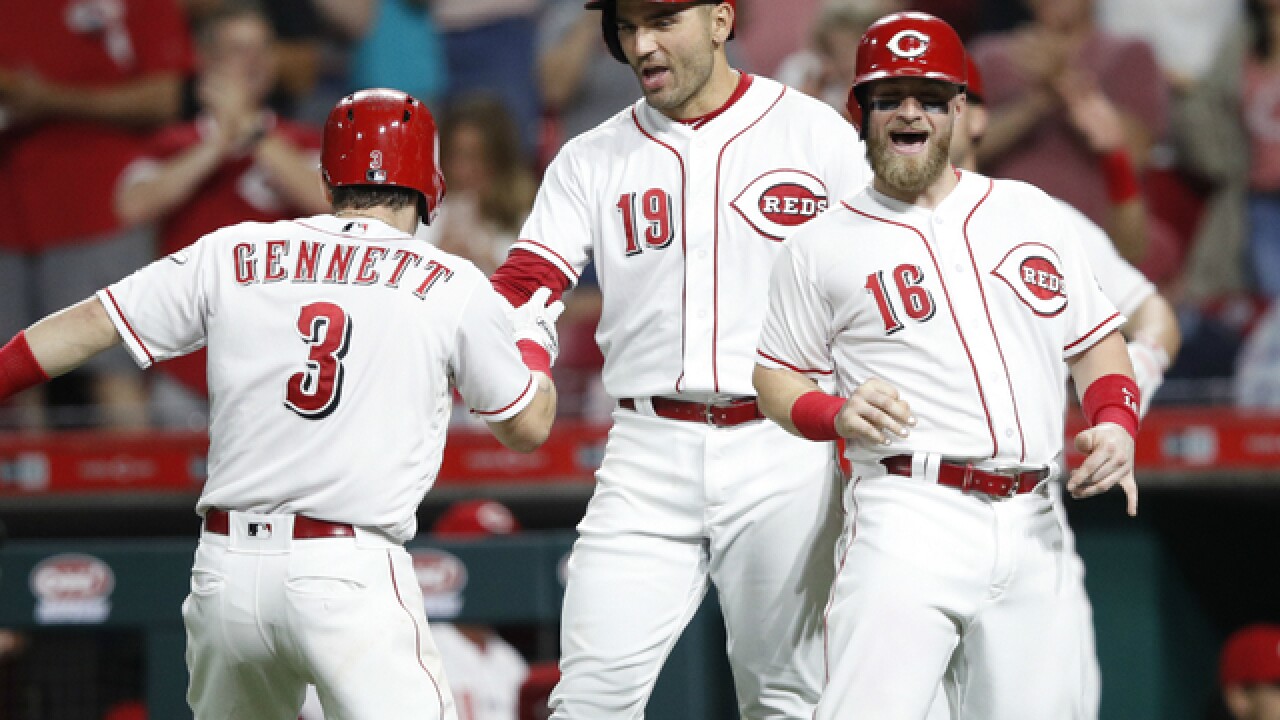 Copyright 2018 Scripps Media, Inc. All rights reserved. This material may not be published, broadcast, rewritten, or redistributed.
Joe Robbins | Getty Images
<p>CINCINNATI, OH - MAY 22: Scooter Gennett #3 of the Cincinnati Reds celebrates with Tucker Barnhart #16 and Joey Votto #19 after hitting a grand slam in the fifth inning against the Pittsburgh Pirates at Great American Ball Park on May 22, 2018 in Cincinnati, Ohio. The Reds won 7-2. (Photo by Joe Robbins/Getty Images)</p>

CINCINNATI -- So far, Matt Harvey is making good on his second chance.

The former Mets ace allowed only one run over six innings for his first win with the Cincinnati Reds, and Scooter Gennett hit his fifth grand slam in the last two seasons on Tuesday night for a 7-2 victory over the Pittsburgh Pirates.

The Reds traded catcher Devin Mesoraco to the Mets for Harvey on May 8, giving him a chance to revive a career that had bottomed out. Harvey (1-2) has thrown more pitches each outing as he gets back into form after being relegated to the Mets bullpen.

He is looking a little better each time out, too. He limited the Pirates to three hits.

"It was a good step for me," Harvey said. "There were times earlier this year when I thought I might not get another win in the big leagues. It was good to get that first one."

The Pirates loaded the bases in the first with the help of a pair of walks, but Harvey escaped the threat by fanning Colin Moran for the first of his five strikeouts. Moran hit a solo homer in the fourth.

Harvey has thrown 55, 77 and 93 pitches in his starts for Cincinnati. He has yielded four runs and 11 hits in 14 innings.

Gennett led the majors with a club-record four grand slams last season. He got his first of this season off Jameson Taillon (2-4), connecting on a high changeup in the fifth inning. Taillon hasn't won in eight starts since he threw a one-hitter to beat the Reds on April 8 at PNC Park.

The Pirates intentionally walked Joey Votto to load the bases and bring up Gennett, who has grounded into six double plays, tied for the most on the team.

"It definitely makes sense what they did," Gennett said. "I think Joey's the best hitter in baseball. I definitely didn't take it personally, but I do like getting up there with the bases loaded."

Gennett also had an RBI double in the first inning and a sacrifice fly in the seventh for a season-high six RBIs. His career high is 10 RBIs during his four-homer game against St. Louis last June 6.

The Pirates dropped their fourth in a row overall.

A storm delayed the start for 65 minutes. There have been two postponements at Great American Ball Park this season and six rain delays totaling 8 hours, 1 minute.

Pirates center fielder Austin Meadows hit his second homer in as many games off Amir Garrett in the seventh inning, leaving him 6 for 15 in his first four major league games. Meadows faced Garrett in the minors and knew what to expect.

"He hung a slider," Meadows said. "I faced him a lot (in Triple-A) the last couple years. I knew he had that slider and he went to it."

Slumping Reds catcher Tucker Barnhart batted second for the first time in the majors and went 3 for 4 with a double. He had never batted higher than fifth in the order. Barnhart entered in a 1-for-17 slump.

Cincinnati called up utility player Brandon Dixon, who had never played in the majors, and optioned infielder Rosell Herrera to Triple-A Louisville. Herrera batted .154 in 11 games with no homers or RBIs. Dixon pinch-hit and flied out.

Pirates: CF Starling Marte (strained right oblique) is accompanying the team on its trip. He's eligible to be activated from the DL on Saturday.

Reds: RH Michael Lorenzen worked out with the Reds pregame and is expected to be activated before Wednesday's game. He has been on the DL since spring training with a strained right shoulder. He pitched two innings Sunday in a rehab appearance.