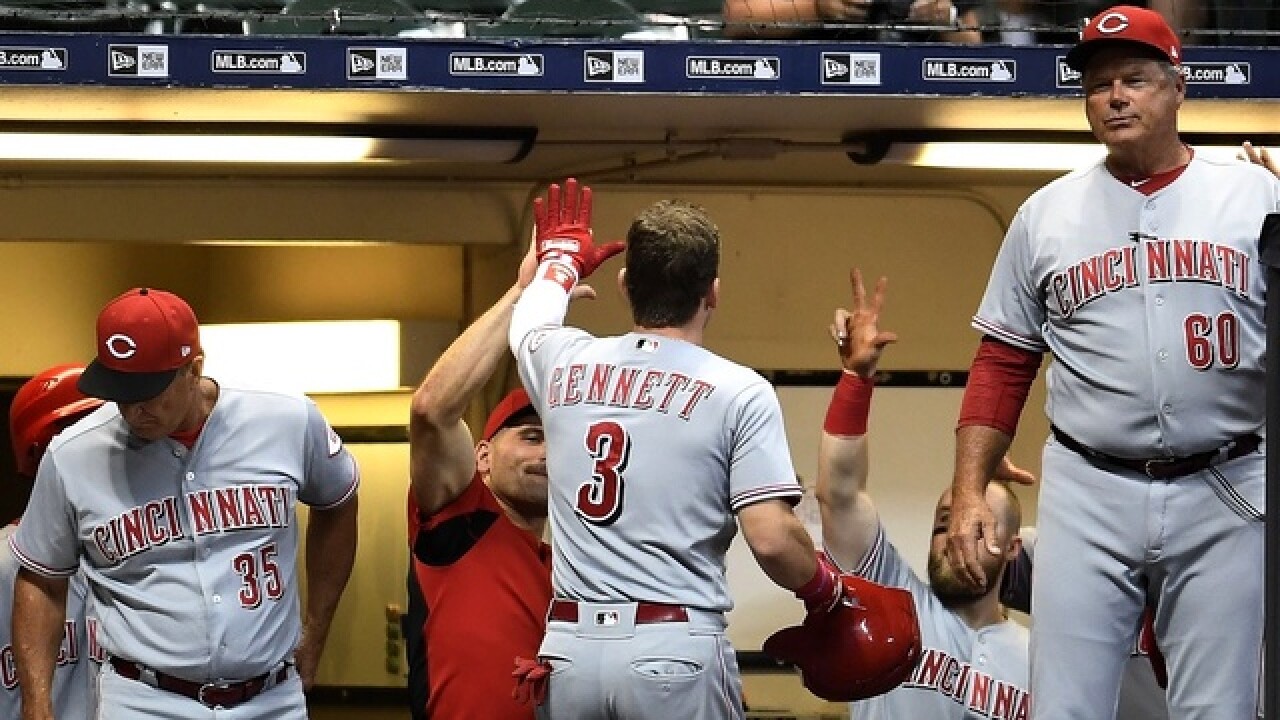 Copyright 2018 Scripps Media, Inc. All rights reserved. This material may not be published, broadcast, rewritten, or redistributed.
Stacy Revere
<p>MILWAUKEE, WI - AUGUST 21: Scooter Gennett #3 of the Cincinnati Reds is congratulated by teammates following a home run during the ninth inning of a game against the Milwaukee Brewers at Miller Park on August 21, 2018 in Milwaukee, Wisconsin. (Photo by Stacy Revere/Getty Images)</p>

Gennett hit a tiebreaking solo homer with two out in the ninth, helping the Cincinnati Reds beat Milwaukee 9-7 and prevent the Brewers from gaining ground in the National League playoff race.

Gennett drove a first-pitch slider from Dan Jennings (4-5) into the first row of the right-field bleachers. Cincinnati added an insurance run on Mason Williams' RBI double against Corey Knebel.

Milwaukee had tied the game in the eighth on Jonathan Schoop's first career pinch-hit homer and Ryan Braun's RBI double. The Brewers remained three games back of the NL Central-leading Chicago Cubs, who lost 2-1 at Detroit.

Raisel Iglesias (2-1), who yielded Braun's tying double, escaped a ham in the ninth for the win. The Brewers put two runners on with two out, but Keon Broxton struck out swinging.

The Reds rallied after the Brewers jumped on Sal Romano for four runs in the first inning. Erik Kratz had a two-out RBI single, and Orlando Arcia followed with a two-run single.

Travis Shaw hit his 26th homer in the bottom half, but Cincinnati added four more in the fourth.

The big inning included a ball that hit second base umpire Hunter Wendelstedt and went for an RBI single for Ervin. Gennett's dribbler past the mound scored a run and a passed ball allowed another run to score.

All four runs were unearned after third baseman Mike Moustakas' throwing error allowed the first run of the inning, on a fielder's choice grounder by Brandon Dixon.

Reds: OF Scott Schebler (right shoulder) was scheduled to continue his rehab with Double-A Pensacola. He could join the Reds in Chicago for the opener of their four-game series against the Cubs on Thursday.

Brewers: RHP Zach Davies (right shoulder) will make a rehab start for Double-A Biloxi on Wednesday and a decision on his status will be made soon. He has been on the disabled list since June 1. General manager David Stearns said it was fair to consider Davies "a wild card” at this point in the season. ... RHP Joakim Soria threw 25 pitches off the mound and could return by the weekend, according to manager Craig Counsell.

Reds: RHP Robert Stephenson (0-1, 6.75 ERA) will make his third start of the season in the series finale against Milwaukee. He went 6-0 with a 1.23 ERA in his last seven starts at Triple-A Louisville.