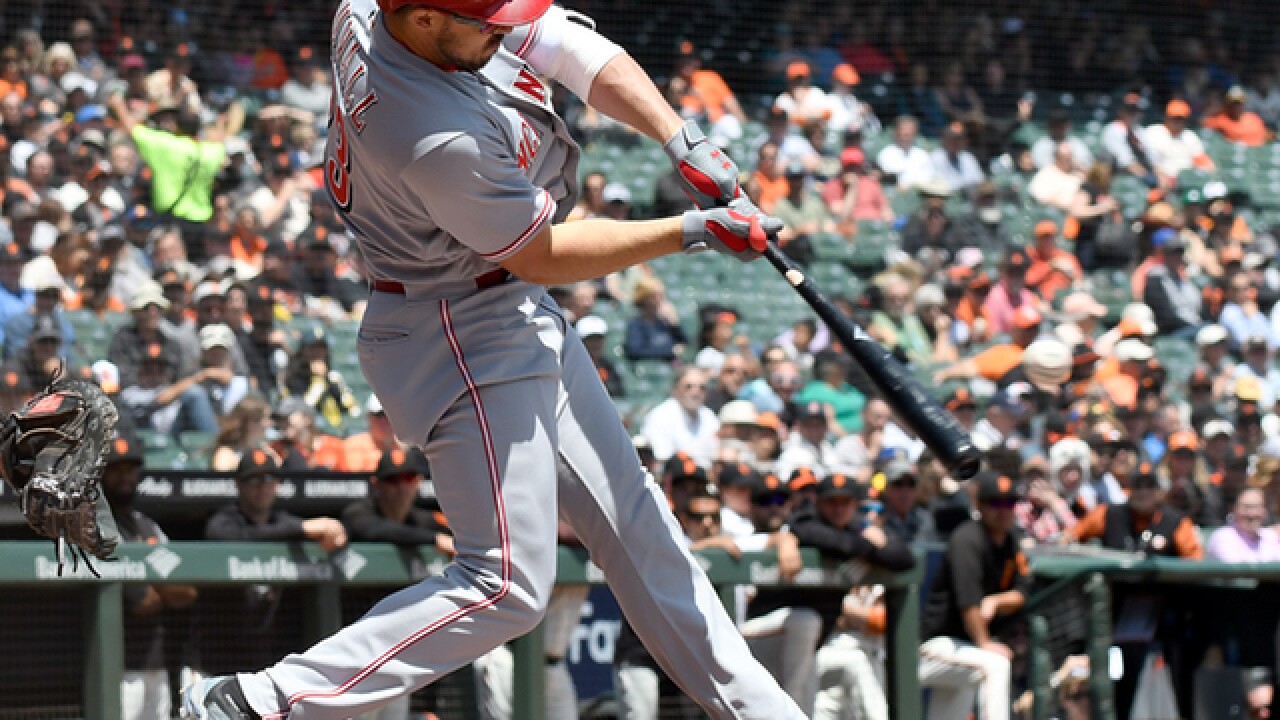 Image copyright 2018 Getty Images. All rights reserved. This material may not be published, broadcast, rewritten, or redistributed.
Thearon W. Henderson
<p>SAN FRANCISCO, CA - MAY 16: Adam Duvall #23 of the Cincinnati Reds hits a three-run home run against the San Francisco Giants in the top of the first inning at AT&T Park on May 16, 2018 in San Francisco, California. (Photo by Thearon W. Henderson/Getty Images)</p>

SAN FRANCISCO (AP) — Scooter Gennett homered a half-inning after the second baseman saved two runs with a diving catch on a difficult popup, helping the Cincinnati Reds avoid a sweep by the San Francisco Giants with a 6-3 win Wednesday.

Adam Duvall hit a three-run homer in the first, and Matt Harvey went four innings in his second start since joining the Reds from the Mets. Reliever Jared Hughes (2-2) pitched two scoreless innings as Cincinnati won for the seventh time in nine games.

With the bases loaded and two outs in the sixth, Gennett somehow chased down a popup by pinch-hitter Gorkys Hernandez along the right-field line near the visiting bullpen — scissoring his legs over right fielder Scott Schebler to make the tough, potentially game-saving grab.

The Reds stopped a five-game skid against the Giants and avoided what would have been San Francisco's first three-game sweep of Cincinnati since May 3-5, 2002.

Staked to a 4-0 lead, Harvey nearly gave all of it back. Andrew McCutchen hit an RBI double in the first and scored on Pablo Sandoval's sacrifice fly, Brandon Belt homered leading off the third.

Harvey, who pitched four scoreless innings in his Cincinnati debut last Friday, struck out the side in the fourth. He allowed three runs, seven hits and four walks in his first outing against the Giants since June 2015.

Duvall also made a tremendous catch in left-center to steal a likely extra-base and turn Sandoval's drive into a sacrifice fly.

Pinch-hitter Brandon Crawford singled leading off the ninth against Reds closer Raisel Iglesias, who finished the 2-hour, 41-minute game for his eighth save. Crawford, whose hit was his 10th in the past 13 at-bats, ended Iglesias' streak of 17 straight batters retired.

Cincinnati added an insurance run in the fifth on a passed ball that got by backup catcher Nick Hundley.

Belt homered in a fifth straight game against the Reds, a streak dating to May 13 last year. Barry Bonds had been the previous Giant to clear the fences in five consecutive games vs. one opponent, against San Diego in six straight games from April 12 to June 20 in 2001, according to STATS.

1B Joey Votto returned to the starting lineup after sitting out Tuesday with back tightness. He left Monday's game with the back issue. ... RHP Michael Lorenzen, on the disabled list all season with a strained pitching shoulder, allowed one walk in an otherwise clean inning during a rehab assignment for Double-A Pensacola against Biloxi.

Following an off day at home, RHP Homer Bailey (1-5, 5.59 ERA) makes his team-high 10th start in the opener of a series with the Cubs.