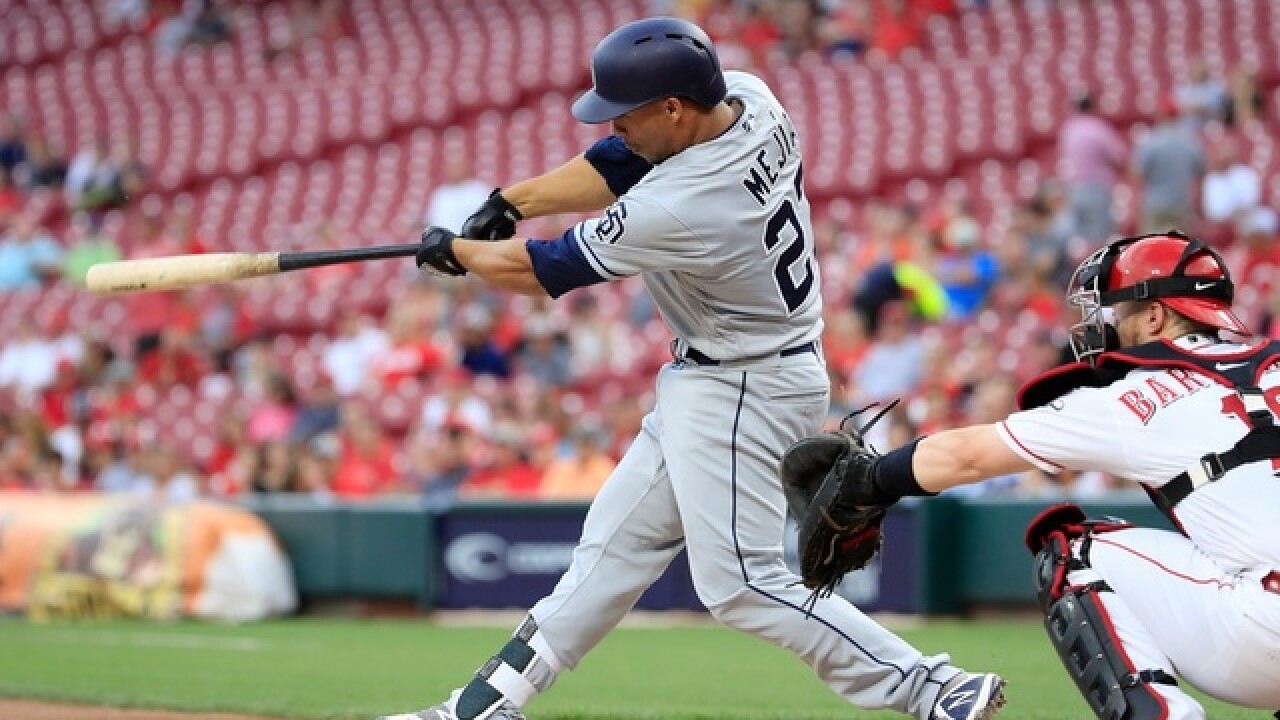 Image copyright 2018 Getty Images. All rights reserved. This material may not be published, broadcast, rewritten, or redistributed.
Andy Lyons
<p>CINCINNATI, OH - SEPTEMBER 06: Francisco Mejia #27 of the San Diego Padres hits a home run in the third inning against the Cincinnati Reds at Great American Ball Park on September 6, 2018 in Cincinnati, Ohio. (Photo by Andy Lyons/Getty Images)</p>

CINCINNATI (AP) -- Francisco Mejia felt nervous in the early innings of his first game behind the plate for the Padres. All he needed was one swing to settle in.

Mejia hit a solo homer and a three-run shot during his first start as the team's up-and-coming catcher on Thursday night, leading San Diego to a 6-2 victory over the Cincinnati Reds.

Mejia connected on his first two swings against Luis Castillo (8-12) for his first homers in the majors . The 22-year-old prized prospect was called up Tuesday as the Padres get him ready for a bigger role next season.

He made quite a debut.

"Two really good swings, loud contact both ways," manager Andy Green said. "They tried to sneak a couple fastballs by him, and he's proven really quickly he can hit a fastball. He did a nice job behind the plate, too. He's literally getting a crash course on every reliever when they come into the game."

The Padres got Mejia from Cleveland in a July trade for relievers Brad Hand and Adam Cimber as the AL Central leaders tried to overhaul their struggling bullpen. Mejia hit seven homers at Triple-A after the deal, and the Padres called him up to start getting him ready for bigger things.

He's expected to catch roughly half the games the rest of the way, getting to know an unfamiliar pitching staff. In his first game, he didn't let the challenge of handling six new pitchers affect his offense.

"I think I've done a good job preparing myself," Mejia said through a translator. "I've learned how to divide and separate those two things."

Mejia hit fastballs of 96 and 97 mph on consecutive swings off Castillo, who already knew the catcher could hit.

"I faced him in spring training," Castillo said. "We live near each other in the Dominican and we practice together."

Hunter Renfroe also hit a solo homer off Castillo , who gave up three for the first time in his career.

Left-hander Eric Lauer made his second start since returning from a stint on the disabled list with a sore forearm that cost him 25 days. He threw five hitless innings during a 3-2, 13-inning win over Colorado on Aug. 30 in his return.

Lauer allowed two hits in four innings Thursday, matching his career high with eight strikeouts. He escaped a bases-loaded, no-out threat in the fourth with a pair of strikeouts and Renfroe's lunging grab.

"Renfroe's catch in left field was the play of the game," Green said. "That changed the complexion of everything."

Jose Castillo (2-2) retired the three batters he faced. Scott Schebler and Mason Williams homered off Trey Wingenter in the seventh.

The Reds held a moment of silence pregame for victims of a downtown shooting on Thursday morning. A gunman killed three people and wounded two others before he was fatally shot by police officers.

Lauer made his 20th start, joining Joey Lucchesi at the mark. The last time the Padres had two rookies make 20 starts in a season was 1977. It's the fourth time overall.

Franmil Reyes was so angry at himself for striking out on a low pitch in the fourth inning that he slammed his bat on the ground and broke it over his right thigh while heading back to the dugout.

Mejia is the first Padres player to homer in the first two at-bats of his first start. He's the 13th catcher in Padres history to hit two or more homers in a game. The last was Austin Hedges last season at Philadelphia.

Reds: Scooter Gennett was out of the lineup with a tender thigh. He leads the NL in hitting at .320. ... LH reliever Amir Garret threw in the bullpen and could be activated next week. He's been on the DL since Aug. 29 with a bruised left foot.

Padres: Brett Kennedy (1-2) makes his sixth career start and his first against the Reds. He threw six shutout innings on Aug. 31 for a 7-0 victory over Colorado, his first career win.

Reds: Anthony DeSclafani (7-4) makes his 17th start and third career appearance against the Padres, his first since 2016. He lasted only 3 2/3 innings last Sunday in St. Louis, giving up two runs and five hits while throwing 72 pitches.