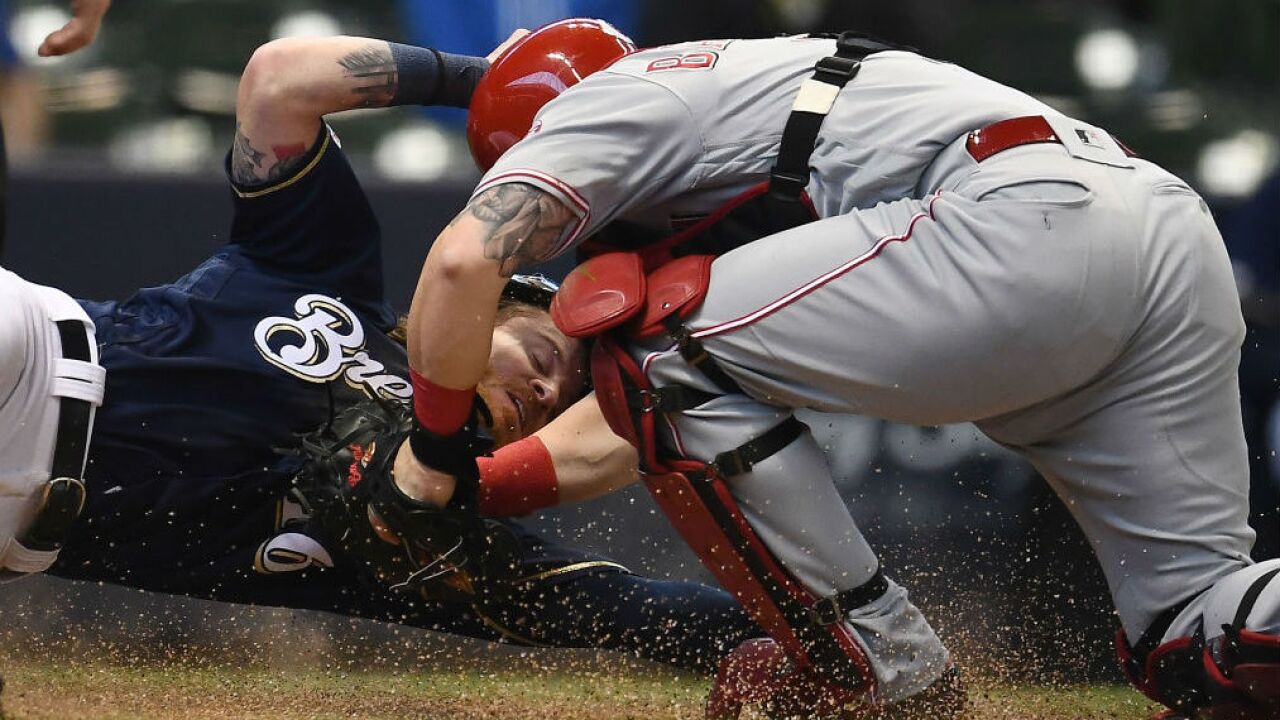 The umpire called it foul, so Phillip Ervin’s bases-loaded drive down the right-field line in the seventh inning didn’t count as a ground-rule double and it didn’t tie the score.

To make matters worse, Ervin struck out into a bizarre inning-ending double play, and the Brewers went on to win Wednesday afternoon’s slugfest 11-9.

When Ervin went down swinging against Brewers reliever Jeremy Jeffress, the ball zipped past catcher Yasmani Grandal and caromed off the back wall right back to the catcher. Grandal threw to first, where Curt Casali strayed off the bag, assuming the runners would advance. But Derek Dietrich stayed at third and Casali, with no place to go, was tagged out after an extended rundown.

"The ball gets past the catcher and a lot of times as a runner, you just react," Reds manager David Bell offered in explanation.

"That's a play we work on every day," Brewers manager Craig Counsell said, laughing. "We caught a break there, 100 percent."

A day after suffering their first shutout of the year against the Reds, the Brewers got their revenge.

Grandal’s two-run homer highlighted a five-run sixth inning, allowing the Brewers to finally climb out of a 5-0 hole and take an 11-8 lead.

Instead of a game-tying rally in the seventh, the Reds were limited to one run after loading the bases on an Eugenio Suarez walk, Dietrich's hit-by-pitch and a Jose Iglesias single.

Suarez scored when Casali was hit by a pitch, but that was all they got.

It was supposed to be a pitchers’ duel between Cincinnati’s Luis Castillo and Milwaukee’s Zach Davies, two of the National League’s ERA leaders.

But the hitters sent both starters to the showers early.

Castillo said he couldn't execute his best pitch, the changeup.

"I didn't trust that pitch today. I was using it, but more like in fastball counts," he said.

"They were pretty aggressive," Davies said of the Reds' batters. "That's where my pitch execution comes in and I just didn't have it today."

The Reds jumped ahead 5-0 in the second inning on Tucker Barnhart’s three-run homer and Josh VanMeter’s two-run double. But that didn’t last long.

Milwaukee’s Keson Hiura homered off Castillo in the bottom of the second.

That closed the gap to 6-4, and the Brewers tied it in the fourth on Eric Thames’ two-run single off reliever Michael Lorenzen.

The Reds recaptured the lead, 8-6, in the fifth on Iglesias’s two-out, two-run single.

But the Brewers got to Reds relievers Wandy Peralta and David Hernandez for five hits, a hit batsman and an RBI sacrifice fly in the sixth.

Brewers: Christian Yelich will "go through a bunch of treatments today and see how he is," Counsell said before the game. "He's had some muscle issues in his back but they've been short-term, five-day injuries. That's not a chronic characterization, for me."

Reds: OF Yasiel Puig, who suffered a sprained right shoulder after making a catch in right field and crashing into the padded wall in Cincinnati on Sunday, didn't play Wednesday for the second straight game. Bell said he expects Puig to return to the lineup Friday after an off-day for the team on Thursday.

Reds LHP Amir Garrett has recorded his last nine outs by strikeout, most recently retiring the side that way in the eighth inning on Tuesday against the Brewers. "It may not be the ninth (inning), but he's pitching in situations that are as important as they get," Bell said.

Brewers: Open a three-game series at home against the Philadelphia Phillies on Friday. The Brewers will put RHP Chase Anderson (2-0, 2.66) against RHP Jerad Eickhoff (2-2, 3.23).