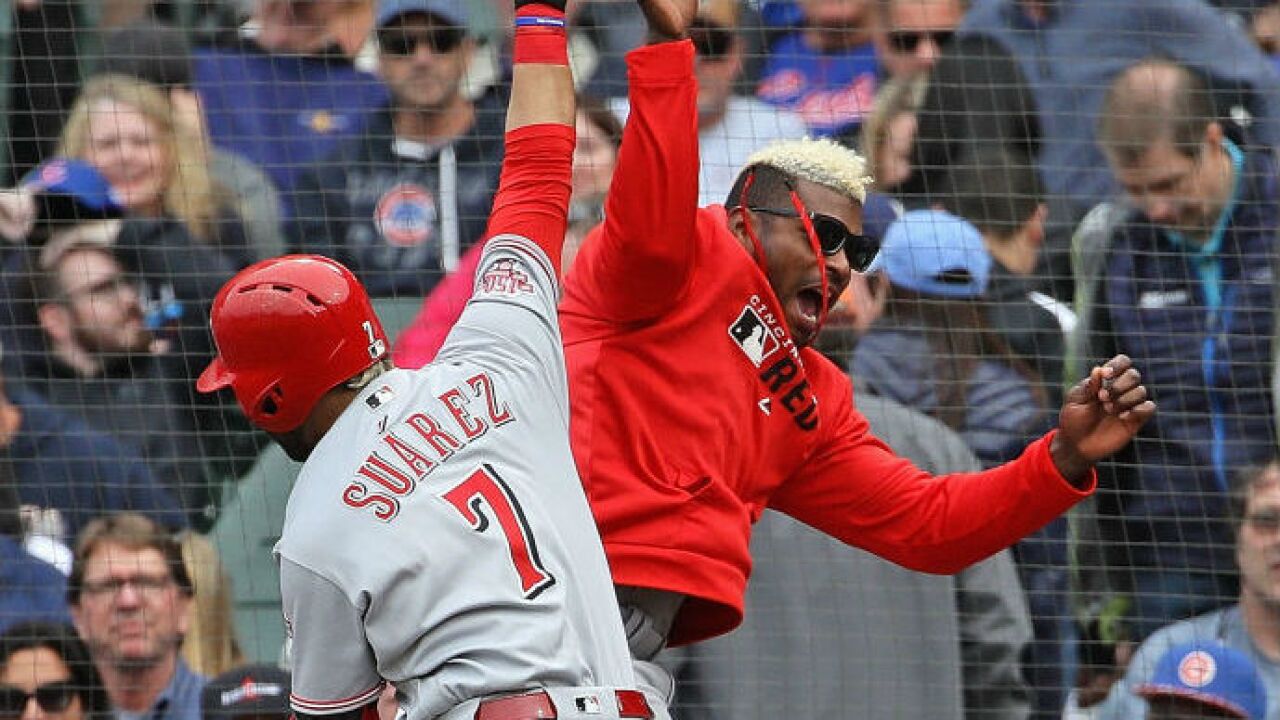 Jonathan Daniel/Getty Images
CHICAGO, ILLINOIS - MAY 24: Yasiel Puig #66 of the Cincinnati Reds celebrates with Eugenio Suarez #7 after Suarez hit the game-winning two run home run in the 9th inning against the Chicago Cubs at Wrigley Field on May 24, 2019 in Chicago, Illinois. The Reds defeated the Cubs 6-5. (Photo by Jonathan Daniel/Getty Images)

CHICAGO — Was that the Reds' best win of the season, Manager David Bell?

''It doesn't get much better than that. A lot of things have to go right. Guys came through,'' Bell said. ''I think it's right up there in the top couple, for sure.''

Eugenio Suarez's two-run homer in the top of the ninth gave the Reds a 6-5 comeback win over the Cubs Friday afternoon.

The Cubs led 4-0 but Yasiel Puig helped the Reds rally back. Puig, who injured his shoulder Sunday, returned to the lineup with a two-run homer and an RBI single. Jesse Winker added an RBI double.

Joey Votto started the ninth inning with a walk and Michael Lorenzen ran for him. Suarez followed with his 14th homer of the year off Steve Cishek (1-2).

''Everybody knows (Cishek) is a tough pitcher, with his sidearm (motion), he's got a really good sinker. But at that time, he missed that ball right down the strike zone and I was ready for his fastball.''

David Hernandez (1-2) got the win despite giving up Willson Contreras' go-ahead single in the eighth and only retiring one batter. Raisel Iglesias pitched a 1-2-3 ninth for his 11th save.

But five Reds relievers worked 5 1/3 innings and held the Cubs to one run on three hits. Wandy Peralta and Matt Bowman each pitched 1 1/3 scoreless innings. Amir Garrett also pitched 1 1/3 and was tagged for the run.

''We put a lot on them and they came through,'' Bell said.

Schwarber hit his first career leadoff homer, a 449-foot drive bounced on the rear aisle of the right-field bleachers and on to Sheffield Avenue.

After Schwarber walked with two outs in the third, Bryant lifted his 12th homer to right-center. Rizzo followed with his 14th, striking the right field scoreboard for the second time in three games to make it 4-0.

Votto's bloop double to center with one out in the fourth gave Cincinnati its first hit and baserunner. After Hendricks hit Winker with a pitch, Puig lined an RBI single.

Puig's two-run shot off Hendricks to left-center in the sixth closed it to 4-3. The Reds tied it 4-all in seventh off Brad Brach on three straight hits with two outs.

Garrett entered with one out in the seventh and notched his 10th straight out by strikeout (over four appearances) when he got Schwarber looking. Bryant ended Garrett's string with a comebacker to the 6-foot-5 Reds left-hander to close out the inning.

The Reds recalled RHP Matt Bowman from and optioned OF Phillip Ervin to Triple-A Louisville. Bowman entered in the sixth and retired four hitters.

The Cubs recalled RHP James Norwood and returned RHP Rowan Wick to Triple-A Iowa. Norwood is 1-0 with a 4.95 ERA and three saves with Iowa. Wick was called up on Wednesday and gave up one run in one inning in Chicago's 9-7 loss to Philadelphia on Thursday.

Cubs: RHP Pedro Strop (left hamstring strain) is scheduled for another bullpen session Saturday. Manager Joe Maddon considers Strop's return as key to shoring up the Cubs' inconsistent bullpen. ''The (Cubs') biggest weakness - it's no big secret - the bullpen, we've had different issues with that,'' Maddon said. ''Getting Stropy back is huge.''

Reds RHP Tyler Mahle (1-5, 3.51) faces Cubs RHP Yu Darvish (2-3, 5.06) on Saturday. Darvish doesn't have a decision in four previous starts, but in his last two has struck out 18 while trimming his walks to three. Mahle got his first win a week ago against the Dodgers after starting the season with five losses.