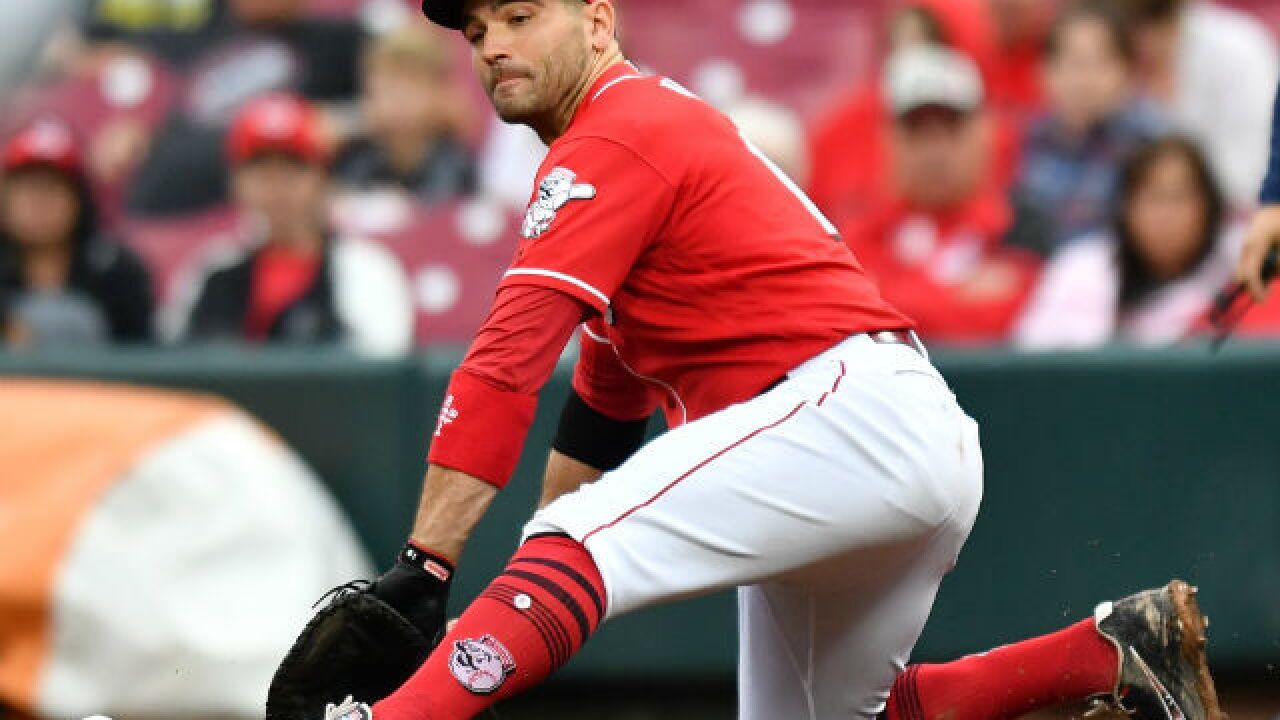 Image copyright 2018 Getty Images. All rights reserved. This material may not be published, broadcast, rewritten, or redistributed.
<p>CINCINNATI, OH - SEPTEMBER 9: First baseman Joey Votto #19 of the Cincinnati Reds scoops a low throw for the out in the fifth inning against the San Diego Padres at Great American Ball Park on September 9, 2018 in Cincinnati, Ohio. (Photo by Jamie Sabau/Getty Images)</p>

Eric Hosmer led off the ninth inning with a home run to lift the Padres to a 7-6 win after a lengthy rain delay in the middle of the eighth inning.

"We don't make too many excuses for the home runs," Rigggleman said. "We give up a lot of homers, but that was a Great American Ball Park homer. Hosmer's a good hitter, but this might be the only ballpark it goes out of."

Down 6-1, the Reds tied with the Padres with a five-spot in the fifth, when Votto tagged his second homer in days after going 36 games without one.

Votto had a chance to tie the game again with two outs in the ninth, but his long drive to right-center died on the warning track.

Rain caused a delay of 1 hour, 32 minutes in the eighth, even after Sunday’s first pitch was pushed back three hours from the scheduled 1:10 p.m. start time in hopes of avoiding bad weather. Saturday’s game started an hour earlier than scheduled and was cancelled after 6 ½ innings, resulting in the Reds’ rain-shortened 7-2 win.

Rain delayed the last three games of the four-game series for a total of 5 hours, 22 minutes of waiting.

Hosmer said he and his teammates were glad to be leaving soggy Cincinnati.

"It seemed like it was a week long, and we were in this clubhouse the entire time," Hosmer said of the lengthy series. "We were happy to get out of a day like this with a win. Basically, we just wanted to get the heck out of here. That's what everybody was thinking."

Craig Stammen (7-2) pitched the eighth and Kirby Yates the ninth for his seventh save.

Rookie Tyler Mahle, making his first start since being recalled from Triple-A Louisville and taking Homer Bailey’s rotation slot, lasted only three trouble-filled innings. The Padres placed at least two runners on base in each inning and cashed in with Hedges’ 12th homer of the season in the third. Mahle, in his first Reds start since Aug. 6, allowed five hits and two runs with three walks and five strikeouts.

The Reds were hitless through the first three innings before collecting seven hits and scoring six runs in the next two against San Diego starter Jacob Nix. The rookie right-hander walked two batters and struck out a career-high five in five innings.

Padres: Rookie RHP Brett Kennedy won’t make his next scheduled start while dealing with swelling in his left knee that developed after trying to bunt Friday against Cincinnati.

Reds: LHP Amir Garrett is ready to be activated from the disabled list, interim manager Jim Riggleman said. Garrett has been out since August 29 with a bruised left foot.

Padres: RHP Bryan Mitchell (1-3), coming off his first San Diego win, makes his first career appearance against Seattle with a start Tuesday. He allowed two hits and one run in five innings Tuesday at Arizona.

Reds: LHP Cody Reed (0-2) is scheduled to make his first career against the Dodgers in Monday’s three-game series opener. Reed allowed a career-high nine hits in five innings of his last start on Tuesday in Pittsburgh.