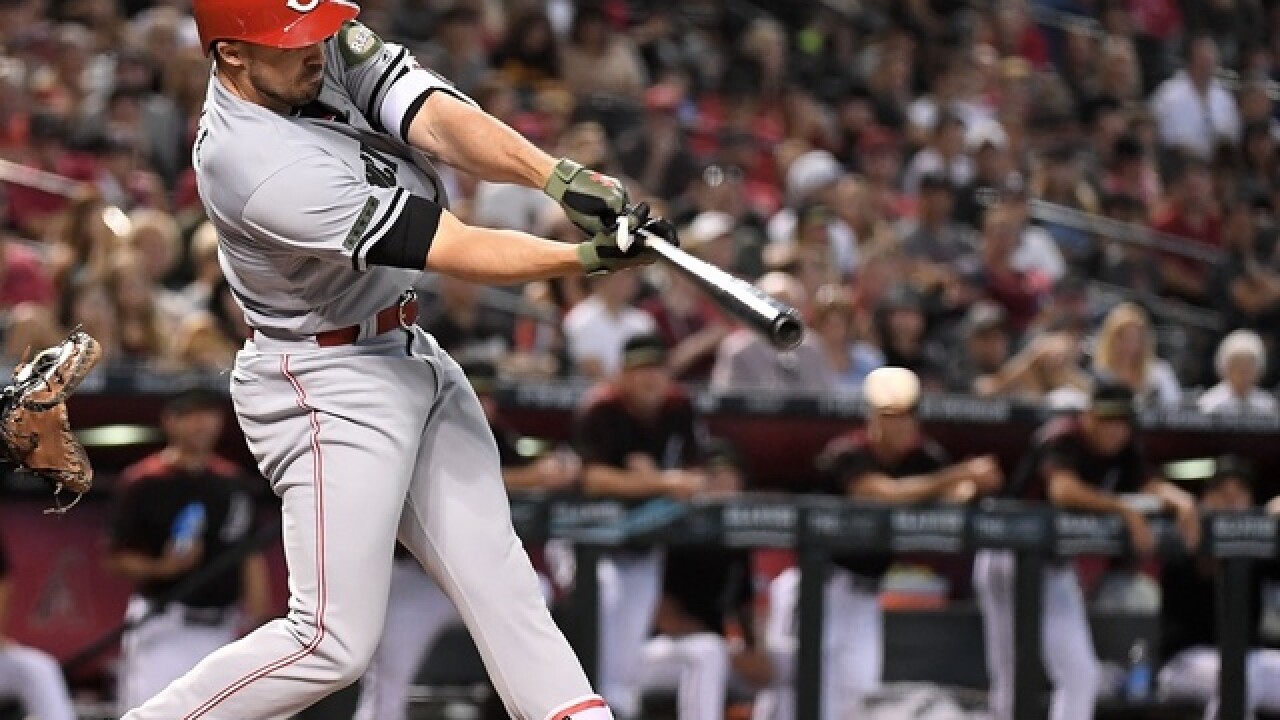 Image copyright 2018 Getty Images. All rights reserved. This material may not be published, broadcast, rewritten, or redistributed.
Jennifer Stewart
<p>PHOENIX, AZ - MAY 28: Adam Duvall #23 of the Cincinnati Reds hits an RBI single in the second inning of the MLB game against the Arizona Diamondbacks at Chase Field on May 28, 2018 in Phoenix, Arizona. MLB players across the league are wearing special uniforms to commemorate Memorial Day. (Photo by Jennifer Stewart/Getty Images)</p>

Scott Schebler added a tiebreaking two-run drive in the sixth, helping the last-place Reds salvage the finale of the three-game set. Joey Votto and Eugenio Suarez each had three hits.

Both of Cincinnati's homers came off Patrick Corbin (5-2), who gave up a season-high six runs and eight hits in six innings.

Paul Goldschmidt and John Ryan Murphy went deep for the Diamondbacks, who have dropped 16 of 20 overall.

Cincinnati right-hander Sal Romano (3-6) pitched five innings in his first win since May 4, yielding four runs and seven hits. He was 0-3 with a 12.79 ERA in his previous three starts.

Raisel Iglesias got four outs for his ninth save in his first appearance since being sidelined by a biceps injury. Pinch hitter Daniel Descalso and Jarrod Dyson singled to start the ninth but Goldschmidt fouled out, Duvall made a sliding grab of Jake Lamb's sinking liner to left and Murphy popped out.

Corbin was cruising with a 4-0 lead when Tucker Barnhart and Votto opened the fourth with singles and Suarez walked on a 3-2 pitch to load the bases. That brought up Duvall, who hit a drive into the seats in left-center for his second career grand slam.

Suarez opened the sixth with a single, Duvall struck out and Schebler launched a shot 433 feet to right.

It was a disappointing finish for Arizona after a fast start.

Dyson led off the first with a single and Goldschmidt, moved up to second in the batting order in recent games, knocked Romano's 1-1 pitch into the visitor's bullpen for his seventh homer of the season. After Jake Lamb flew out, Murphy doubled to the left-center gap and scored on David Peralta's single, sliding in just ahead of Billy Hamilton's throw from short center field.

Murphy's fourth home run in his last six games made it 4-0 after three.

Reds: Iglesias threw a 45-pitch bullpen session on Monday without any negative results, setting the stage for his reinstatement.

Diamondbacks: RHP Shelby Miller, recovering from Tommy John surgery, threw five innings in his first rehab start for Class A Visalia on Tuesday night, allowing a run and four hits. He struck out eight with no walks.

Reds: Following an off day, Tyler Mahle (3-6, 4.76 ERA) starts Friday night at San Diego. The Reds finish a nine-game trip with three against the Padres.