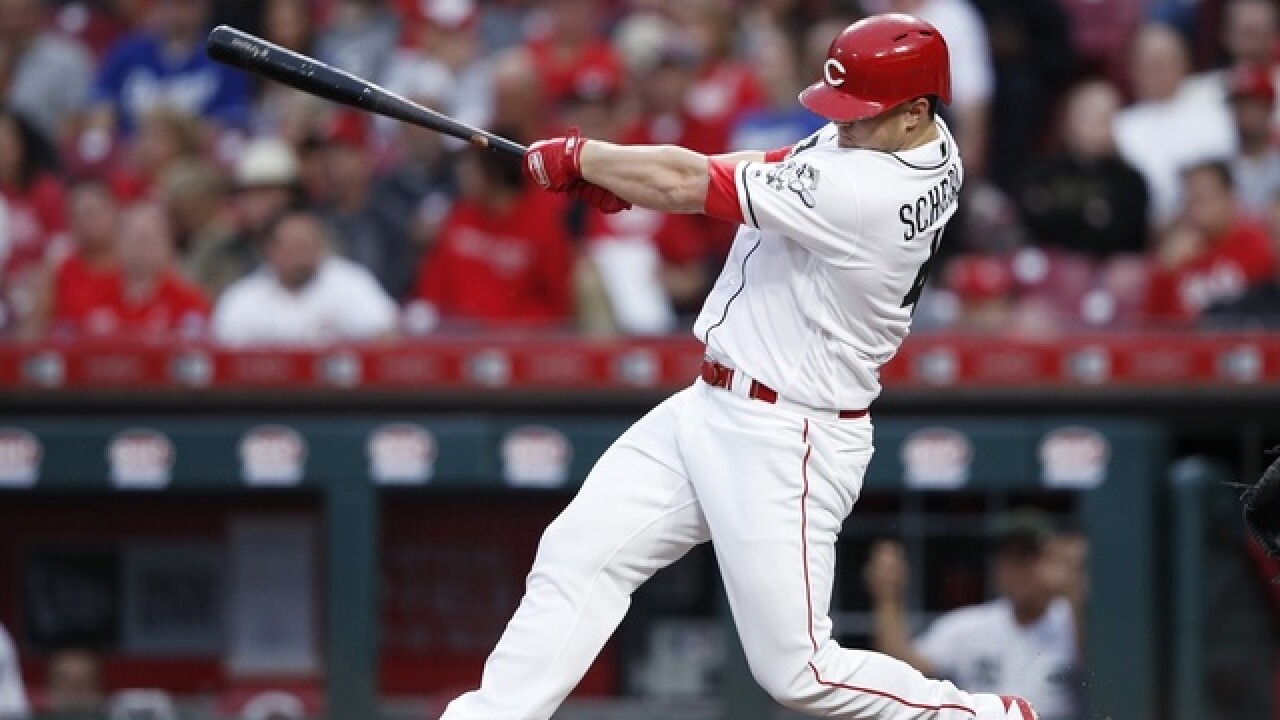 Image copyright 2018 Getty Images. All rights reserved. This material may not be published, broadcast, rewritten, or redistributed.
Joe Robbins
<p>CINCINNATI, OH - SEPTEMBER 11: Scott Schebler #43 of the Cincinnati Reds hits a solo home run in the third inning of the game against the Los Angeles Dodgers at Great American Ball Park on September 11, 2018 in Cincinnati, Ohio. The Reds won 3-1. (Photo by Joe Robbins/Getty Images)</p>

CINCINNATI (AP) -- Not only did Los Angeles lose to the lowly Cincinnati Reds yet again, this time former Dodgers prospects did in their former team.

"Two days ago, things were great," Los Angeles manager Dave Roberts said. "I don't have an answer for the Reds. Obviously, we don't. I wish I had an answer. We felt good about this series coming in. We were prepared. We can't solve the riddle of their pitching. Our only thought now is to salvage the series and find a way to get a win."

Defending NL champion Los Angeles is 0-6 against Cincinnati this season. After losing Monday's series opener 10-6 to the last-place Reds, the Dodgers began the day 1½ games behind NL West-leading Colorado and two games back of St. Louis for the second NL wild card.

Los Angeles has lost back-to-back games for the first time since a three-game sweep by St. Louis from Aug. 20-22. Last week the Dodgers lost two of three to the sub-.500 New York Mets.

"It's not complacency," Roberts said. "If anything, we're trying too hard. When we put it together, we're very good. Against teams that on paper we should beat, it hasn't worked out."

Dixon homered in the second inning and Schebler in the third for a 2-0 lead against Hyun-Jin Ryu (4-3). Jose Peraza, another former Los Angeles prospect, had two hits.

Dixon, Peraza and Schebler all were acquired by the Reds from Los Angeles as part of the December 2015 three-team trade that sent Todd Frazier from Cincinnati to the Chicago White Sox.

"It is fun to play the team you left," Dixon said. "The win is the most important thing, but you have a chip on your shoulder when you play your former team."

Scooter Gennett had two hits, including a run-scoring single in the fifth inning, and lifted his league-leading average to .321. Gennett is hitting .727 (16 for 22) against the Dodgers this season.

Luis Castillo (9-12) allowed one run and four hits in 6 1/3 innings with nine strikeouts. He retired 15 straight batters before Joc Pederson's one-out homer in the sixth.

Raisel Iglesias pitched a hitless ninth for his 26th save in 30 chances, completing a five-hitter.

Dixon, playing in place of a resting Joey Votto, sent a cutter into the upper deck for his fifth home run this season and Schebler hit his 16th home run and third in five games, The drive sailed over the Reds bullpen down the right-field line and clanged off an advertising sign.

In Cincinnati's last four games, Dixon has started at second base, third base, right field and first base. He is the first Reds player to start four straight games at different positions since Jerry Hairston in September 2008. Dixon also has made two scoreless pitching appearances.

Pederson's shot extended the Dodgers' streak of consecutive games with at least one homer to 19, tops in the majors this season. Pederson snapped a 0-for-13 skid with a single leading off the game.

Reds OF Gabriel Guerrero singled in the fourth for his first major league hit.

Dodgers: 3B Justin Turner didn't start after reaching base in 33 of 34 games since coming off the disabled list on Aug. 2 but pinch hit. "He's showing signs of fatigue," manager Dave Roberts said. "He's had a high workload."

Dodgers: RHP Ross Stripling (8-3) starts Wednesday after ace Clayton Kershaw was pushed back to Thursday. Stripling has a 6.14 ERA in 7 1/3 innings in two career appearances against the Reds