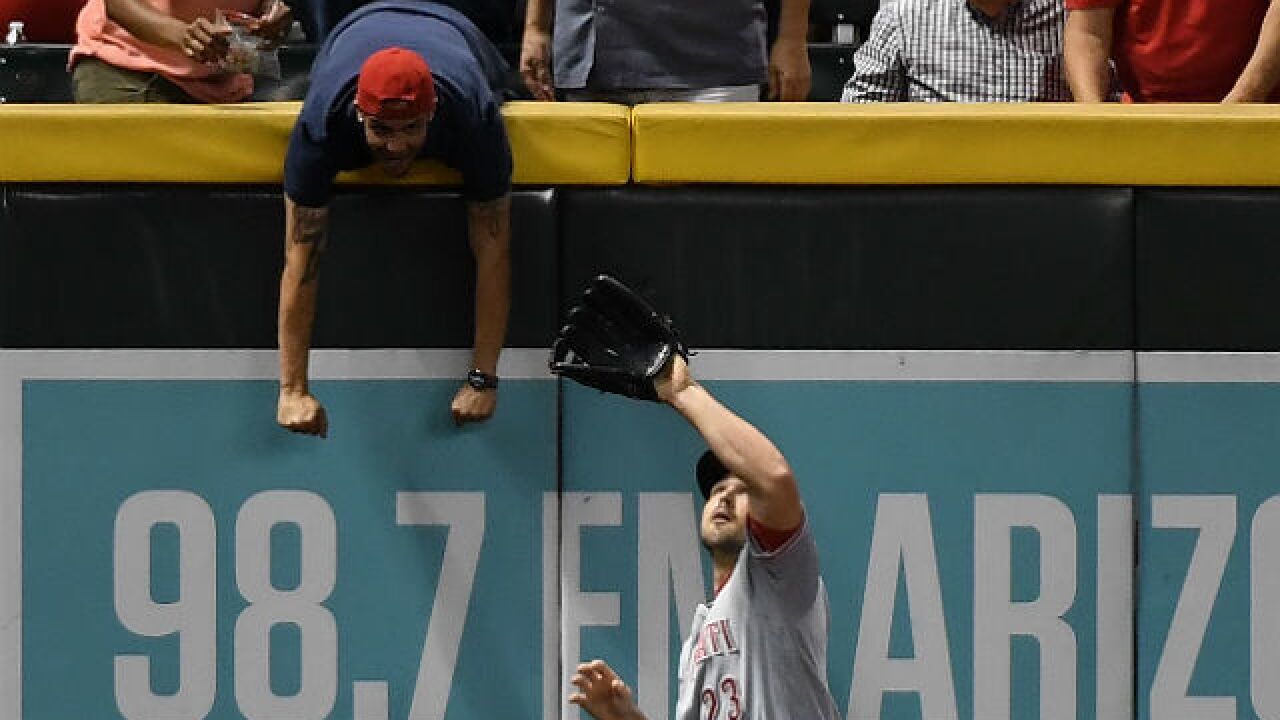 Image copyright 2018 Getty Images. All rights reserved. This material may not be published, broadcast, rewritten, or redistributed.
<p>PHOENIX, AZ - MAY 29: Adam Duvall #23 of the Cincinnati Reds catches a fly ball at the base of the left field wall against the Arizona Diamondbacks during the third inning at Chase Field on May 29, 2018 in Phoenix, Arizona. (Photo by Norm Hall/Getty Images)</p>

PHOENIX, Ariz. - You’re not supposed to lose when the opposing team gets four hits. But tell that to the Reds.

Daniel Descalso’s two-run homer in the first inning put the Reds on their heels and the Arizona Diamondbacks squeezed out a 5-2 victory Tuesday night.

“I was aggressive as I usually am,” Castillo said through a translator. “It was one of the nights that the small details were not there and when I made those mistakes, I got hurt.”

Castillo entered the  game during the first winning streak of his big league career, winning his previous three decisions after holding Pittsburgh to two runs in six innings on Thursday.

The Reds (19-37) had seven hits - Eugenio Suarez homered in the sixth – but they were 1-for 6 with runners in scoring position while taking their 10th loss in the last 15 games.

“(Godley) had nice mix of breaking balls and change ups,” Reds interim manager Jim Riggleman said. “We hit into a couple of double plays. That is baseball.”

Godley worked out of a jam in the first inning when the Reds scored a run. Alex Blandino led off with a double and scored on a Scooter Gennett groundout. But Descalso quickly took back the lead for the D-Backs (28-26).

“Descalso, with the two-run homer, got us playing downhill baseball,” Arizona manager Torey Lovullo said. “We didn’t have a lot of hits, but we had meaningful hits to help us win the game.”

Brad Boxberger worked a perfect ninth for his 13th save in 14 chances.

The Reds recalled RHP Jesus Reyes from Double-A Pensacola and optioned RHP Tanner Rainey to Triple-A Louisville. Rainey appeared in six games this season with an era of 13.50. The 25-year-old Reyes, who has yet to appear in the majors, was 0-8 with a 5.97 ERA with Pensacola.

One of Arizona’s runs in the third inning came when Jarrod Dyson scored from first on Ketel Marte’s double that hit the right field line. Third base coach Tony Perezchica put his hands up to hold Dyson at third, but he blew through the stop sign and scored standing up.

“You don’t realize how much space Jerrod covers in such a short amount of time,” Lovullo said. “Before I knew it, he was by Tony and at home plate. It surprised us all, but he was moving. It’s one of his great gifts."

Reds Austin Brice (back) threw a 25-pitch bullpen session on Tuesday without trouble and RHP Raisel Iglesias (biceps) is scheduled to throw live batting practice on Wednesday. Both are expected to be reinstated from the DL on Wednesday. Lovullo said an X-ray of A.J. Pollock’s broken left thumb showed the bone has not fully healed yet, but added it’s about where he is expected to be in recovery. The outfielder broke his hand on May 14 and was expected to miss 4 to 8 weeks.

Reds RHP Sal Romano has allowed 15 runs in 12 2/3 innings in three starts — all losses — heading into Wednesday’s game against Arizona. Diamondbacks LHP Patrick Corbin is 4-1 with a 2.03 ERA in six home starts this season.