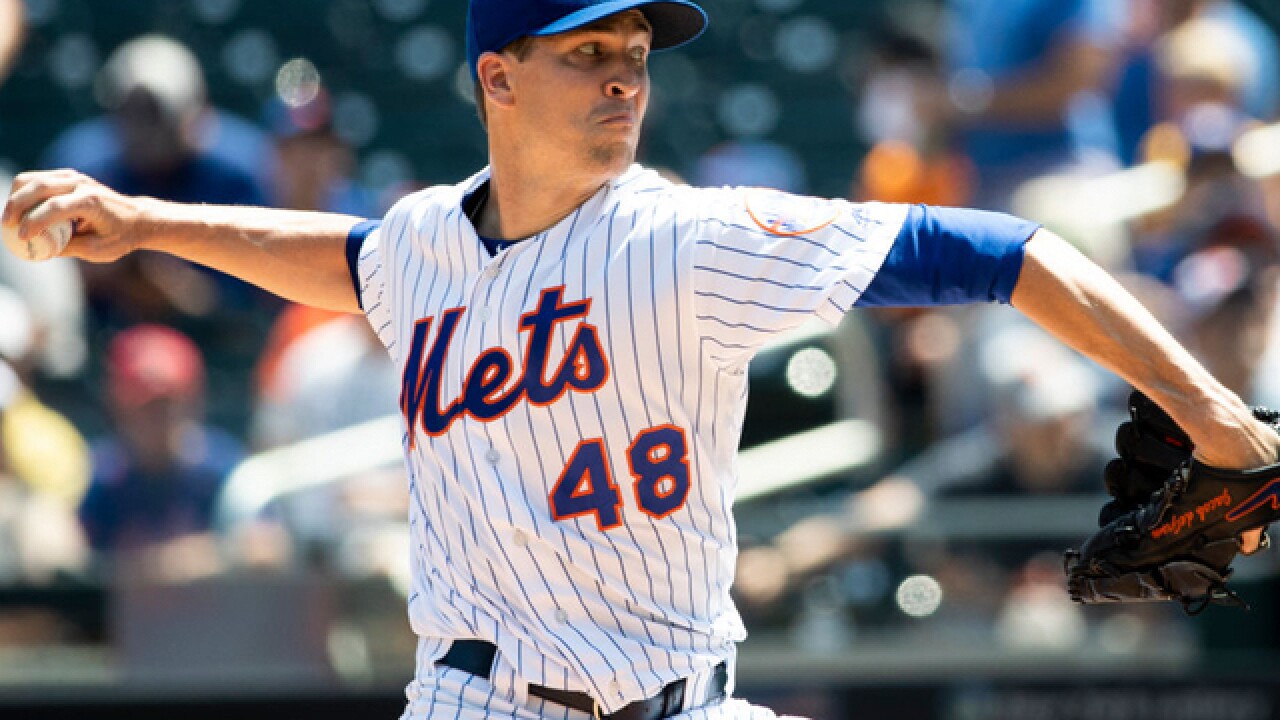 Image copyright 2018 Getty Images. All rights reserved. This material may not be published, broadcast, rewritten, or redistributed.
Michael Owens
<p>NEW YORK, NY - AUGUST 08: Jacob deGrom #48 of the New York Mets pitches during the first inning at Citi Field on August 8, 2018 in the Flushing neighborhood of the Queens borough of New York City. (Photo by Michael Owens/Getty Images)</p>

Brandon Nimmo tied a team record with three doubles and drove in three runs as the Mets won for the 22nd time in their last 66 games.

DeGrom (6-7) ended a seven-start winless streak, allowing four hits in a 100-pitch outing and lowering his major league-leading ERA to 1.77. He won for the first time since June 18 at Colorado, where the Mets scored 12 runs.

It was his sixth double-digit strikeout game of the season of 27th of his career. His first nine strikeouts were on change-ups and fastballs, and deGrom used his curveball to fan Scooter Gennett to end the sixth.

He was 0-5 with a 2.47 ERA during the winless skid, with the Mets giving deGrom a combined eight runs of support in those games.

They scored plenty on Wednesday for deGrom, who helped himself with an RBI walk in the fourth. It was the second straight outing he drove in a run.

Nimmo also added a two-run double in the eighth and Jackson capped the scoring with a single.

Rosario's sacrifice fly came after deGrom drove in his third run of the season and 15th of his career. With runners at second and third, the Reds intentionally walked Devin Mesoraco, but Robert Stephenson (0-1) threw four straight pitches out of the strike zone.

Stephenson made his season debut for the Reds after going 6-0 in his last seven starts for Triple-A Louisville. The former first-round pick allowed three runs on three hits in four innings.

The Reds wound up moving left fielder Phillip Ervin to the mound to finish the eighth.

Seth Lugo, Jerry Blevins and Robert Gsellman each pitched a scoreless inning for the Mets.

1B Joey Votto (right knee) missed his second straight game and sat out for the third time in four games. Votto was hit by a pitch by Washington RHP Ryan Madson and missed his 10th game since the start of the 2015 season. Manager Jim Riggleman said Votto is feeling better and that the slugger will play Friday. . OF Preston Tucker (toe) did not play for the second straight game. He was hit on the right foot by RHP Noah Syndergaard's slider on Monday. Riggleman said Tucker's foot is still sore and he will consult with trainers and undergo tests during Thursday's off day.

After a day off, RHP Anthony DeScalfani (6-5, 4.98 ERA) will start the opener of a three-game series against Arizona on Friday.