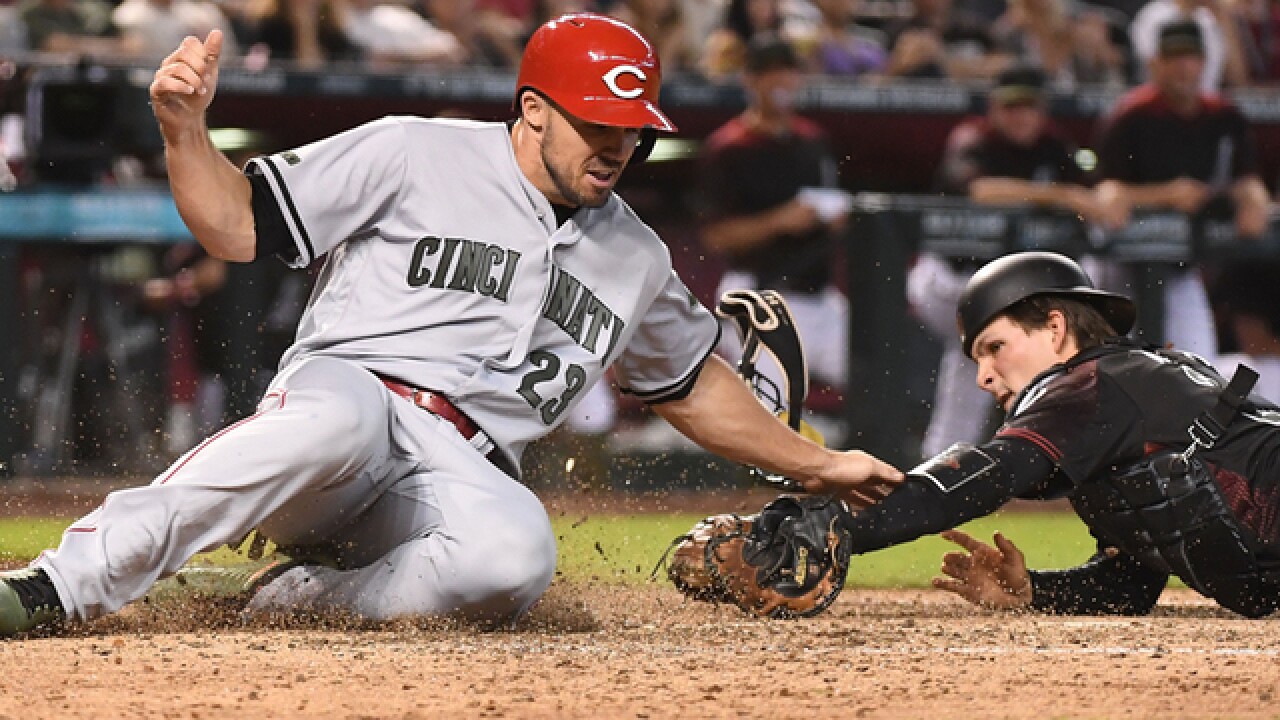 Image copyright 2018 Getty Images. All rights reserved. This material may not be published, broadcast, rewritten, or redistributed.
Jennifer Stewart
<p>PHOENIX, AZ - MAY 28: John Ryan Murphy #36 of the Arizona Diamondbacks tags out Adam Duvall #23 of the Cincinnati Reds at home plate in the fifth inning of the MLB game at Chase Field on May 28, 2018 in Phoenix, Arizona. MLB players across the league are wearing special uniforms to commemorate Memorial Day. (Photo by Jennifer Stewart/Getty Images)</p>

PHOENIX (AP) — Nick Ahmed, Chris Owings and John Ryan Murphy each homered as Arizona's offense — slumbering for nearly all of May — came alive for a 12-5 victory over the Cincinnati Reds on Monday, just the Diamondbacks' third win in their last 18 games.

Ahmed and Owings each had a three-run home run in the opener of a six-game homestand after Arizona staggered back from a 1-8 road trip. Murphy added a solo shot.

Ahmed and Murphy homered off Homer Bailey (1-7), who allowed eight runs, six earned, on six hits in four innings. The Reds are 1-11 in games Bailey has started.

Matt Koch (3-3) went five innings, giving up five runs on 11 hits for Arizona. Eugenio Suarez had four hits for the Reds, including an RBI double.

The Diamondbacks, in their highest-scoring game of the season, were aided by three Cincinnati errors.

The biggest was a miscue by shortstop Jose Peraza on a made-to-order inning-ending double play. That cleared the way for Arizona's four-run second inning.

Daniel Descalso led off the second with a triple to the right field gap before Murphy bounced out to third. Owings walked and Socrates Brito bounced one to Peraza, who was standing a couple of steps from second base. But the ball glanced off the glove and then the side of Peraza's head, allowing Descalso to score and tie it 1-1.The next batter, Ahmed, homered on an 0-2 pitch into the left field seats to make it 4-1.

The four runs were the most in an inning for the Diamondbacks since they got five in the third against the Phillies on April 26.

Murphy's leadoff homer made it 5-1 in the fourth, and Owings reached on third baseman Suarez's fielding error. Brito singled and Ahmed hit a hard grounder to third. Suarez threw to second for the force as Owings raced for home and scored ahead second baseman Scooter Gennett's errant throw.

Cincinnati rallied to make it 6-5 with three runs in the fifth. Adam Duvall's three-run double cut the lead to 6-5. The Reds sent the tying run home from second when Bailey grounded the ball off the third-baseman's glove into short left field, but shortstop Ahmed threw Duvall out at the plate to end inning.

Owings had four hits in his previous 50 at-bats when he went deep off reliever Jackson Stephens in the fifth to boost the lead to 9-5.