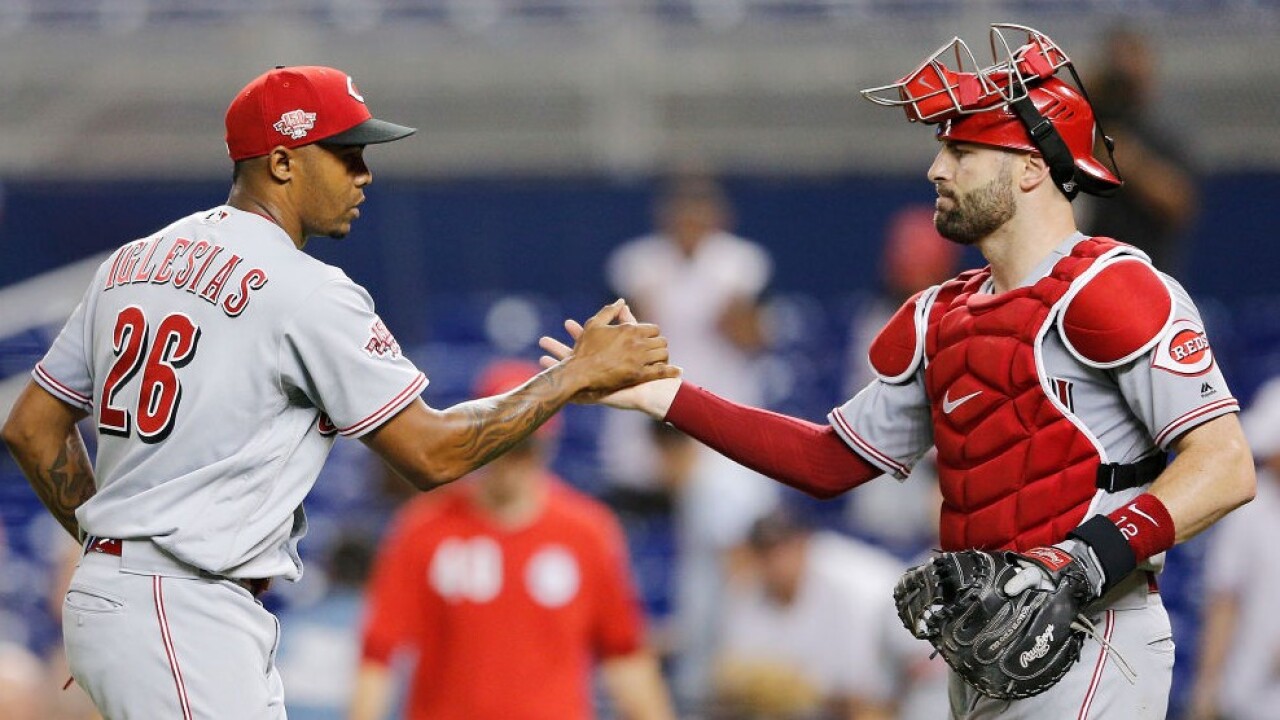 MIAMI — Curt Casali found his swing in no time at all.

In his second game since returning from the injured list, Casali hit a tying solo drive off Caleb Smith (8-8) in the fourth inning. He batted again in the fifth and hit a two-run single off Tyler Kinley, giving the Reds a 5-3 lead.

The 30-year-old Casali had been sidelined by a sprained right knee.

"I felt good at the plate immediately and that was awesome," he said. "Usually it takes me the longest to get my timing."

Cincinnati also got a big game from Eugenio Suárez, who went deep for the third straight day and finished with three hits. Suárez leads the team with 37 homers.

The Reds have won the first two games in the four-game set after they were swept at Pittsburgh over the weekend.

Cincinnati opened a 7-3 lead on Nick Senzel's two-run homer in the sixth. After Jorge Alfaro got two back with his 14th homer in the bottom half, Senzel added an RBI single in the seventh.

Castillo remained unbeaten against the organization that traded him before the 2017 season. Castillo (13-5) allowed five runs and seven hits, struck out 11 and walked two in six innings. The right-hander also went 2 for 3 at the plate while improving to 3-0 against Miami.

Raisel Iglesias got four outs for his 27th save.

The Reds got off to a solid start behind Suárez, who hit a two-run shot in the first. It was Suárez's 13th first-inning homer of the year, breaking the Reds' record of 12 by George Foster in 1977.

"I didn't even know about that," Suárez said of the record.

The Marlins tied it in the bottom of the inning on Isan Díaz's two-run double to right-center. Díaz was thrown out at third as he tried for a triple.

Alfaro homered for the third straight game for last-place Miami, which has dropped three of four.

"Just not throwing strikes, getting behind in counts, and having to put it over the heart of the plate and they were doing damage," Smith said.

Castillo said he doesn't have any extra motivation when he faces Miami.

"Any time you step on the mound you have to do your job," Castillo said in Spanish. "But I don't have any animosity or bad feelings because it is a team that treated me well. I have always loved that team and I will never have any bitter feelings toward them."

The Reds optioned infielder Jose Peraza to Triple-A Louisville to make room for Joey Votto, who returned from the injured list and went 0 for 5
.
Peraza has received limited playing time because of Freddy Galvis' production since he joined the club Aug. 13.

The Reds reduced their pregame drills, bypassing on-field batting practice, and didn't arrive at their clubhouse until two hours before the game. With his team in the midst of an 11-game trip, manager David Bell considered it an appropriate time to scale back.

Marlins: INF/OF Brian Anderson will not need surgery to repair the finger he broke against Philadelphia last week, but he is still expected to miss the remainder of the season. ... RHP Austin Brice (forearm strain) was placed on the 10-day injured list.

Reds: RHP Anthony DeSclafani (8-7, 4.27 ERA) began his major league career with the Marlins in 2014 before his trade to Cincinnati prior to the 2015 season.