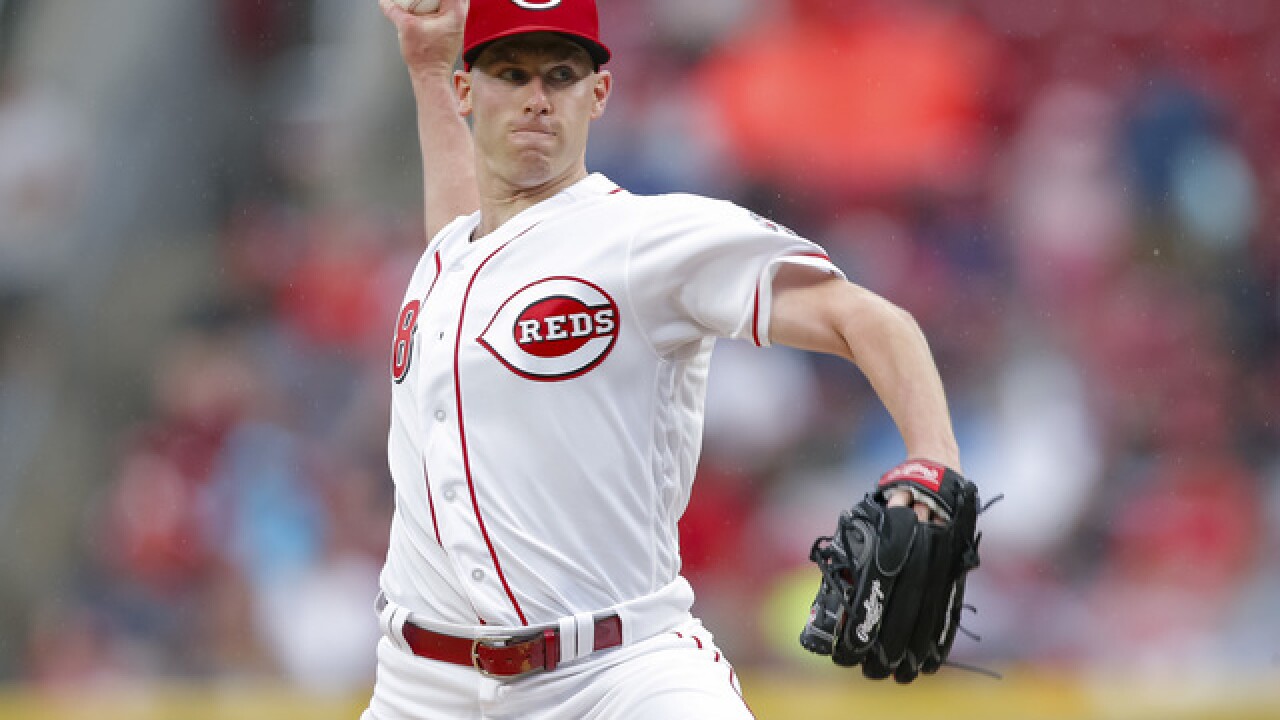 Image copyright 2018 Getty Images. All rights reserved. This material may not be published, broadcast, rewritten, or redistributed.
Michael Hickey
<p>CINCINNATI, OH - JULY 21: Anthony DeSclafani #28 of the Cincinnati Reds pitches during the first inning against the Pittsburgh Pirates at Great American Ball Park on July 21, 2018 in Cincinnati, Ohio. (Photo by Michael Hickey/Getty Images)</p>

CINCINNATI — Corey Dickerson led off the game by plunking the top of Reds pitcher Anthony DeSclafani’s left foot with a sharp grounder.

Then the Pittsburgh left fielder really did some damage.

DeSclafani (4-3) was able to shake off Dickerson’s sharp one-hopper to last 4 1/3 innings, but he took his second straight loss, giving up six hits and three runs with two walks and six strikeouts.

“Dickerson smoked that ball in the first inning,” DeSclafani said. “It hit me on the top of the foot just below the ankle. The x-rays were negative. I just have a contusion. It will feel better in a couple days.”

Dickerson homered on the first pitches he saw from DeSclafani in the third and fifth innings for his seventh career multihomer game, helping the Pirates to their longest winning streak since an eight-game stretch Sept. 19-26, 2015. They are over .500 for the first time since they were 31-30 on June 6.

“I try to have a plan,” Dickerson said about the aggressive approach that led him reaching 100 career home runs. “They know my weaknesses. What I try to do is stay on pitches. It’s really more about timing.”

“We’ve been talking since spring training about being ready to hit when you step into the box,” Pittsburgh manager Clint Hurdle. “Early in the count, guys are ready to hit.”

Josh Bell added four hits, including a run-scoring double in the fourth, to help send the Reds to their third straight loss, their longest slump since a four-game losing streak June 2-6.

The game was delayed 47 minutes by rain in the middle of the fourth inning, one night after the start was held up 2 hours, 55 minutes.

Kingham (5-4) allowed just one runner past second base before Curt Casali knocked him out of the game with a two-run homer that just barely reached the left field seats in the seventh. Pitching in rain, he walked the first two batters before getting All-Star Joey Votto to hit into a double play.

“There were a lot of different things,” Kingham said about his slow start. “The ball was slipping. My release point was off. Nothing was going right. Walking two and facing Votto is not how your draw it up.”

Kingham  earned his third win in his last three starts, limiting the Reds to four hits and two runs with three strikeouts and two walks in 6 1/3 innings. He also grounded a two-run single up the middle through a drawn-in infield in the sixth.

Starling Marte’s first-inning single extended his hitting streak to a career-high 14 games, the majors’ longest active streak and the longest by a Pirate since Andrew McCutchen hit in 18 straight in 2015.

Jesse Winker singled in the fourth to extend his career-high hitting streak to 12 games, the longest by a rookie in the majors this season.

Due to a pregame technical issue with the replay system, each club was afforded its normal manager’s challenge, but crew chief reviews were unlimited for the remainder of the game.

WELCOME TO THE CLUB

Pirates: C Francisco Cervelli was eligible to be activated from the seven-day concussion disabled list on Saturday, but Hurdle said Cervelli had not resumed baseball activities.

Pirates: RHP Ivan Nova (5-6) is 3-1 with a 3.51 ERA in seven starts since being reinstated from the disabled list on June 10. He’d been out with a sprained right ring finger.

Reds: Matt Harvey (5-5) is 4-0 over his last five starts. He hasn’t allowed more than two earned runs in any of those appearances.