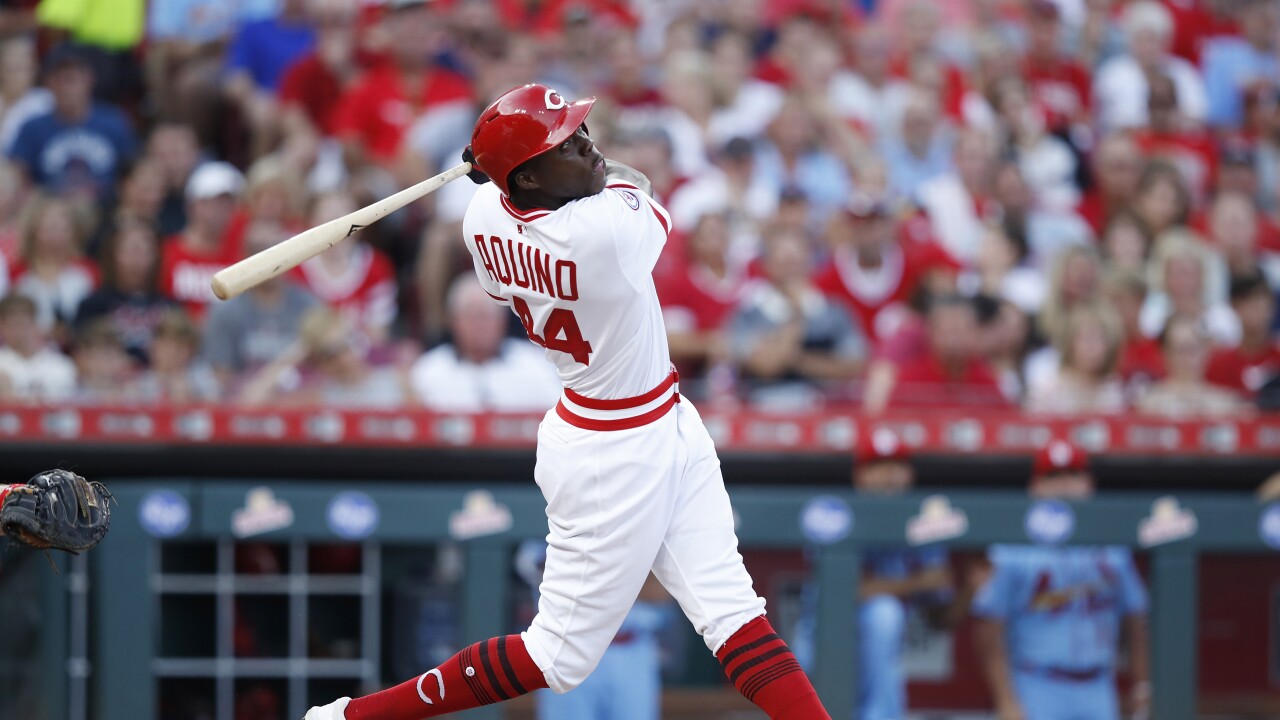 CINCINNATI — When Aristides Aquino rounded the bases following each of his historic home runs, he didn’t allow himself to consider the magnitude of his achievement. That humility is something he was taught at a young age by his parents.

At 25 years old, Aquino still doesn’t feel that far removed from the days when he played baseball from dawn to dusk on dirt fields in his native Dominican Republic, using rolled-up socks for a ball and tree limbs as a bat.

“The tradition in the Dominican is if you’re a boy, you have to play baseball, so that’s what I did,” Aquino said, via a translator. “You played every day. If you were not on the baseball field playing, you were in the backyard. I played all day with my cousins.”

Aquino started playing baseball when he was 6 years old. He played for his uncle’s team, Los Amiguitos, or “The Little Friends.” He idolized legends Pedro Guerrero and Roberto Clemente. But neither Guerrero or Clemente accomplished what Aquino has, hitting 11 home runs in his first 18 career games. No player before him has done that.

But when he gets home from the ballpark, Aquino doesn’t watch his highlights or read his accolades. The Reds outfielder who became the first major league rookie and first Reds player to homer in three consecutive innings on Aug. 10, spends his free time talking to his family back home, listening to music or watching television.

His music library spans most genres. His TV preferences range from “Prison Break” to “Dexter” to “Money Heist." He isn’t a huge fan of American food.

At 6-foot-4 and 220 pounds, Aquino is an imposing figure. But he speaks softly and shyly, with an infectious smile, while alternating between Spanish and English, which he is learning with an assist from Frank Sinatra. His walk-up song is Sinatra’s classic “Fly Me to the Moon,” which is no coincidence.

“I love Frank Sinatra and the way he (sings) slowly, his phrasing,” Aquino said. “It helps me learn English.”

To date, Aquino’s bat has done most of his talking.

He entered the week three home runs shy of tying the club record for homers in a calendar month, held by Frank Robinson, who hit 14 in August 1962, and Greg Vaughn, who belted 14 in September 1999. Through his first 18 games, Aquino was leading the majors in home runs, runs batted in and slugging percentage. He already has won a National League player of the week award and is a candidate for the monthly honor in August.

“I’m just really happy,” Aquino said. “When I’m rounding the bases, ‘I think ‘I did it, I did it.’ But I’ve been really humble since I was a kid. I think that’s the values that my family taught me. I’m really proud that I’m this kind of person.”

Baseball can be a cruel game. While Aquino’s magical start is etched in the history books, his career is in its infancy. Whatever the future holds for Aquino from here, those around him are confident he’ll continue to adjust at the plate and improve in all facets of his game.

“For a young player, his personality, his whole makeup and demeanor, you couldn’t ask for more,” said Reds manager David Bell. “To see how humble and hard-working and mature he is, for a first-year player. Even if he’s not hitting home runs at this crazy pace, you feel like he’s going to keep progressing and keep going.”

Fans and media have likened Aquino to Reds Hall of Fame outfielder Eric Davis. Aquino is taller and more muscular than Davis, but his unique open batting stance and whip-like swing are eerily similar. Oh, and Aquino wears No. 44, which was Davis’ number.

Aquino has heard the comparisons to Davis and, to no one’s surprise, is humbled by them.

“He was a legend,” Aquino said. “He could do everything: hit, run, throw. It’s really nice when people are comparing me to him. To be honest, I’ve been hitting like that because I wanted to do it. Not because I want to mimic Eric. I’m not trying to copy him.”

Only Hall of Famer Mike Schmidt reached 11 homers faster than Aquino has in a single season. In 1976, Schmidt reached that total in 56 plate appearances. It took Aquino 58. Yet he strolls around the bases and walks into the dugout like he has done it all many times before.

After each monster home run, what Aquino looks forward to most are the phone calls home to Santo Domingo, where it doesn’t take long for news of any local players’ success to reach the baseball-crazed Dominican Republic.

“They’re really happy and really proud of me,” Aquino said of his family. “They knew what I was capable of doing here. They feel really happy for me because they knew I was ready to do what I’m doing right now.”

Aquino was rated among the top 20 prospects in the Reds organization by Baseball America coming into this season. But no one envisioned what has transpired over the past couple of weeks.

Aquino had more than 2,800 plate appearances in the minor leagues before making his debut for the Reds last season, then had another 323 this year before being called up on Aug. 1. At Double-A Pensacola, he batted just .216 in 2017 and .240 last year.

But Aquino was confident in his ability, and so were the Reds. He made some adjustments to his swing and was confident he'd get another opportunity in the major leagues. But it is not something that he will ever take for granted.

“That’s why I pray every day,” Aquino says. “I work very hard so the things that I’m achieving today happen, often.”