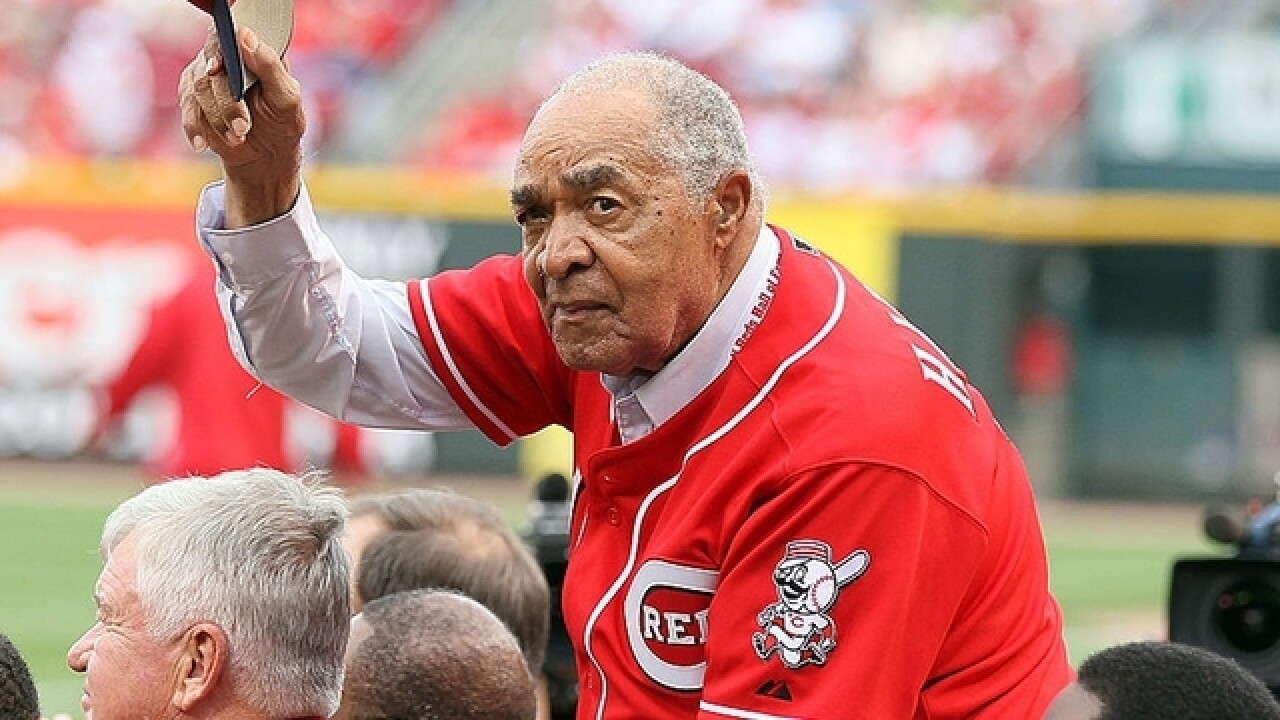 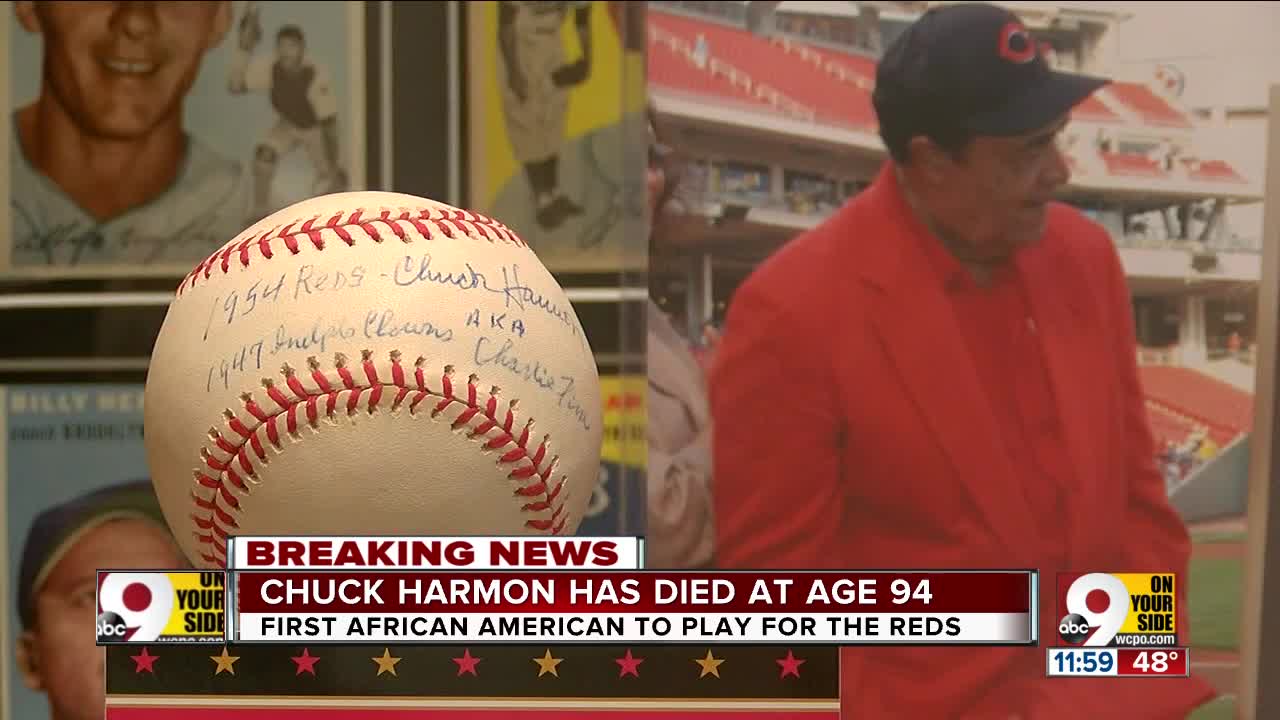 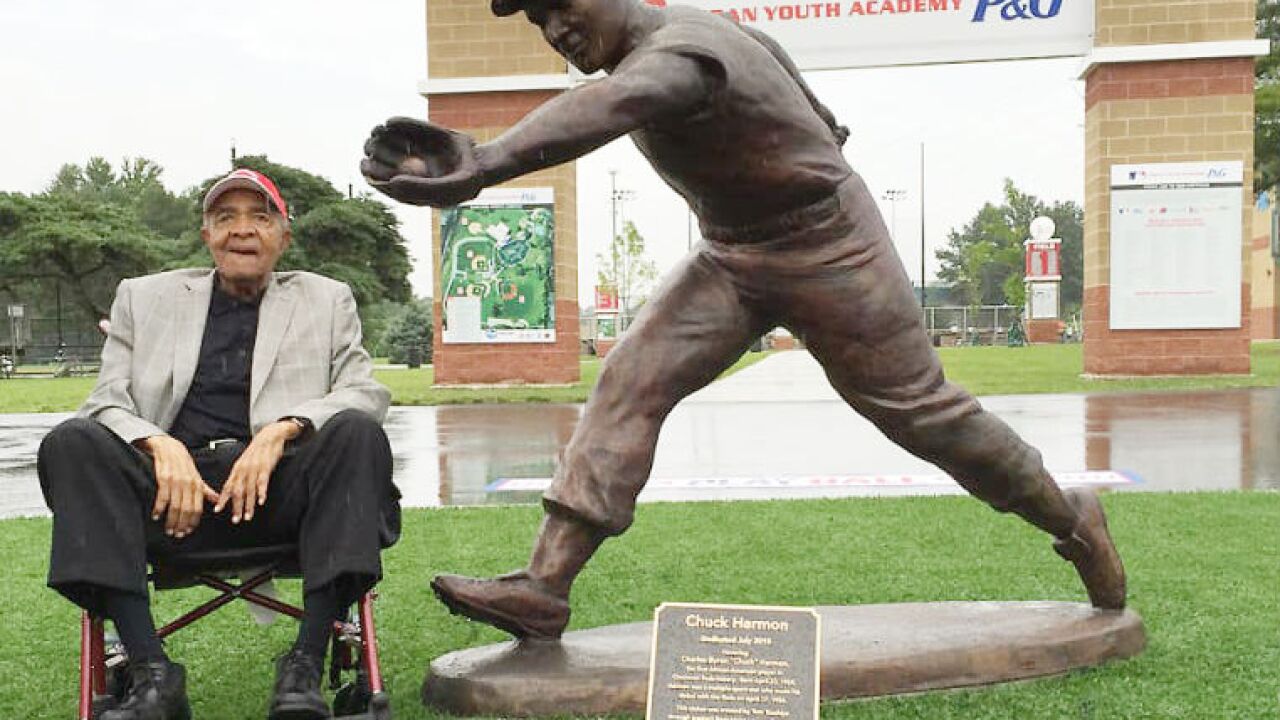 CINCINNATI — Chuck Harmon not only blazed a trail as the first African-American Reds player, he did it with dignity and grace and earned the highest admiration in the ranks of pro baseball's first and oldest franchise.

"The entire Reds family is saddened to lose one of its great ambassadors. The first African American to play for the Reds, Chuck Harmon was much more than a ballplayer. He represents a pivot point in Reds history," Reds Chief Executive Officer Bob Castellini said of Harmon's death this week.

"Chuck’s positive attitude and disposition helped diffuse the adversity he faced, and set the tone for those following in his footsteps. He was beloved by his teammates during his career and remained a treasure to this franchise and its fans throughout his life. He will be missed.”

The 94-year-old Harmon was at home in Golf Manor when he passed away about 6 a.m. Tuesday, according to his son, Chuck Harmon Jr. The younger Harmon said his dad is in a better place with his mom, who died 10 years ago.

It was April 17, 1954 when Harmon made his Reds debut as a pinch-hitter in a game in Milwaukee - seven years after Jackie Robinson broke baseball's color barrier with the Dodgers. Harmon played only 2 1/2 seasons with the Reds and had modest stats, but he became a legend for other reasons.

Segregation was still a factor when Harmon played in the majors. He had to stay in a separate hotel or private home while on the road with the team. Some Cincinnati fans were not accepting of black players, either, and made it known at Crosley Field. But Harmon told WCPO in 2017 that he was still glad he was the first.

"Somebody says, 'Ah, that guy can do this.' If he can do this, making everybody happy — I want to do that," Harmon said then.

"There was name-calling and things of that nature, but my dad always brushed it off," Harmon's son said at that time. "He was about playing baseball for the Cincinnati Reds, doing something that he loved to do, and that was the main thing - and trying to make fans happy."

Harmon was not the first Reds black player, according to the Society for American Baseball Research (SABR). Batting just before Harmon when he made his Reds debut was Nino Escalera, a Puerto Rican of African descent. Asked who deserved credit for being the Reds' first player of color, Harmon said, “I was the first African-American; Nino was the first black. I don’t know what difference it makes. But for history’s sake, they might as well get it right.”

A utility player, Harmon played mostly at third base, outfield and first base in a four-year major league career. He played 203 games for the Reds and batted .244. He was traded to the Cardinals in May 1956 and then to the Phillies the next year. Over his 289 major-league games, he batted .238 with seven homers, 59 RBIs and 25 stolen bases.

One of the highlights of Harmon's career was breaking up a no-hitter in the ninth inning against the Giants on July 23, 1955, at the Polo Grounds. But after Harmon hit a one-out single off Giants pitcher Jim Hearn, Harmon received a death threat in a letter from a New York fan, indicative of the issues players of color faced, according to J.P. Garrett, writing for SABR.

“If you worried about how you were being treated or going to be treated, you don’t need to be there,” Harmon said. “You have to play the game and do all the little extra things. You don’t have time to wonder if someone will look at you cross-eyed or say something to you. It was enough to worry about that baseball coming at you, or someone sliding into you. There were too many other things to worry about.”

After his playing days, Harmon scouted for the Braves and Indians and made his home in Cincinnati, where he took on unofficial roles for the Reds while working in sales for the MacGregor Sporting Goods Company and as an administrative assistant at Ohio's First District Court of Appeals.

Harmon took Hall of Famer Frank Robinson "under his wing" when the rookie joined the team in 1956 and helped him adjust to playing major league baseball in Cincinnati in the 50s and 60s, former Reds manager Dusty Baker told MLB.com.

Over the years, Harmon was a fixture at Reds games, mixing with fans and rooting for the home team. He attended Redsfest and other special occasions for the club, and the Reds honored him appropriately.

In 2014, Harmon received the Powell Crosley Jr. Award from the Reds Hall of Fame and Museum for his dedication and devotion to the Reds. In 2015, the Reds unveiled a statue of Harmon in front of the Reds Youth Academy in Roselawn. A street in Golf Manor is named Chuck Harmon Way.

Harmon and his wife, Daurel, were married for 62 years until she passed away in 2009. The couple had three children.

Harmon, born April 23, 1924 in Washington, Indiana, had been a successful basketball player, playing on back-to-back Indiana state high school championship teams for his hometown school, Washington High, in 1941-42. He went on to captain the University of Toledo basketball team and even had a tryout with Boston Celtics several years later.

Harmon took a long and winding road to a pro baseball career, brushing elbows with Henry Aaron, Larry Doby and Goose Tatum along the way, according to Garrett.

By the end of his freshman year at Toledo, Harmon left school to serve in the Navy during World War II. He was assigned to the Great Lakes Naval Station near Chicago and joined the black baseball team. He roomed with Doby, who would later be the first African-American to play in the American League, signing with the Indians in 1947.

As Garrett continued the story:

Harmon spent his three-year hitch stateside and returned to Toledo to play basketball and baseball. In the summer of 1947, Harmon needed money to meet college and living expenses, but he also wanted to maintain his NCAA eligibility, so he signed with a Negro Leagues team, the Indianapolis Clowns, to play under the name “Charlie Fine.” Harmon had grown up watching the Clowns and idolized the team.

“Four games, four days on a bus,” Harmon said about his short stint in the Negro Leagues. “Goose [Tatum, who played with the Harlem Globetrotters] took me under his wing. He liked me because he knew I played basketball. Goose is the one who gave me the (alias) Charlie Fine. That’s the name I played under. Goose didn’t want my college eligibility to be affected.”

Once the Dodgers put Robinson in the lineup, some other teams hurried to sign black players. Before the month was out, Harmon was signed to a minor-league contract by the St. Louis Browns (today’s Baltimore Orioles). He started with the Browns’ Gloversville-Johnstown team in upstate New York. That’s where he met Daurel Pearl Woodley, a student at nearby Syracuse University. They married four months later.

After the baseball season, Harmon returned to school and picked up where he left off on the basketball team as the second-leading scorer in the 1947-48 and 1948-49 seasons.

Harmon continued to play minor-league baseball and hit .300 or better for five consecutive seasons. Frustrated at being stuck in the low minors, he decided to try pro basketball and was one of the final players cut by new coach Red Auerbach from the 1951 Celtics.

The Reds picked up Harmon’s contract in 1952 and he spent two more years in the minors, finally having a breakthrough season in 1953 with the AA Tulsa Oilers. Harmon batted .311 with 83 RBIs, 14 home runs, and 25 stolen bases in 143 games.

After that, the Reds sent Harmon to Puerto Rico for winter ball, where Harmon was second in the league in hitting, ahead of Aaron, and earned an invitation to spring training in 1954.

Harmon made the team – and Reds history – in the third game of the season. Manager Birdie Tebbetts sent him in to bat for pitcher Corky Valentine in the seventh inning. Harmon popped out.

“It was another day at the beach, I guess,” Harmon said. “People ask me the same old thing, ‘Did you think you would make history?’ I tell them when you’re born, you’re history. You don’t realize when you’re actually making history.”