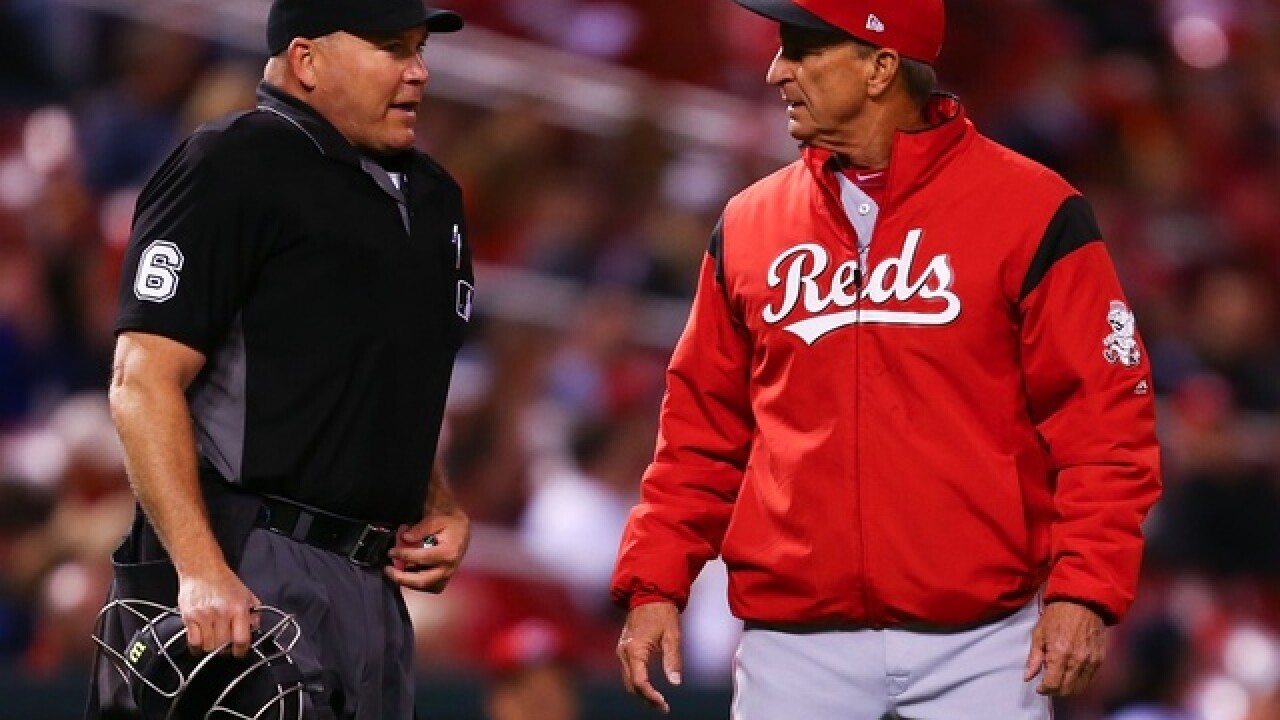 Copyright 2018 Scripps Media, Inc. All rights reserved. This material may not be published, broadcast, rewritten, or redistributed.
Dilip Vishwanat
<p>ST. LOUIS, MO - APRIL 20: Interim manager Jim Riggleman #35 of the Cincinnati Reds discusses a call on the field with umpire Mark Carlson #6 during a game against the St. Louis Cardinals in the eighth inning at Busch Stadium on April 20, 2018 in St. Louis, Missouri. (Photo by Dilip Vishwanat/Getty Images)</p>

Riggleman replaced Bryan Price, who was fired Thursday after Cincinnati lost 15 of its first 18 games.

Jose Martinez had three hits and an RBI, raising his batting average to .358 this season. He has eight RBIs over his last seven games. Tommy Pham scored twice.

Bud Norris picked up his fifth save in five chances despite allowing a two-out RBI single to Alex Blandino, helping the Cardinals won for the sixth time in seven games.

Brandon Finnegan (0-2) lost for the second time in two starts against the Cardinals this year. Finnegan came off the disabled list (left biceps strain) April 14th. He allowed five hits and four runs while walking four over three innings.

Pham, who scored on Molina's bases-loaded double in the first, walked in the second and scored on Martinez's double to make it 4-0.

Tommy Pham scored for the second time in two innings. Following a walk, he scored on a two-out double by Jose Martinez to pad the Cardinals early lead to 4-0.

The Reds' only damage against Wacha came in the third as Billy Hamilton scored on Jose Peraza's sacrifice fly. It was Cincinnati's first run since the eighth inning against Milwaukee on Monday, ending a 21-inning scoreless streak. Last season the Reds season-high scoreless streak was 20 innings.

The Reds appointment of Riggleman as interim manager marks the fourth time in his career that he has held this position. He previously was named interim manager in San Diego, Seattle and Washington. He was promoted to manager everywhere but Seattle. Riggleman also managed the Chicago Cubs (1995-1998) and managed in the Cardinals' minor league system (1982-'88).

Reds: OF Scott Schebler was activated from the 10-day disabled list and LHP Cody Reed (0-0, four appearances) was optioned to Triple-A Louisville. Schebler was on the DL with a right ulnar nerve contusion.

Cardinals: RHP Sam Tuivailala threw a bullpen session Friday and St. Louis president of baseball operations John Mozeliak said Tuivailala will begin an official rehabilitation assignment the middle of next week. Tuivailala was placed on the DL with a left knee strain.

Reds RHP Homer Bailey (0-3, 3.42) will face Cardinals RHP Carlos Martinez (2-1, 1.75) in the second of a three-game series on Saturday. Martinez is 7-3 in his career against Cincinnati and the Cardinals have won seven of his last nine starts against the Reds, including last Sunday's 3-2 win in Cincinnati. Bailey is still looking for his first win in five starts. He is 6-14 in his career against St. Louis.