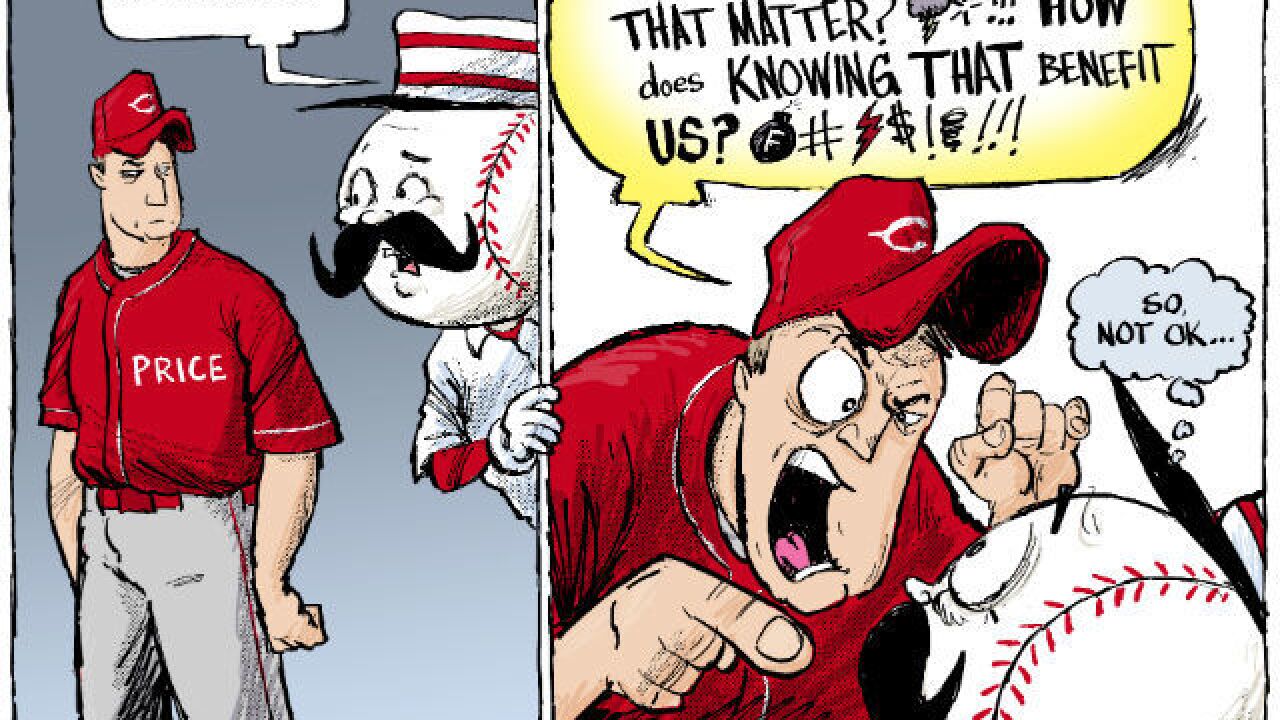 What they will remember is "The Interview.”

Price guaranteed that a whole generation of baseball fans across the country would remember him for that.

Price set a modern-day baseball record (we think) by unloading 77 mentions of the f-word and variations of 10 other vulgarities during a manager’s office interview in Milwaukee on April 10, 2015. Price went on his expletive-filled rant against the media, saying it shouldn’t report developments he felt would put his team at a competitive disadvantage. Price was particularly upset with a Cincinnati Enquirer beat writer who reported that catcher Devin Mesoraco was not available for the previous day’s game.

Read a censored version of Price's tirade here. Hear it below:

Ah, f___. I’m just, I’m f___ing p___ing up a rope in this f___ing business. Because everyone has to know everything all the f___ing time. That’s not my f___ing obligation, it’s not their obligation. You know why f___ing Billy Hamilton didn’t f___ing play? The other day? Because his f___ing finger’s hurt and he couldn’t hit right-handed comfortably. Right? So that’s something that I need to know and no one else needs to know. No one else needs to f___ing know it, and all of a sudden it’s out there. His f___ing fingers are sore. It doesn’t benefit us. It wasn’t from you, but it doesn’t benefit us one bit to f___ing announce to the f___ing other teams that we’re playing to bring in lefties when they need to f___ing get Billy out. There’s no benefit. So, I’m f___ing, to be honest with you, I’m f___ing sick of this s___. I’m sick of listening to this f___ing s___, I’m sick of f___ing the f___ing second-guessing bulls___, you guys can do whatever the f___ you want, but I’ll tell you this — I’m not going to f___ing tell you everything about this f___ing club, because you f___ing guys are going to out there and sniff it out anyway. I don’t f___ing like it one f___ing bit. I bend over backwards to be honest and direct with you f___ing guys and you stick it right up my f___ing a__ — and the f___ing team’s a__. And I’m sick of it. What do you got? If you don’t got anything, get out and I’ll do this f___ing interview with Marty. You don’t have anything? Just get out, please.

Price apologized to reporters the next day, saying he used "a lot of bad language that I feel bad for in the aftermath. And I apologize for that." He added that "the content between the profanity is exactly how I felt, and I won't apologize for that under any circumstances."

Price complained again that media reports on the Reds were giving opponents an advantage.

"I don't understand what the importance is for everybody to know if we have a player that's not here," Price said. "We don't benefit from the other teams knowing we don't have a player. It does - you don't have to be a Reds fan, but it doesn't help us if our opponents know who is here and who isn't. That's what I want to know."

Price’s rant inspired its own hashtag on Twitter, #77fbombs.

Here's part of Price's tirade with F-bombs beeped out.