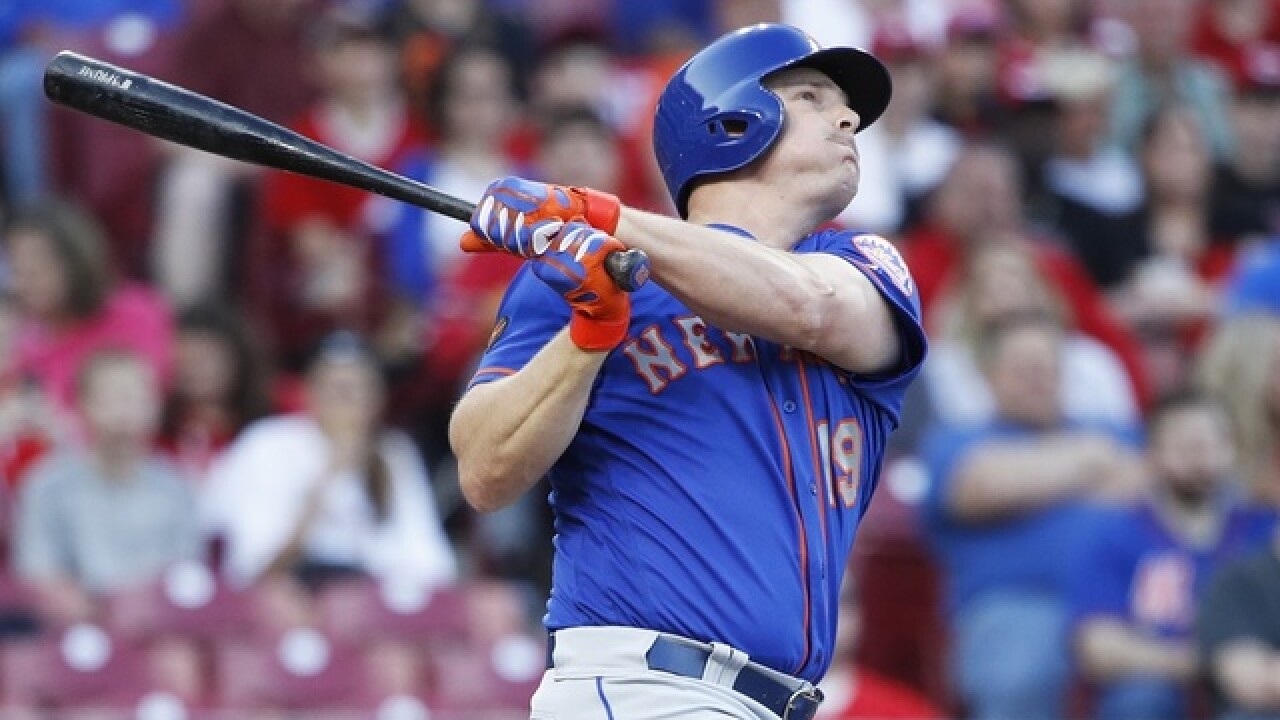 Copyright 2018 Scripps Media, Inc. All rights reserved. This material may not be published, broadcast, rewritten, or redistributed.
Joe Robbins
<p>CINCINNATI, OH - MAY 07: Jay Bruce #19 of the New York Mets hits a two-run home run in the third inning against the Cincinnati Reds at Great American Ball Park on May 7, 2018 in Cincinnati, Ohio. (Photo by Joe Robbins/Getty Images)</p>

CINCINNATI — Jay Bruce started circling the bases and heard the roughly 15,000 fans chant his name again in that familiar way. Yes, “BRUUUUUUCE” was back, and so was the Mets’ struggling offense.

Bruce hit a two-run homer in the ballpark that’s the scene of his best moment in baseball, and Adrian Gonzalez connected twice, powering the Mets to a slump-ending 7-6 victory over the Cincinnati Reds.

It was a nostalgic moment for Bruce, who was traded in 2016. He considers his top moment in sports the walk-off homer he hit at Great American Ball Park in 2010 to clinch a division title. Reds fans chanted his name in unison as he circled the bases for the 136th time there, trailing only Joey Votto (144) for the ballpark record.

“Obviously every Reds fan wants the Reds to win, but we went through a lot together,” Bruce said. “We had a lot of time together here and a lot of experiences.”

The Reds honored Mets third baseman Todd Frazier pregame on his return to GABP, where he won the All-Star Home Run Derby in 2015 before being traded. It was his first time back since the trade.

"Me and Jay, for the last couple of months, have talked about it a lot," Frazier said. "This is where we started."

Reds starter Homer Bailey (0-5) lasted only four innings and gave up eight hits and six runs. The Reds have lost all eight of his starts. He's still trying to recover from a series of elbow operations in recent years.

"I just didn't have my command, which hasn't been the problem," Bailey said. "That's the biggest thing I noticed. It's been there most of the year."

Bruce's third homer of the season was part of a Mets resurgence. They hit the road after getting swept during a six-game homestand that included three shutout losses and 11 runs total by their offense. Michael Conforto got it going with a leadoff homer against Bailey, and Bruce had a two-run shot off his former teammate in the third for a 4-0 lead.

“We’re excited as hitters to come here,” said Conforto, who was in an 0-for-13 slump and had gotten the last couple days off. “We talked about it. Here it’s a small park.”

Gonzalez had a pair of solo shots as the Mets set a season high with four home runs.

P.J. Conlon lasted three and two-thirds innings in his major league debut, filling in with Jacob deGrom on the disabled list because of a hyperextended elbow. Conlon also had a single off Bailey, and it wound up costing him. He hurt his thumb on the hit and it contributed to his early exit.

“I went back on the mound and I didn’t really have feeling on that thumb,” Conlon said. “I didn’t have a guide on any of my pitches.”

Robert Gsellman (4-0) gave up only a solo homer in two and two-thirds innings for the win. Jeurys Familia retired the side in order in the ninth with two strikeouts for his 10th save in 13 chances.

Billy Hamilton, Eugenio Suarez and Scooter Gennett hit solo homers for the Reds. Cincinnati fell to 8-27, matching the worst 35-game start in franchise history along with the 1931 and 1934 teams. It's the worst start in the majors since the Tigers had the same record in 2013.

Conlon was born in Belfast, and his family moved to California a couple years later. He's the 46th player born in Ireland or Northern Ireland to play in the majors. The last was Joe Cleary with the Washington Senators in 1945.

It was Conforto's seventh career leadoff homer and the first this season by a Mets batter.

The Reds recalled RHP Jackson Stephens from Triple-A and optioned RHP Kevin Shackelford. Stephens made one relief appearance for the Reds earlier this season.

Mets: LF Yoenis Cespedes was back in the starting lineup. He left Sunday's game with tightness in his right thigh. Cespedes had a sacrifice fly and a pair of doubles before leaving for a pinch runner in the ninth.

Reds: Anthony DeSclafani will throw up to 50 pitches in a game on Wednesday at the team's spring training complex in Arizona, the next step in his comeback from an oblique injury sustained during spring training.

Mets: LHP Jason Vargas (0-2) makes his third start of the season. He's 1-0 in two career starts against the Reds.

Reds: Luis Castillo (1-4) makes his first career start against the Mets. The Reds are 2-5 in his seven starts this season.