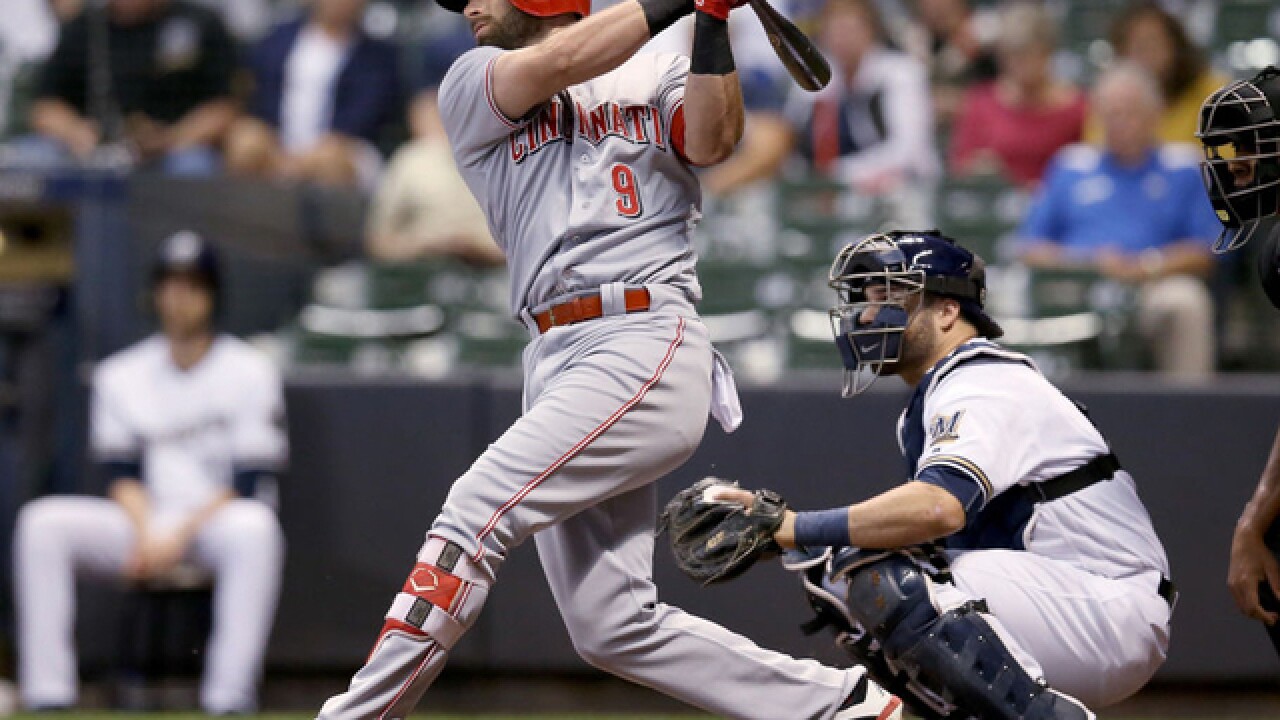 Image copyright 2018 Getty Images. All rights reserved. This material may not be published, broadcast, rewritten, or redistributed.
Dylan Buell
<p>MILWAUKEE, WI - SEPTEMBER 18: Jose Peraza #9 of the Cincinnati Reds hits a home run in the first inning against the Milwaukee Brewers at Miller Park on September 18, 2018 in Milwaukee, Wisconsin. (Photo by Dylan Buell/Getty Images)</p>

"The first pitch is just kind of a blooper into center field and then he fell behind Peraza," Brewers manager Craig Counsell said. "But after six pitches, we're down 2-0."

The Brewers' edge for the top NL wild-card spot was cut to two games by St. Louis, with Colorado also in close contention. Milwaukee fell 3 ½ games behind the NL Central-leading Chicago Cubs.

Milwaukee managed only three hits against five Cincinnati pitchers. It was the third low-scoring loss for the Brewers in four games — they fell to Pittsburgh 3-1 on Saturday and 3-2 on Sunday.

"We're going to have to do a little better than that, for sure," Counsell said. "More pressure has to be put on the other team. There was nothing really happening tonight. I don't know if we had a significant rally really all night."

Scott Schebler opened the first with a single to left off Anderson, who has allowed an NL-high 30 home runs. Peraza then connected for his 13th homer.

The Brewers made it 2-1 with an unearned run in the second, but the Reds made it 3-1 in the fourth on Schebler's RBI double.

Michael Lorenzen, making his first start since 2015 after 151 relief appearances, allowed one unearned run on one hit in four innings. Sal Romano (8-11) followed with 2 1/3 scoreless innings for the victory.

Raisel Iglesias struck out three in the ninth after a leadoff walk for his 28th save.

"I've been saying, 'Give me a chance, give me a chance.' They gave me a chance against a good lineup, so I was excited about that," said Lorenzen, who has indicated he would like to be a starter. "It was like, 'Man, you better step up.'"

Anderson (9-8) gave up three runs on six hits with two walks in 3 2/3 innings, matching his shortest start of the season. Six relievers blanked the Reds the rest of the way.

"I was just kind of inconsistent where I could throw the ball tonight," Anderson said. "One inning I felt I could make a pitch, the next inning I couldn't. So, it's just kind of the inconsistency I've been battling, I would say, pretty much this whole season."

In the Milwaukee second, Travis Shaw was hit by a pitch and advanced on a groundout. Shaw came around when Schebler bobbled Jonathan Schoop's single to right.

Reds center fielder Mason Williams made a sensational, over-the-shoulder basket catch on Curtis Granderson's one-out drive to the warning track in the sixth. It prevented a possible run as Christian Yelich followed with a single.

"A couple people on the bench thought that ball was gone," manager Jim Riggleman said. "I didn't think it was going to go as far as it did. Mase did a great job on it. That one was close. We're trying to keep it in the ballpark as much as we can. We did a good job of that tonight."

RHP Homer Bailey probably will not pitch again this season, Riggleman said. Bailey (1-14, 6.09 ERA) was removed from the rotation after his last start Sept. 5, and has indicated he can't relieve. ... RHP Tyler Mahle, bothered by right shoulder fatigue, is not ready to start Sunday, Riggleman said.