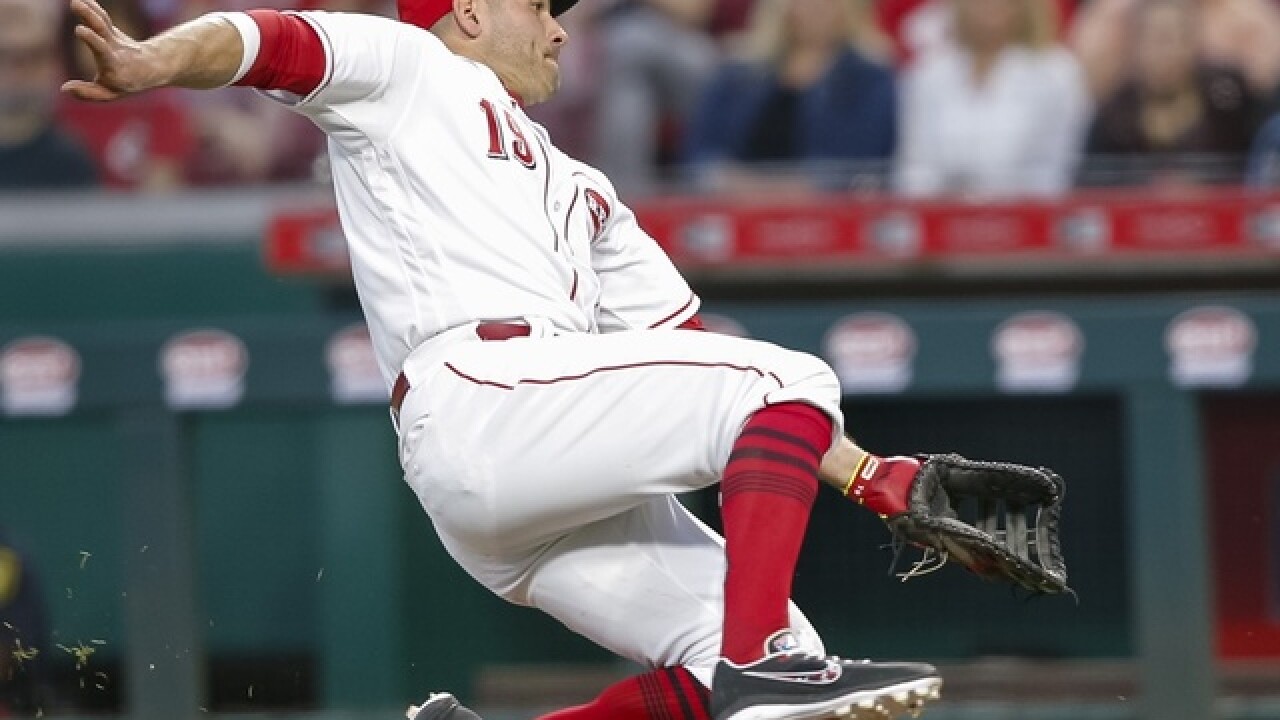 Image copyright 2018 Getty Images. All rights reserved. This material may not be published, broadcast, rewritten, or redistributed.
Michael Hickey
<p>CINCINNATI, OH - MAY 01: Joey Votto #19 of the Cincinnati Reds slides to catch the bunted ball during the game against the Milwaukee Brewers at Great American Ball Park on May 1, 2018 in Cincinnati, Ohio. (Photo by Michael Hickey/Getty Images)</p>

CINCINNATI (AP) -- Ryan Braun hit a tiebreaking double and Travis Shaw ended his deep slump with a two-run homer Tuesday night, powering Milwaukee to a 7-6 victory over the Cincinnati Reds in another resurgent night for the Brewers' struggling offense.

Milwaukee came into a series in an historically bad slump -- only two runs and 14 hits total while getting swept during a four-game series at Wrigley Field. The Brewers have broken out against a Reds team off to its worst start since the Great Depression.

Braun's two-run double off Homer Bailey (0-4) put the Brewers ahead to stay 5-3 in the fifth inning, Milwaukee's second straight game with at least six runs. The Reds have lost all of Bailey's seven starts this season.

Chase Anderson (3-2) overcame a rough opening inning to get his third win in his last four starts. Jeremy Jeffress preserved the 7-6 lead in the eighth, pitching out of a two-on threat by fanning Joey Votto and retiring Scott Schebler on a grounder. Jeffress finished for his first save since 2016.

Eugenio Suarez led the Reds with a two-run homer and a sacrifice fly. In six games back from a broken thumb, Suarez is batting .360 with three doubles, 10 RBIs and a homer.

Milwaukee made a move to add a position player temporarily, calling up OF Brett Phillips from Triple-A Colorado Springs and optioning RH reliever Brandon Woodruff.

Brewers: RH Corey Knebel will start a rehab assignment Thursday and make three or four appearances. He's been sidelined by a strained left hamstring since April 6.

Reds: An MRI on Scooter Gennett's sore throwing shoulder found no significant injury. He was out of the lineup for a second straight day, but pinch hit and grounded out.

Brewers: LH Wade Miley will be activated and make his Milwaukee debut. He signed a minor league deal on Feb. 16 and suffered a strained groin while fielding a bunt on March 21. When added to the 40-man roster, he'll get a one-year deal with a salary of $2.5 million while in the majors and the chance to earn up to $3.2 million in performance bonuses.

Reds: Luis Castillo (1-3) is coming off his worst career start. He gave up five runs while pitching into just the second inning last Friday at Minnesota.