No other Reds hitters contributing 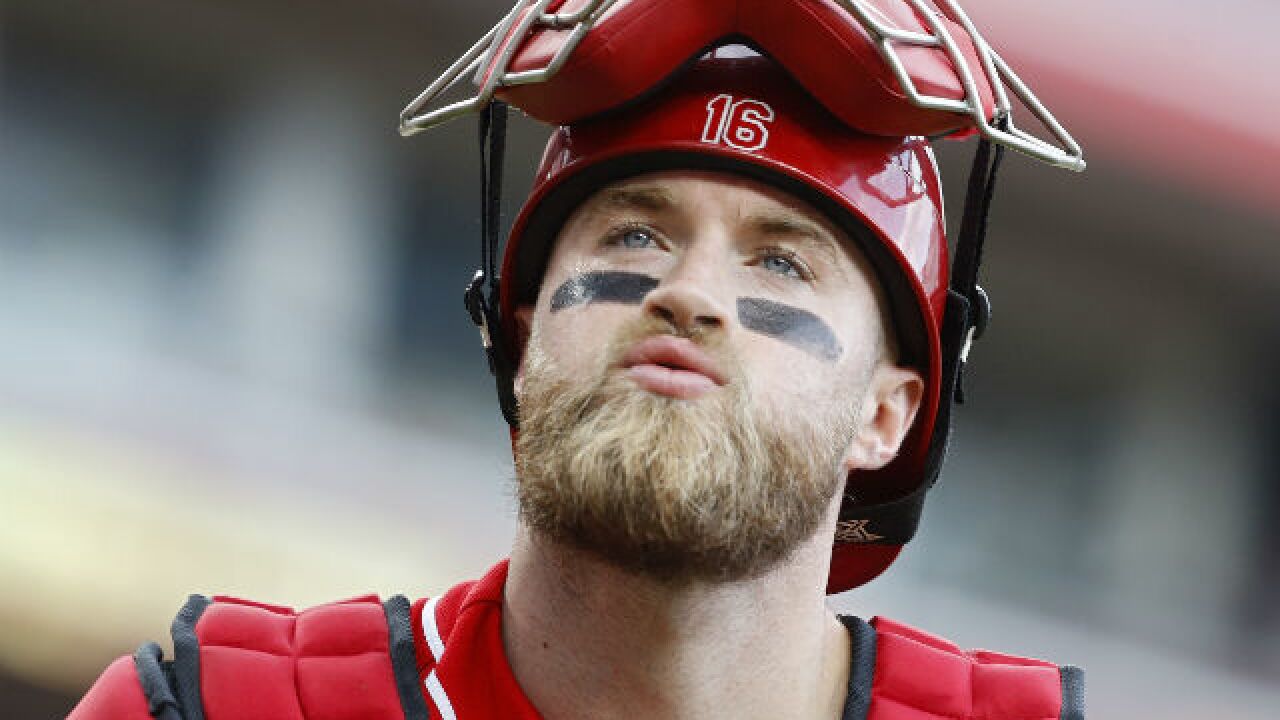 Image copyright 2018 Getty Images. All rights reserved. This material may not be published, broadcast, rewritten, or redistributed.
<p>CINCINNATI, OH - MAY 06: Tucker Barnhart #16 of the Cincinnati Reds reacts as he heads back to the dugout after the final out in the first inning against the Miami Marlins at Great American Ball Park on May 6, 2018 in Cincinnati, Ohio. The Marlins scored four runs in the inning. (Photo by Joe Robbins/Getty Images)</p>

CINCINNATI - What’s worse: Brandon Finnegan giving up five runs in 3 1/3 innings or Reds hitters not named Joey Votto getting five hits total in an 8-5 loss to the Marlins Sunday?

The Reds wasted another big day by their first baseman - four hits, including a two-run homer, and four RBI. But the way the rest of the team hasn't been hitting, their fate seemed assured as soon as the Marlins struck for four runs in the first inning and one in the second.

"It was a (tough) way to start the game,” said Finnegan (0-3). “It made it tough on the hitters to come back ... The more we lose, the more pressure we put on ourselves and try to be too fine.”

“We didn’t get much out of Brandon,” interim manager Jim Riggleman said. “We had to piece it together. The Marlins kept pecking away. Even when they didn’t score, they forced us to make pitching changes.”

Nothing right went for the Reds in the past two games, including Saturday's 6-0 shutout. Votto had two of the Reds’ four hits Saturday, four of their nine on Sunday.

Hit totals for the weekend: Votto six; rest of the team seven.

Votto’s third-inning opposite-field homer to left snapped Cincinnati’s 18-inning scoreless streak. He added an RBI double in the seventh and a run-scoring single in the ninth. But he couldn’t keep the Reds from slipping to 8-26 for the third time in franchise history and first since 1934.

Tucker Barnhart had two hits and Jesse Winker drove in the other Reds' run on a ninth-inning groundout to first.

Who took their rally cap off?

The Marlins sent nine batters to the plate in the first as Finnegan walked three and second baseman Scooter Gennett committed a throwing error. Finnegan needed 39 pitches to get the first three outs.

Finnegan left the game after Marlins starter Dan Straily singled to left with one out in the fourth inning. The hit was Straily’s sixth in 112 career at bats (.054).

The Marlins scored once off Kevin Shackelford in the seventh and twice off Wandy Peralta in the ninth,

“We talked early in the year about how I thought we were playing pretty good,” manager Don Mattingly said after the Marlins improved to 13-20. “We were playing close games and finding ways to lose. Now, we’re finding ways to win. To get back into it, we have to do it like this — winning two out of three.”

J.T. Realmuto reached base four times and scored twice for the Marlins, who won the last two games of the series after losing Friday’s opener.

A 73-minute rain delay after the fourth inning cost Straily a shot at his first win of the season. In his second start since coming off the disabled list, the former Reds right-hander allowed two runs, three hits and four walks with two strikeouts in four innings.

“That was really unfortunate,” Straily said of his rain-induced departure. “I felt good.”

Nick Wittgren (1-0) took over and struck out four while giving up one hit in two innings. Tayron Guerrero allowed a run in the seventh and Kyle Barraclough pitched a scoreless eighth, but the Reds scored two against Junichi Tazawa before Brad Ziegler came on to earn his fourth save.

The Reds reinstated LHP Amir Garrett from the bereavement list before Sunday’s game. Garrett left the team on Thursday and hurried back on Sunday in time to be activated.

Marlins right fielder Brian Anderson came charging in, then made an abrupt left turn and flagged down Tucker Barnhart’s line drive with a diving catch with nobody out and Scott Schebler on first in the fourth inning.

Billy Hamilton’s seventh-inning double boosted his average over .200 up to .204. He has a season-high five-game hitting streak.

Reds: RHP Anthony DeSclafani was scheduled to throw on the side at extended spring training in Arizona on Sunday, two days after throwing 29 pitches over two innings. DeSclafani strained his left oblique in spring training.

Marlins: LHP Jarlin Garcia (1-0) makes his first career start against the Cubs in the opener of a three-game series at Chicago.

Reds: RHP Homer Bailey (0-4) makes his 200th career start in the opener of a three-game series against the Mets in Cincinnati.