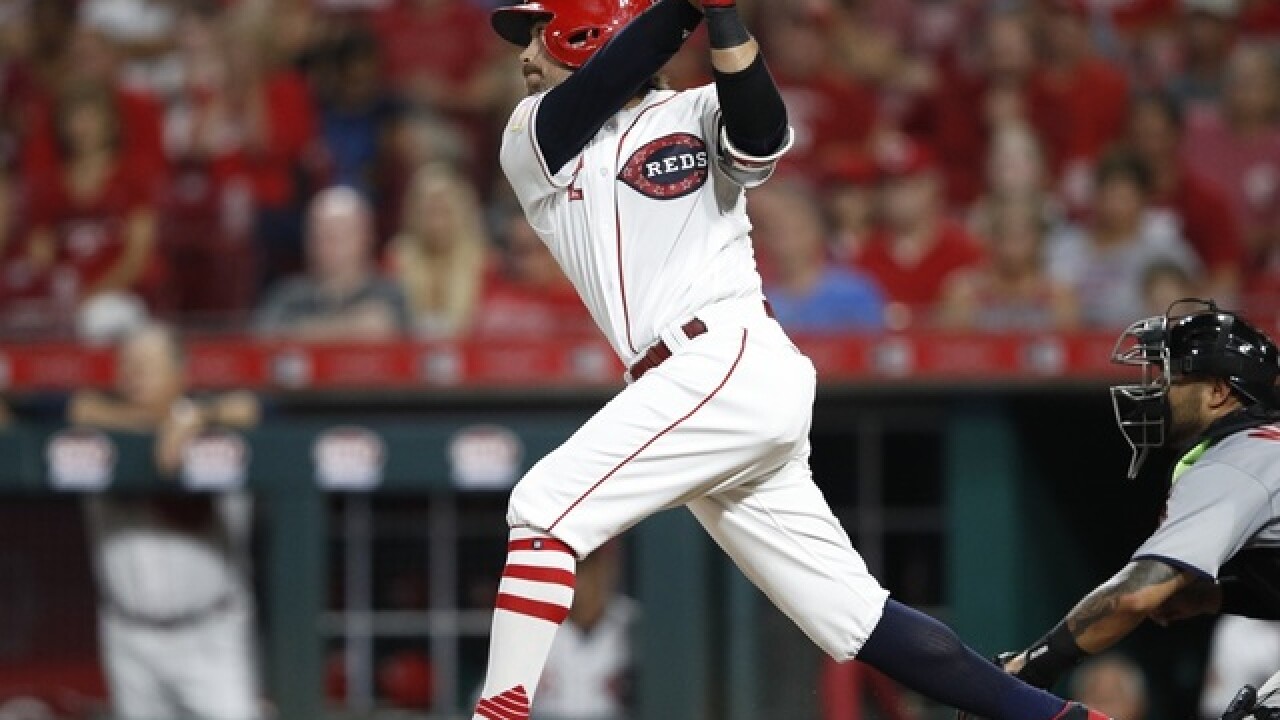 Image copyright 2018 Getty Images. All rights reserved. This material may not be published, broadcast, rewritten, or redistributed.
Joe Robbins/Getty Images
<p>CINCINNATI, OH - JULY 02: Alex Blandino #2 of the Cincinnati Reds hits a double to right field to drive in two runs to the give his team the lead in the eighth inning against the Chicago White Sox at Great American Ball Park on July 2, 2018 in Cincinnati, Ohio. The Reds won 5-3.</p>

CINCINNATI -- All the Reds needed was one misstep by the White Sox to pull out another comeback win, with Alex Blandino delivering the final hit.

Blandino's double in the eighth inning completed Cincinnati's four-run rally for a 5-3 victory Monday night. Chicago returned to Great American Ball Park for the first time since 2009 and let one slip away with the help of a misplay that changed everything.

"If we secure one out either way ... " White Sox manager Rick Renteria said.

The Reds loaded the bases with one out against Chris Volstad (1-5). Adam Duvall grounded to first baseman Matt Davidson, who was indecisive and wound up failing to get an out.

Davidson intended to step on first and then throw home. He took several steps toward the base and changed his plan, throwing to the plate without stepping on first -- too late to get Scooter Gennett sprinting in to score.

"I kind of just rushed myself and made a mistake and didn't touch the base and threw home," Davidson said. "I looked up and saw the runner and forgot about touching first. I just messed up there."

Billy Hamilton followed with a sacrifice fly that tied it at 3, and Blandino's pinch-hit double put the Reds in position for another comeback win. They've trailed in seven of their last 10 victories.

Blandino has learned to pinch-hit this season. He is 7 for 21 off the bench with four RBIs.

"Pinch-hitting is something I've been working on since spring training," he said. "This is my first time coming off the bench. You're facing the back end of the bullpen. You just try to stay on their best pitch and battle."

Dylan Floro (3-2) retired two in the eighth. Raisel Iglesias pitched the ninth for his 16th save in 18 chances.

Until Chicago's bullpen melted down, James Shields was in position to get his first road win since opening day. Chicago has scored three runs or less behind him in 14 of his last 16 starts.

"We were the ballgame all the way up to the end there," Shields said. "Unfortunately, we made a couple mistakes there at the end."

Scott Schebler connected on Shields' first pitch of the game, but he allowed only three more hits while going 6 2/3 innings.

The White Sox pulled ahead 2-1 in the seventh when Yoan Moncada doubled home the tying run and came around on Yolmer Sanchez's single. Avisail Garcia added his fifth homer in the eighth. Garcia extended his hitting streak to a career-high 12 games.

Chicago's Jose Abreu went 0 for 3, ending his 19-game hitting streak in interleague play -- one shy of Paul Konerko's club record. Abreu fouled a ball off the inside of his left ankle in the sixth inning and left for a pinch hitter in the seventh.

The White Sox have dominated the series with the Reds, going 16-5. They've won 10 of the 13 games in Cincinnati.

The Reds improved to 34-33 under interim manager Jim Riggleman, who took over on April 19 when Bryan Price was fired after a 3-15 start.

Shields won Chicago's season opener at Kansas City and hasn't won on the road since then, largely because of the lack of run support. He's 1-4 on the road this season.

White Sox: CF Leury Garcia was out of the lineup a day after he left a game with a jammed finger on his left hand. Renteria said Garcia was available to pinch-hit.

Reds: Homer Bailey makes his fourth rehab start for Triple-A Louisville on Tuesday. In three starts, he has allowed 22 hits and 15 earned runs in 16 innings.

Reds: Anthony DeSclafani (3-1) makes his sixth start since returning from a strained oblique. He has never faced the White Sox.