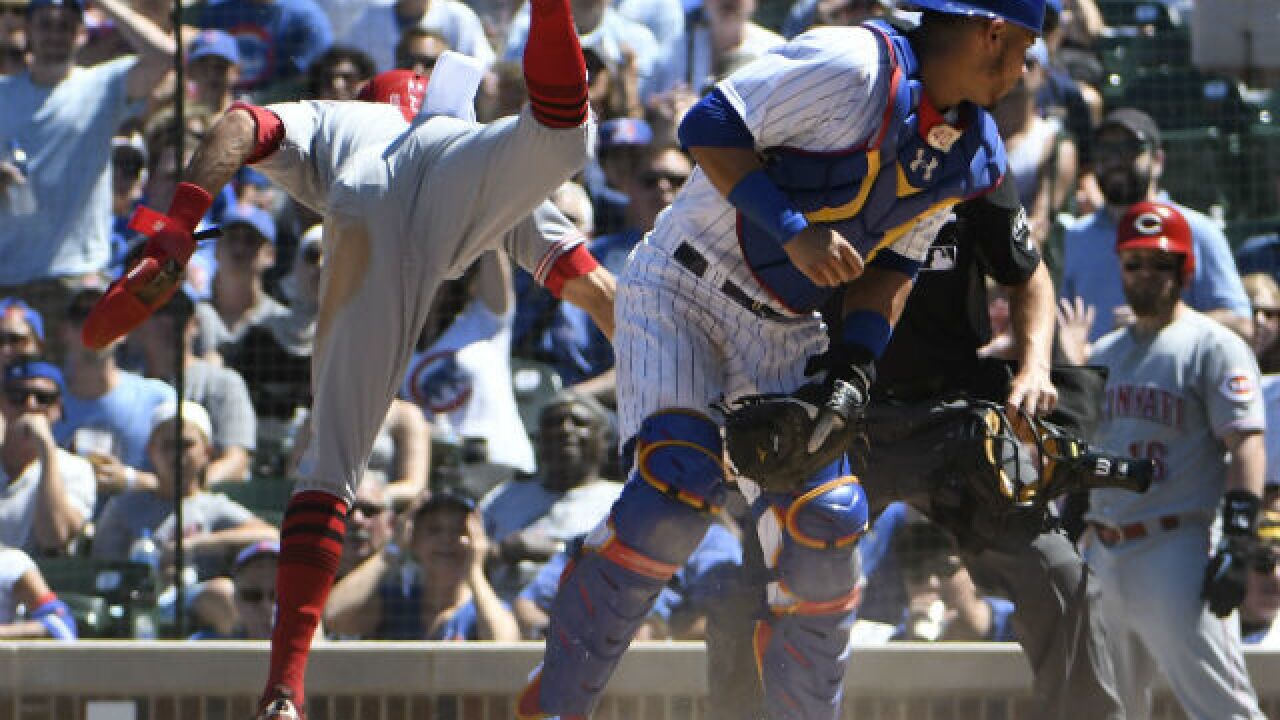 Image copyright 2018 Getty Images. All rights reserved. This material may not be published, broadcast, rewritten, or redistributed.
<p>CHICAGO, IL - JULY 08: Billy Hamilton #6 of the Cincinnati Reds is safe at home as Willson Contreras #40 of the Chicago Cubs can't handle the throw during the fifth inning on July 8, 2018 at Wrigley Field in Chicago, Illinois. (Photo by David Banks/Getty Images)</p>

For the second day in a row, the Reds blew a late lead and lost to Cubs. But the way it happened Sunday must have Reds fans groaning even louder than they did Saturday.

Reliever Jackson Stephens (2-2) was the goat, but it wasn't just his fault. Defensive miscues by Joey Votto, Billy Hamilton and Scooter Gennett also contributed to the Cubs'  6-5 win in 10 innings.

After Stephens gave up a walk, a wild pitch, and an intentional walk in the 10th, Votto fielded a grounder but bobbled the ball as he stepped on first base. That loaded the bases, and Stephens walked in the winning run.

Three innings earlier, the Cubs rallied for two runs to take a 5-4 lead thanks to a lackadaisical play by Hamilton. After a single scored a run and sent Jason Heyward from first to third, Hamilton lobbed a throw to the infield and Heyward broke for home. Gennett’s relay was way up the third-base line and Heyward scored the go-ahead run.

"That game had a little bit of everything," Cincinnati manager Jim Riggleman said. "It had big hitting, it had good defense, it had unearned runs. It just came down to they got the last at-bat, and walks played a big part. Your defense sometimes is going to suffer when you're going into deep counts, walking people and so forth."

Adam Duvall hit a game-tying, ninth-inning homer for the Reds, but that went to waste. Eugenio Suarez also homered.

Javier Baez had two hits and two RBIs for Chicago, which has won its last nine games in comeback fashion. The Cubs scored four times in the eighth inning on Saturday for an 8-7 win.

Willson Contreras led off the 10th with a walk and advanced on a wild pitch with Victor Caratini at the plate. After Caratini struck out, Happ was intentionally walked.

Russell then hit a weak roller to first base. Votto fielded the ball cleanly and had an easy play, but tried to take the ball out of his glove before reaching the bag — to hold Contreras at third — and bobbled it. Russell was initially called out, but the call was overturned following a review, loading the bases with one out.

Bote worked the count to 3-2 and then took a high fastball for ball four.

BILLY ON THE RUN

Hamilton gave the Reds the 4-3 lead by producing a run in the fifth without a hit. He walked, stole second and went to third as Contreras' throw went into center. When Almora failed to pick it up cleanly, Hamilton raced home.

The Cubs placed right-hander Anthony Bass on the 10-day disabled list due to an illness and brought up right-hander James Norwood from Triple-A Iowa. The move with Bass is retroactive to Thursday.

The 24-year-old Norwood began the season with Double-A Tennessee and was promoted to Iowa on June 25. He has tossed 5 1/3 scoreless innings over four appearances with Iowa.

Cubs: 3B Kris Bryant (left shoulder inflammation) will begin a rehab assignment with Double-A Tennessee on Monday. Bryant said he is hoping to rejoin the team in San Francisco during the three-game series that begins on Monday.