As Reds prepare for Friday's opener, players are feeling 'good vibes only' 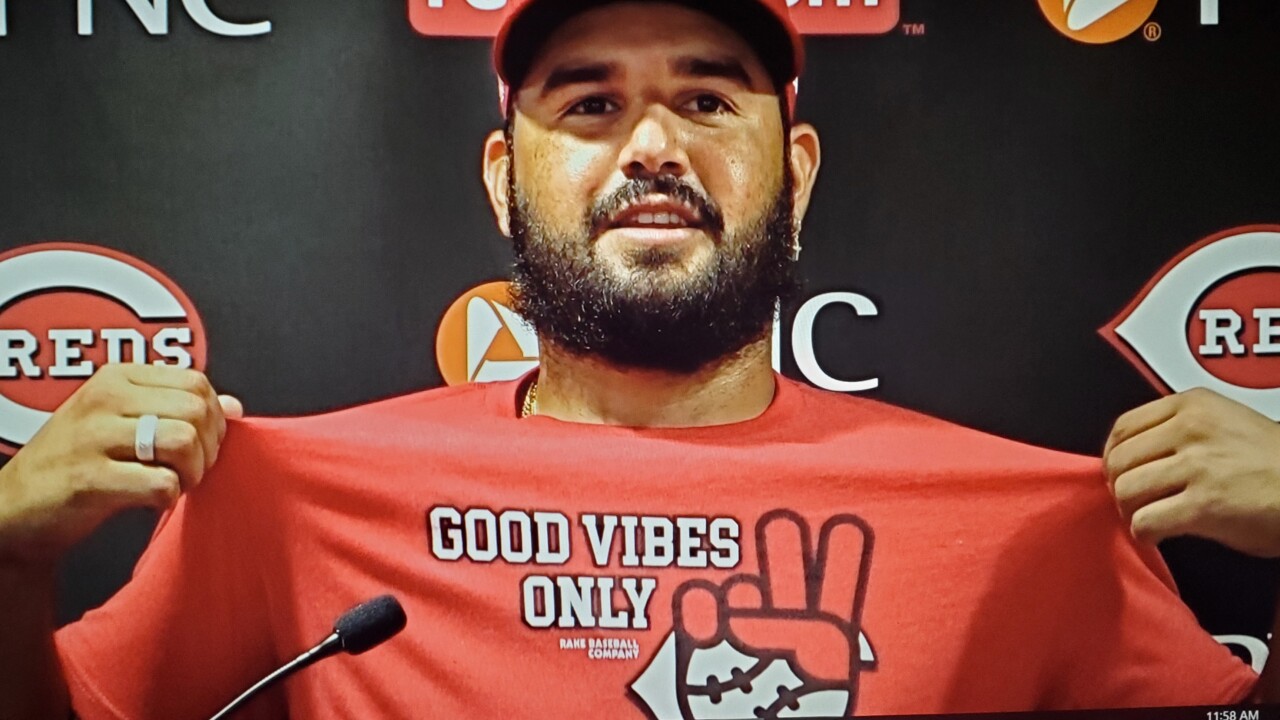 Provided
The Reds' Eugenio Suarez shows off his "good vibes only" T-shirt.

CINCINNATI — The slogan on Eugenio Suarez’s T-shirt during Monday’s media video conference was an appropriate mantra for the upcoming Cincinnati Reds season, and it fit with the clubhouse culture that manager David Bell says began to develop during spring training.

As the Reds prepare to open their abbreviated 60-game season on Friday against the Detroit Tigers at Great American Ball Park, the Reds are indeed feeling “good vibes only.”

“Good vibes only is just how we have to approach the game,” Suarez said. “We’ve got a short season and we have to put our best in the field and the clubhouse. This is going to be quick. No matter what happens, you have to enjoy the games. Go out, play hard.”

With several new additions to the roster this season, Bell felt he needed to do something during spring training in Goodyear, Arizona, to help build team chemistry. So, the players held a talent show, the details of which Bell, who served as a judge, won’t reveal.

But the second-year Reds skipper learned early on that he didn’t have to get too creative to bring the players closer together. It just kind of happened.

“We added quite a few guys,” Bell said. “You don’t know what that’s going to do to the chemistry of the team, but it just added to it. All the players that came in for their first year here have fit in great.”

Then on March 12, everything changed. The remainder of spring training was canceled due to the COVID-19 pandemic, and the players had to pack up and head home.

For more than four months, the only contact Reds players had with one another was via text messages and Zoom calls. Bell was concerned the lockdown would weaken the bond the players had built in Goodyear, but it hasn’t.

“We were making a lot of progress throughout the whole camp, then all of a sudden we broke camp,” Bell said. “You wonder if you can pick up where you left off. Guys talked, but they missed what they had going. For whatever reason, we came back together and felt like it was even stronger.”

In these unprecedented times, a Reds ballclub that has high hopes for the 2020 season is making the most of the hand it has been dealt. While Friday figures to be among the most unusual Opening Days in franchise history, Reds players are just focused on achieving the goal they set back in February in Goodyear: to win.

“I feel very strongly about the group we have here, and I think it’s going to be a great little season for us,” said Reds outfielder Jesse Winker. “It’s going to be a unique year. But once they said there’s going to be a baseball season, I chalked it up to that and just getting ready. When the season comes, it’s all about winning.”

Over the past three weeks, the club has been training and playing intra-squad games in Great American Ball Park with no fans in the seats. But players have made the best of it. Bell said the limited amount of time required to prepare for Opening Day helped the players maintain focus. They are approaching this abbreviated season with the same vigor they would a 162-game slate, and Bell said the camaraderie they built in spring training is stronger than ever.

And a focus on winning. Before the pandemic delayed the season, the Reds were favored to contend for the National League Central title, and that hasn’t changed.

Much of the optimism surrounding the club is directly related to the addition of veteran Wade Miley to an already formidable pitching staff featuring Opening Day starter Sonny Gray, Trevor Bauer and Luis Castillo. MLB.com ranked the Reds’ starting pitching staff the fourth-best in baseball.

“The rotation’s going to be electric,” Winker said.

The Reds also bolstered their lineup with the additions of Mike Moustakas, Japanese free agent Shogo Akiyama and Nick Castellanos. Suarez is fully healthy now after an offseason shoulder injury, which likely would have caused him to miss Opening Day had the season started on time.

Bell said the players are so focused on winning that even the unusual circumstances they are operating under have felt more normal with each passing day.

“The players deserve a lot of credit for this,” he said. “They’ve made it normal. The focus and the intensity on the field is there. In some ways it will always be a little bit foreign throughout the whole year, because it’s something we’ve never done.”

It won’t feel anything like Opening Day on Friday. No parade, no crowd, not much in the way of pomp and circumstance. But Suarez and his teammates are approaching things as they have throughout these trying times – with good vibes.

“They’re always happy, smiling in the clubhouse,” Suarez said of his teammates. “They enjoy what they’re doing. Being around people like that brings a good vibe to the clubhouse. I feel this year is going to special for the fans. They’ve been waiting a long time for a championship.”