Angels in the outfield? Reds rally past Cubs with seven-run seventh for seventh straight win 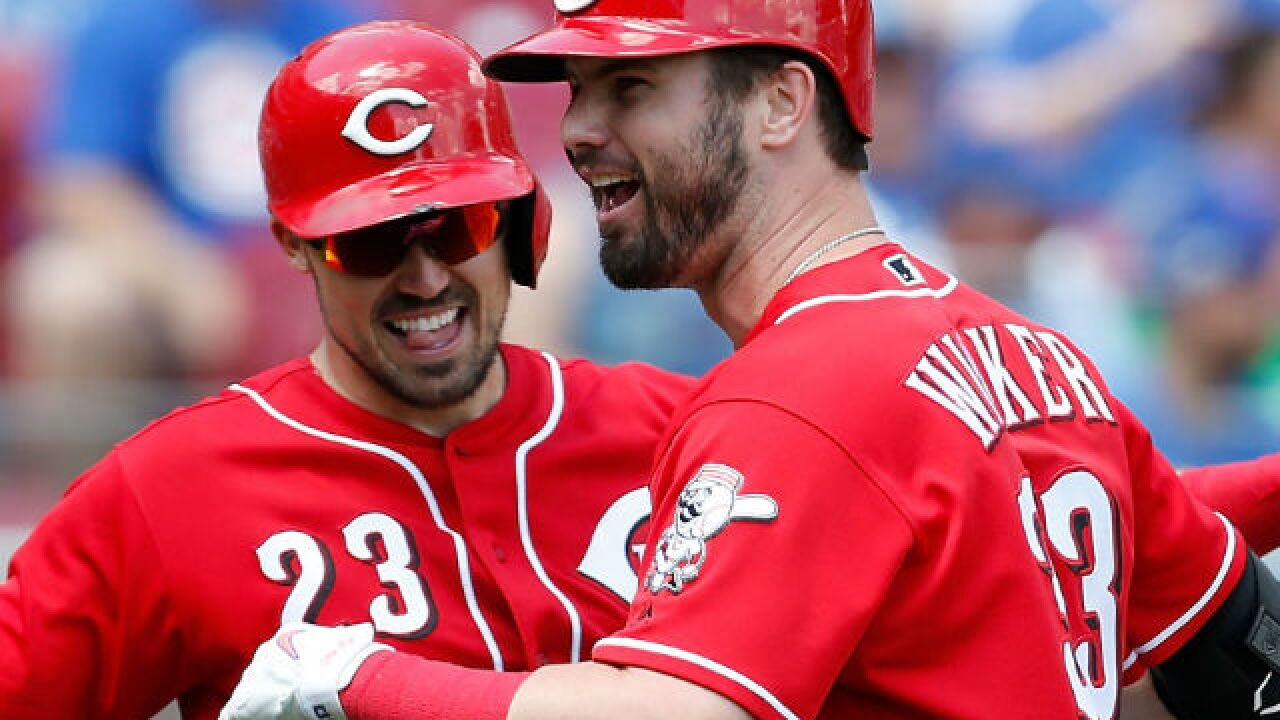 Image copyright 2018 Getty Images. All rights reserved. This material may not be published, broadcast, rewritten, or redistributed.
<p>CINCINNATI, OH - JUNE 24: Jesse Winker #33 of the Cincinnati Reds is congratulated by Adam Duvall #23 after hitting a three-run home run during the seventh inning of the game against the Chicago Cubs at Great American Ball Park on June 24, 2018 in Cincinnati, Ohio. Cincinnati defeated Chicago 8-6. (Photo by Kirk Irwin/Getty Images)</p>

CINCINNATI — Angels in the outfield? How did the last-place Reds suddenly become unbeatable?

“In a game like today, we feel like we’re not meant to lose,” reliever and slugger Michael Lorenzen said Sunday.

Lorenzen connected for a pinch-hit homer to begin Cincinnati’s comeback and Jesse Winker added a pinch-hit three-run homer in a seven-run seventh inning that sent the Reds over the Chicago Cubs 8-6 for their seventh straight victory.

The Reds completed a four-game sweep of the Cubs for the first time since 1983 at Riverfront Stadium. Their winning streak is their longest since a 10-game surge in July 2012.

“We know what we can do,” Winker said. “It is cool coming to the field and expecting to win. We’re in June right now. We are taking care of June. To win a game, it takes a group effort. There’s plenty of season left.

"We’re going to keep grinding good at-bats. It’s been a lot of fun.”

"We had that stretch where we were down three or four runs in the early innings. We were competitive and came back in some of them. As of late, we haven’t had to do that. The starters have done a good job.”

With the Cubs ahead 6-1, Winker went opposite field with relief pitcher Pedro Strop’s first pitch after relieving emergency starter Mike Montgomery, driving it into the left field seats to cut Chicago’s lead to 6-5. Joey Votto delivered the go-ahead double as the next four batters reached against Strop (3-1), who retired just two of nine batters.

“Strop had plenty of rest — maybe too much,” Cubs manager Joe Maddon said. “I felt like he was the right guy. It just didn’t work. They got two pinch-hit homers, one by a pitcher. They had some great at-bats.”

Said Strop: “It’s always good to be fresh. I’m not blaming that. I didn’t feel like I had command of my fastball. I think that was the key. I was getting behind hitters, and I was a little bit too fine when I got ahead."

Lorenzen’s homer in the fifth inning was the third of his career and second in two games by a Reds pitcher. Anthony DeSclafani hit a grand slam on Saturday — the first by a Reds pitcher since 1959.

Jose Peraza had two runs batted in and Tucker Barnhart had the game-tying RBI as the Reds set a season high for runs.

Seven runs are the most allowed in one inning this season by the Cubs, who have lost six of their last eight games and were swept in a four-game series by the Reds for the first time since April 8-11, 1983, at Riverfront Stadium.

The Reds overcame a fifth-inning two-run homer by slumping Anthony Rizzo, who went 1-for-14 in the series, and a solo shot by Albert Almora Jr. off Jackson Stephens (1-0), which gave Chicago a 6-1 lead in the seventh.

Montgomery started in place of Tyler Chatwood, who left for Chicago early Sunday morning when his wife went into labor. The left-hander kept the Reds scoreless until Lorenzen’s homer with two outs in the fifth. inning

The Cubs had at least one baserunner in every inning except the fourth against Reds starter Sal Romano. They reached him for eight hits and five runs with a walk and six strikeouts in five innings.

Amir Garrett had three strikeouts in the eighth before Raisel Iglesias ;picked up his 13th save.

Reds 3B Eugenio Suarez went 0 for 3 before leaving in a double switch, snapping his hitting streak at a career-high 13 games, the longest active streak in the major leagues.

Cubs RHP Yu Darvish is expected to throw 75 pitches or four to five innings of his first rehab start on Monday with Single-A South Bend. Darvish has been out since May 20 with right triceps tendinitis.

The Reds activated OF Scott Schebler from the bereavement list before Sunday’s after missing three games, the minimum amount of time he could spent on the list. OF Phillip Ervin was optioned to Triple-A Louisville. Schebler went 1 for 3 with two walks.

WAIT TILL NEXT YEAR

Sunday’s game was the Cubs’ last in Cincinnati this season. The remaining 10 games between the two teams will be played in Chicago.

Cubs: 3B Kris Bryant missed his second straight start and is day-to-day with a sore left shoulder.

Reds: RHP Homer Bailey, out since June 2 with right knee inflammation, threw 86 pitches in six innings of a rehab start with Triple-A Louisville on Saturday.