Just ask the players who preceded them 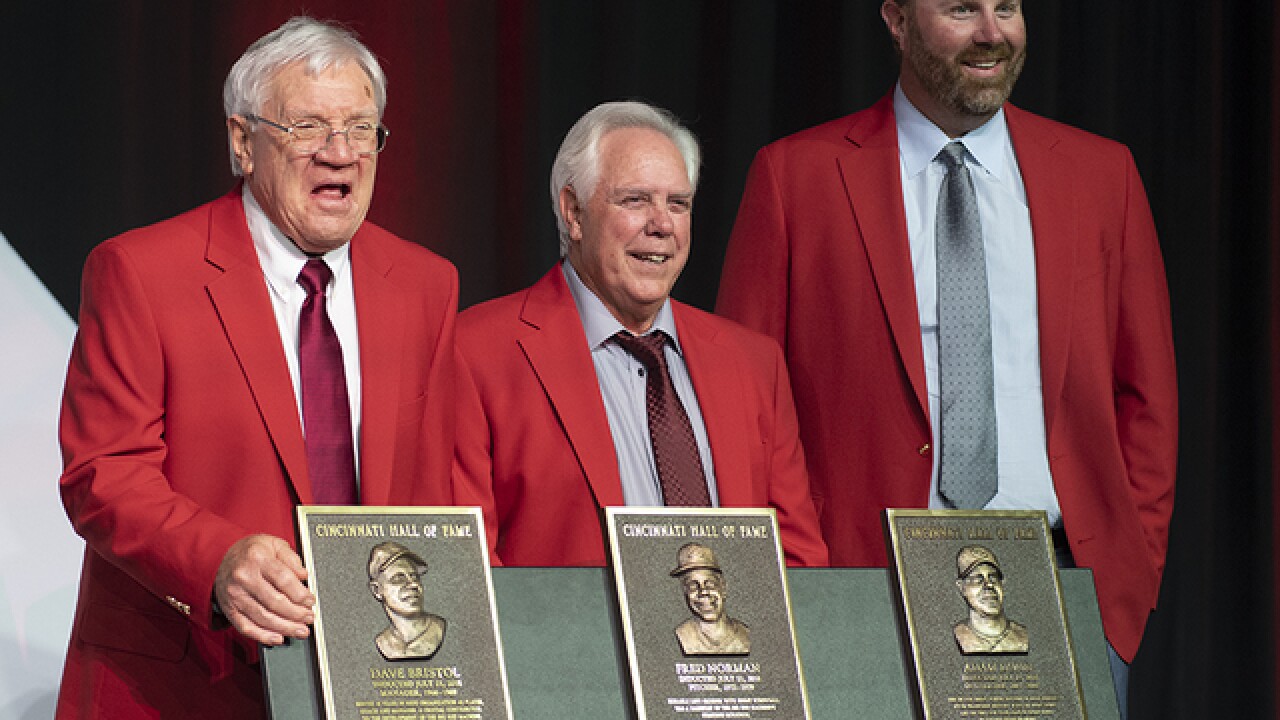 CINCINNATI - The Reds never finished higher than third during Adam Dunn’s eight seasons here. But the “Big Donkey” made an indelible mark on Reds franchise history with his mammoth home runs and colorful persona.

Dunn was inducted into the Cincinnati Reds Hall of Fame this past weekend along with former manager Dave Bristol and Big Red Machine left-hander Fred Norman. Dunn was the top vote-getter selected by fans, Reds alumni and select media members.

Despite all the losing and five different managers who were unable to stem the tide from 2001 to 2008, Dunn’s 270 home runs, most of them prodigious, gave fans something to cheer about.

The Reds clubhouse during that time was packed with personality, with Ken Griffey Jr., Sean Casey, Barry Larkin and a 6-foot-6 Texan serving as the ringleaders.

“Dunner was right there in the forefront,” Casey said. “He was like my little brother. I love him so much. I’ve played on better teams … but it was special. In the back of the planes, it was like the whole team was back there. We’d be having a good time, having some laughs. I felt like that would translate to the field. We just didn’t have the pitching. You give us two legit starters, we could have done some great things.”

A left-handed slugger for 14 big-league seasons, Dunn hit 270 of his 462 career home runs in a Reds uniform. Only Johnny Bench, Tony Perez, and Frank Robinson hit more as a Red. Dunn owned a .520 slugging percentage, which ranks third in Reds franchise history.

Dunn could have hung around long enough to reach the 500-home run mark but said “I didn’t think it was fair to hang around to chase numbers.”

On Aug. 10, 2004, Dunn hit the longest home run in Great American Ball Park history - an estimated 535 feet - off the Dodgers’ Jose Lima. The ball reportedly came to rest on a piece of driftwood along the banks of the Ohio River, where it was retrieved by a Reds employee.

“There were homers I thought I hit better, and they said it was only 411 feet,” said Dunn, in his unassuming manner.

Dunn hurriedly dressed at his locker following the Reds’ 9-8 victory over the Cleveland Indians on June 30, 2006 while a horde of reporters encircled him to ask about the walk-off home run he hit minutes earlier.

It wasn’t just any home run, it was a grand slam off Indians closer Bob Wickman that capped an epic nine-run rally in the final two innings, one that in the years since has become among the most discussed in Reds franchise history.

It wasn’t that the usually approachable Dunn didn’t want to discuss his dramatic slam, it was just that he had a pressing obligation: He and several of his Reds teammates were late for a Nickelback concert at U.S. Bank Arena.

“It was Nickelback,” Dunn said. “I’m almost ashamed to admit that now. We were sitting in the dugout and (former Reds first baseman) Scott Hatteberg said, 'Hey, if you get up we'll have a chance to win it.' I'm like, 'That's 12 hitters away.' Sure enough, it worked out.”

When a reporter asked Dunn how he managed to push his way through his teammates waiting to celebrate at home plate, Dunn said “It was easy. There are only 24 of them."

Dunn’s self-deprecating humor and jocularity with teammates helped add some color to a particularly gloomy period in Reds history.

His locker was a playpen, complete with a luxurious leather massage chair which Dunn charged teammates a quarter to use, a figurine of Hank Williams Jr. on the top shelf and African tribal masks mounted on the wall.

“I was a kid then,” said Dunn, who once prank-called Marty Brennaman during a rain delay. “I grew up in Cincinnati essentially. Cincy will always be home.”

Dunn, 38, was well aware of his flaws. He struck out nearly 2,400 times in 6,883 at-bats during his career, ranking third all-time. He fanned four times in a game 19 times, fourth-most all-time.

While describing one at-bat, Dunn said, “I swung and missed. Go figure.”

The Reds traded Dunn to the Arizona Diamondbacks in August 2008  for Wilkin Castillo and pitcher Micah Owings. Dunn had stints in Washington, for the Chicago White Sox and with Oakland before his career ended in 2014.

“Of all the great players I played with, nobody hit for more power,” Casey said. “When I think about what I miss most about playing basebal,l Adam Dunn always comes to mind. He showed up every day ready to play.”

“You (could) write his name in every day,” said Reds manager Jim Riggleman, who managed Dunn for two seasons with the Nationals. “You pretty much could plug in 38 to 40 homers. He took his walks, was a high on-base guy. He was a lot of fun to be around. His teammates loved him.”

The stories came fast and furious during Induction Weekend.

Dunn often joked that would retire from baseball early to spend more time outdoors. “I’d rather be bass fishing,” he liked to say.

During Spring Training in Sarasota, Florida, Dunn, an adept hunter and fisherman, would teach Larkin -- who was neither -- how to fish.

The two Hall of Famers practiced casting at Larkin’s apartment, trying to land the lure on a coffee table, breaking only a few glass objects in the process. Then they would take Larkin’s boat to private fishing holes to ply their trade.

One day, Dunn decided to hook a baby alligator after they saw a 15-foot gator lurking in the same waterway earlier in the day.

“So, he’s got this baby gator hissing on the side of the boat, while momma gator -- 15 feet -- is out there trying decide who she’s going to eat first, him or me,” Larkin said, amid laughter in the interview room at Great American Ball Park on Saturday.

A common theme for this year’s Reds Hall of Fame class is that the achievements of all three inductees have been underappreciated.

Dunn’s strikeouts and the lack of team success during his time here cause many fans to devalue his career as a Red. Bristol preceded Sparky Anderson and the great run of the Big Red Machine, making his impact a footnote in Reds history. Norman was a member of a 1970s Reds pitching staff that performed in the shadow of the “Great Eight” lineup.

But many former teammates told a different story this weekend.

As former St. Louis Cardinals coach George Kissell once told Riggleman: “If they gave Dave Bristol one more year, you would have never heard of Sparky Anderson."

Bristol, 85, went 298-265 from 1966 to 1969 as Reds manager before being replaced by Anderson, who orchestrated the most successful decade in franchise history.

“I was fortunate to manage some of the best players to ever play the game of baseball,” Bristol said. “They talk about history with the Reds organization. Hopefully I made a little of it.”

Bristol clearly left a mark on his players.

“He hit me ground balls every day,” Tony Perez said. “He helped me so much. I’m in the Hall of Fame because of Dave Bristol.”

Norman was a struggling left-hander with a 1-7 record when he was acquired in a trade with San Diego in 1973.

“He fooled everybody,” said Perez. “When he threw the screwball, every hitter looked funny.”

The weekend’s festivities wrapped up in a jam-packed third-floor ballroom in the Duke Energy Convention Center on Sunday evening with more than 1,000 people, including the entire current Reds team and staff.

“In my opinion, the Reds Hall of Fame is second to only one and that would be Cooperstown,” Dunn said. “Some of the greatest players to not only play for the Reds, to ever play the game,are inducted into the Reds Hall of Fame. I can’t put into words how big of an honor that is.”

The Reds Hall of Fame is expected to be even better in 2019. At Sunday night’s gala, Reds Chief Operating Officer Phil Castellini kicked off a capital campaign to help raise $5 million to modernize the Hall of Fame for the 150th anniversary celebration of baseball’s first professional team. The anniversary logo will be unveiled in August.