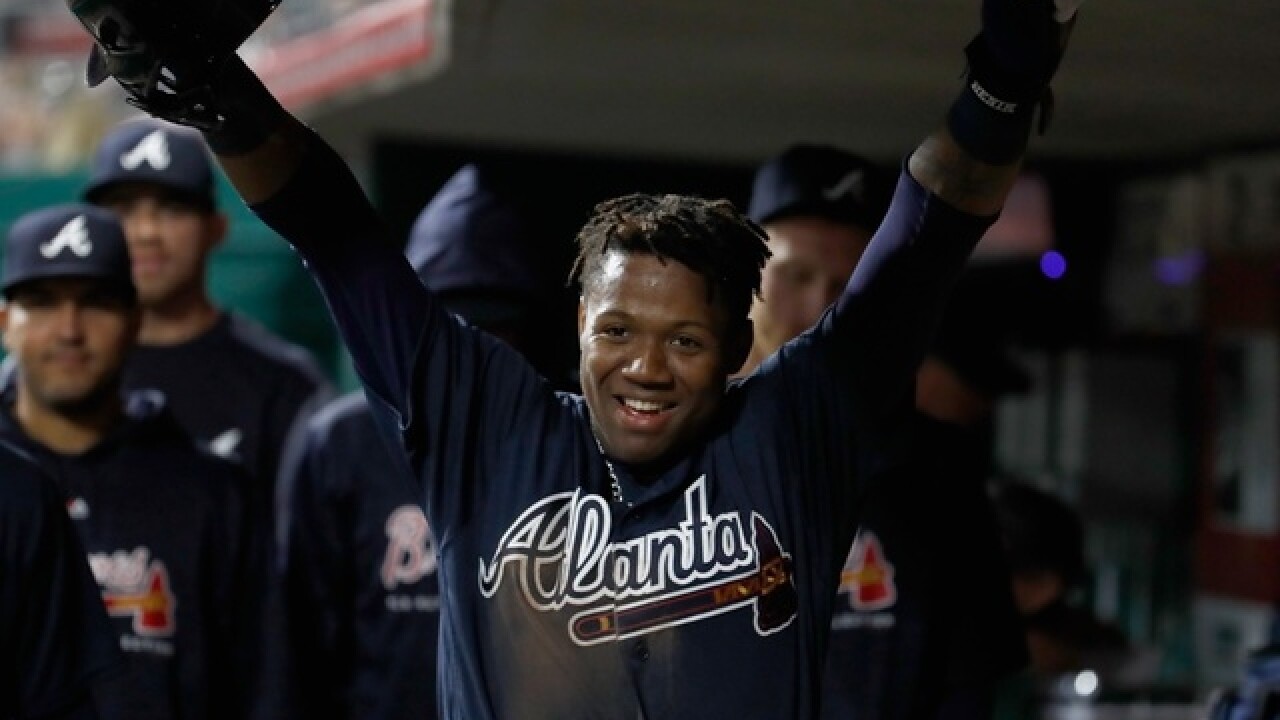 Copyright 2018 Scripps Media, Inc. All rights reserved. This material may not be published, broadcast, rewritten, or redistributed.
Andy Lyons
<p>CINCINNATI, OH - APRIL 25: Ronald Acuna #13 of the Atlanta Braves celebrates after scoring the tying run in the 8th inning against the Cincinnati Reds at Great American Ball Park on April 25, 2018 in Cincinnati, Ohio. (Photo by Andy Lyons/Getty Images)</p>

CINCINNATI (AP) -- Prized prospect Ronald Acuna Jr. singled and scored the tying run in the eighth inning of his big league debut, and the Atlanta Braves went on to beat the Cincinnati Reds 5-4 Wednesday night.

The 20-year-old Acuna became the youngest player in the majors when he was called up from Triple-A before the game. He went 1 for 5 and played left field.

Ozzie Albies, the second-youngest player in the bigs at 21, homered for Atlanta. He was hit by a pitch to begin the ninth and later scored on the go-ahead run on Johan Camargo's second double of the game.

Camargo drove in two runs and Ender Inciarte had three hits for the Braves, who led 3-0 after four innings. Acuna scored on Kurt Suzuki's two-out single in the eighth to make it 4-all.

Dan Winkler (1-0) pitched a perfect eighth and A.J. Minter worked the ninth for his first career save.

Kevin Shackelford (0-1) took the loss in his first appearance of the season since coming off the disabled list. The Reds dropped to 5-19, matching the 1931 team for the worst 24-game start in club history.

Joey Votto's two-run drive, his second homer in two nights, got the Reds on the board in the fifth.

Reds starter Brandon Finnegan, who opened the season on the disabled list with a strained left biceps, allowed two earned in five innings.

Braves starter Matt Wisler was roughed up for nine hit and four runs in five innings.

Reds: 3B Eugenio Suarez is 1 for 5 with a double and two walks in the first two games of his rehab assignment with Triple-A Louisville. He went on the disabled list on April 9 with a fractured right thumb.