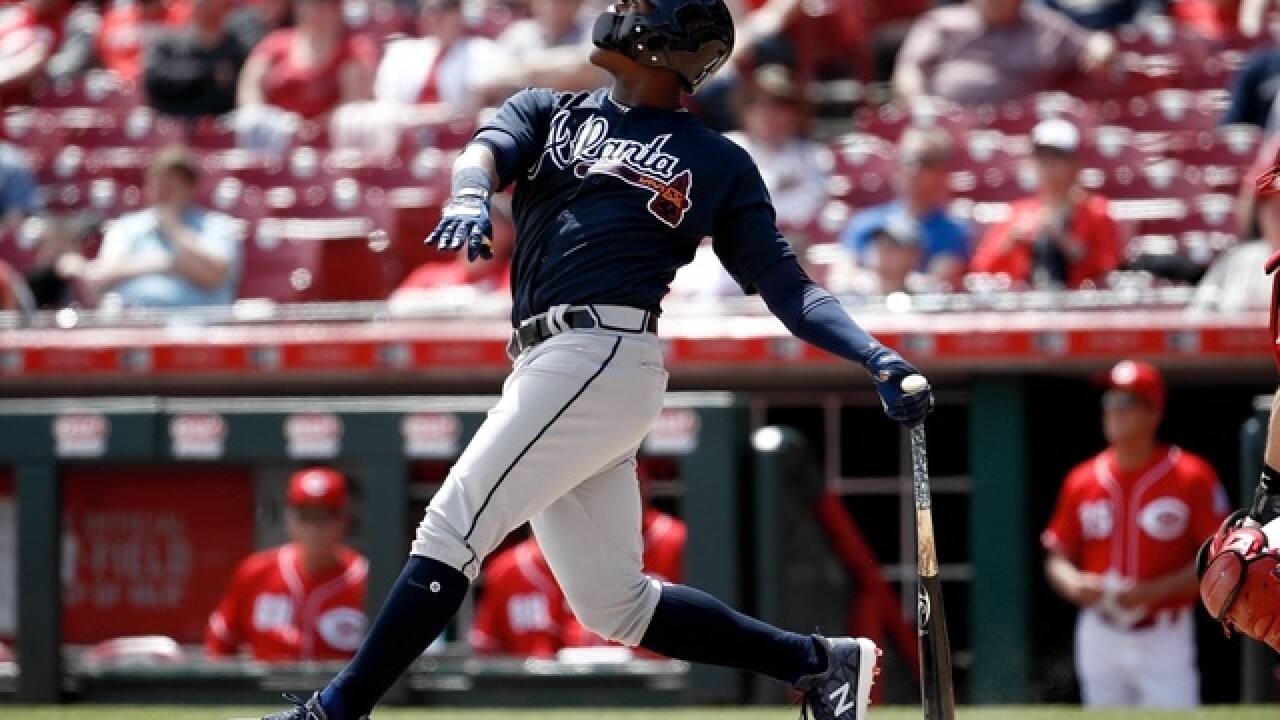 Image copyright 2018 Getty Images. All rights reserved. This material may not be published, broadcast, rewritten, or redistributed.
Andy Lyons
<p>CINCINNATI, OH - APRIL 26: Ronald Acuna Jr. #13 of the Atlanta Braves hits a RBI double in the 8th inning against the Cincinnati Reds at Great American Ball Park on April 26, 2018 in Cincinnati, Ohio. (Photo by Andy Lyons/Getty Images)</p>

Ronald Acuna Jr. and Ozzie Albies, the two youngest players in the major leagues, both homered and combined for five RBIs to lead Atlanta over the Cincinnati Reds 7-4 Thursday and give the Braves a split of the four-game series.

Acuna became the youngest player in the major leagues Wednesday at 20 years, 128 days, and went 1 for 5 in his debut. He led off the second inning Thursday with a home run five rows deep into the left-field upper deck against Homer Bailey, singled in the sixth and hit a tiebreaking double off Wandy Peralta (1-1) in the eighth following Freddie Freeman's third double of the game.

"It's truly a unique moment," Acuna said through interpreter Franco Garcia. "Your first home run in the big leagues is a once-in-a-lifetime moment."

Acuna became the youngest Braves player to homer since Andruw Jones against the Reds on Aug. 23, 1997, when he was 20 years, 122 days. He was greeted in the dugout by the traditional silent treatment and walked almost the entire length of the dugout, exchanging phantom high fives, before his teammates pounced to celebrate.

Albies, a 21-year-old who made his debut last August, hit a two-run homer in the fifth for a 4-0 lead and added an RBI double in the ninth.

"It's fun to watch," Braves manager Snitker said. "It's cool to be around these young guys and the energy they bring."

Snitker was impressed as much by Acuna's speed as his power.

Sam Freeman (1-1) retired all four batters he faced, and Arodys Vizcaino pitched a one-hit ninth for his second save. Cincinnati dropped to 5-20 for the first time in franchise history.

"The Braves are playing good baseball," Reds interim manager Jim Riggleman said. "We didn't have an answer for the middle of their lineup."

Every Atlanta starter except catcher Kurt Suzuki had at least one hit, including pitcher Sean Newcomb, who also was enjoying watching and being part of the youth movement.

"My goal was to go deep in the game," Bailey said.

Reds: 3B Eugenio Suarez was activated from the 10-day DL after recovering from a broken right thumb sustained April 8 when he was hit by a pitch from Pittsburgh's Jameson Taillon. ... The Reds selected the contract of INF-OF Rosell Herrera from Triple-A Louisville and optioned OF Phillip Ervin and INF Cliff Pennington to the International League farm team.

Braves: RHP Julio Teheran (1-1) is to start Friday at Philadelphia.

Reds: Cincinnati opens a three-game trip on Friday at Minnesota. RHP Luis Castillo (1-3) is slated to open Friday when the Reds play at Minnesota's Target Field for the first time.