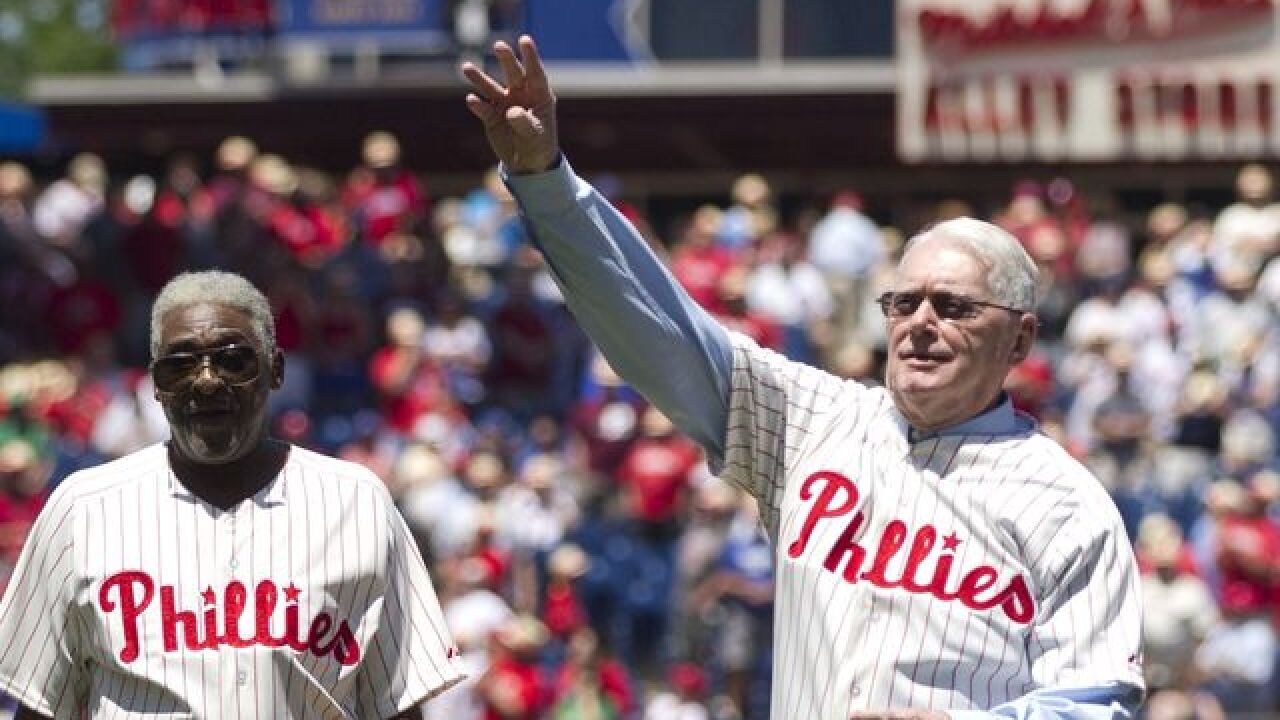 Copyright Getty Images
&lt;p&gt;PHILADELPHIA, Pa. - Jim Bunning throws out the first pitch before the Phillies game on June 15, 2014. The club was celebrating the 50th anniversary of his perfect game on June 21, 1964. (Photo by Mitchell Leff/Getty Images)&lt;/p&gt; 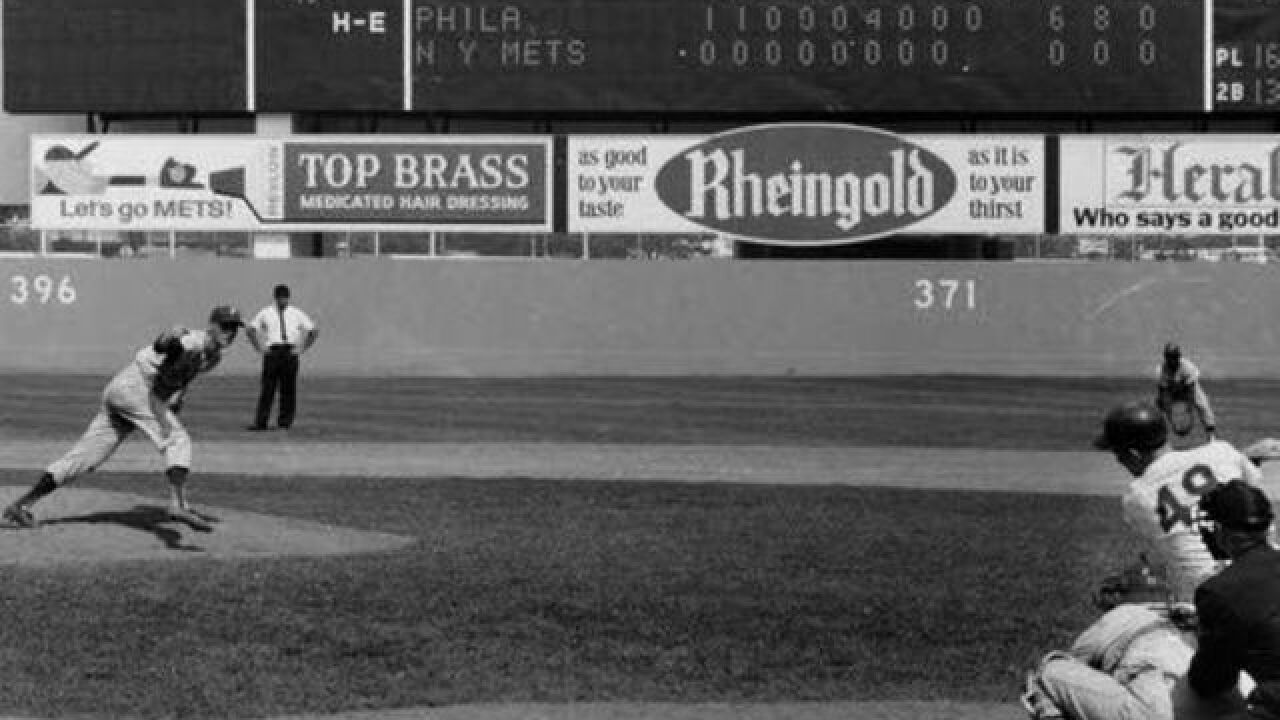 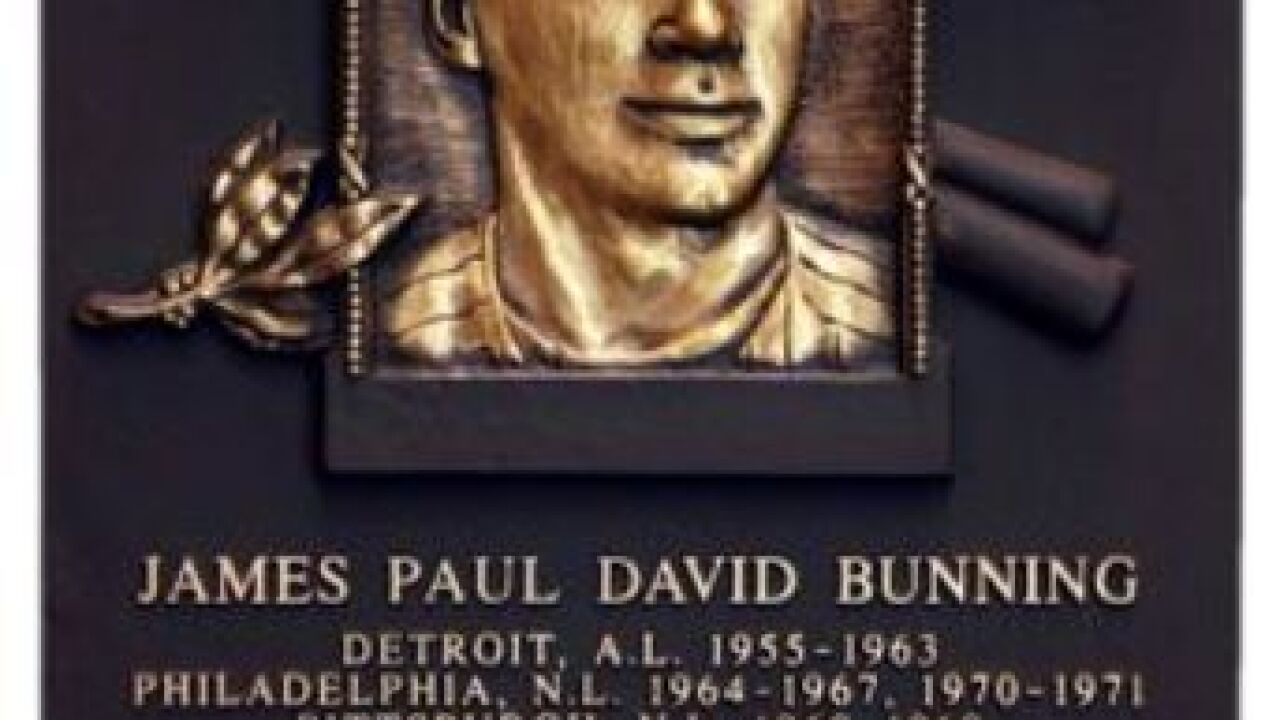 Defying baseball superstition by openly talking to teammates about it in the late innings.

The cameo appearance on the "Ed Sullivan Show" with another sports celebrity that night.

The less-thrilling celebration at a highway motel restaurant afterward.

Even the agonizing end to that 1964 season.

Agonizing for his Phillies, who lost 10 straight games in late September and blew a 6½-game lead in the last two weeks.

Agonizing for the Reds, who went into the final day tied for first place with the Cardinals, only to lose to Bunning at Crosley Field.

"It's pretty vivid," the 82-year-old Bunning, one of Northern Kentucky's favorite sons, recently told reporters in Philadelphia, where the Phillies celebrated the 50th anniversary of his rare feat before last Sunday's game.

VIDEO: Watch the final three outs in the player below

When 32-year-old Bunning took the mound against the Mets on June 21, 1964, the sidewinding right-hander was about to stamp his passport to the Hall of Fame and make baseball history.

It was Father's Day, and Bunning's wife, Mary, and eldest child, Barbara, 11, drove 100 miles from their apartment in Cherry Hill, N.J., to watch Bunning pitch and to visit the World's Fair across the street from Shea Stadium. The Bunnings' other six children at the time – ages 2 to 9 – stayed home with a babysitter.

"It meant so much to me because my wife and my daughter came up for the game, and they never would have come up if it wasn't Father's Day," Bunning remembered. "Of course, they came up for the World's Fair, too."

Bunning was in his first year with the Phillies, traded by the Tigers after nine seasons following a 12-13 off year in 1963. The St. Xavier High and Xavier University product had pitched his first no-hitter against the Red Sox in Fenway Park in 1958, getting the legendary Ted Williams for the final out.

"The only time I ever got Ted Williams out four times. Four pop-ups," Bunning said.

There were no Ted Williamses in the Mets lineup. These were the lowly expansion Mets in just their third season. They were 20-46 on their way to another last-place finish (53-109) in the 10-team National League.

Three weeks earlier, he had taken a perfect game into the seventh inning against the other NL expansion team, the Colt 45s (Astros), only to have it spoiled by a bloop single.

A week before that, he had thrown a one-hitter against the Colts.

Now the stars were lined up again.

For one thing, Bunning said he liked pitching in the heat.

"I sweated a lot and I'd go through three jerseys in every game, but I welcomed it because I knew I was in better shape than the hitters," he said.

He looked at the Mets lineup card, nodded in approval when he saw that "Big George" Altman wasn't playing, and told his catcher, Gus Triandos, after warming up that he felt great and had his best stuff.

His slider, fastball and slow curve were all sharp.

Once the game started, though, Bunning had to luck past the very first batter.

"I got away with some bad pitches early," Bunning said. "I hung a couple sliders to Jim Hickman, but he only fouled them back.

"I told Gus if they weren't hitting those pitches, this could be one heck of a day."

In every perfect game, every no-hitter, there has to be at least one great defensive play, and Bunning got it in the fifth inning from second baseman Tony Taylor.

Taylor knocked down a smash by Mets catcher Jesse Gonder. The ball rolled away from Taylor, but he was able to throw from his knees and get the slow runner at first.

"It was the only straight change-up I threw in the whole game, and Tony made a spectacular play," Bunning said.

Bunning was sailing after that. He threw only 90 pitches and went to a three-ball count only twice.

His teammates gave him a 2-0 lead in the second inning, and Bunning contributed a two-run double to the Phillies' four-run sixth.

It was 6-0, and the Mets fans turned to cheering for Bunning.

Bunning survived another close call in the eighth. Bob Taylor swung and missed on a 3-2 pitch, but Triandos dropped the third strike. The catcher had to scramble to get the ball and throw to first.

Pitchers and teammates don't normally talk when a perfect game or no-hitter is in progress in the late innings, but Bunning said he tried the silent treatment three weeks earlier in Houston and decided to take a different tack.

Bunning even asked his catcher to tell him a joke when he visited the mound in the ninth inning.

"I know it relaxed me and I hope it relaxed the whole team," Bunning said.

Back in their apartment, the youngest Bunning kids weren't paying much attention to their father's game.

Only Jim, 9, tuned in the last few innings.

The 16-year-old babysitter, Mary Fran Hoffman, had been watching the entire game, though, and she rounded up the kids in front of the TV for the ninth inning.

Bunning got shortstop Charley Smith to pop out behind third. Then manager Casey Stengel sent up Altman, the one Mets hitter who concerned Bunning.

"Big George" was a left-handed swinger with pop. Altman fouled two pitches, then swung and missed for Bunning's ninth strikeout.

Up came another left-handed pinch-hitter, backup catcher John Stephenson, who was hitting .074.

Jim Bunning strikes out John Stephenson for the final out.

"When I faced him earlier that season, Gene Mauch (Phillies manager) told me, 'This guy can't spell curveball,' " Bunning said.

Bunning struck him out on three curveballs, slammed his fist into his glove, and the celebration was on.

His wife Mary and daughter Barbara came onto the field.

They have been married now for 62 years, nine children, 35 grandchildren and 14 great-grandchildren.

CBS sent a page to the ballpark to ask Bunning if he would go on "Ed Sullivan" that night.

First, he wanted to have dinner at Toots Shor's, a famous New York celebrity hangout. But it was closed for Father's Day.

So they went to the CBS theater, and Bunning met golfer Ken Venturi, who had won the U.S. Open that same day in a most dramatic finish. He had to play 36 holes in the grueling heat and needed to take fluids intravenously.

"He said I knocked him off the front page of the New York papers. He said, 'I almost died winning that thing,' " Bunning recalled.

Bunning still hadn't eaten, but after a few minutes on stage with Sullivan and Venturi, he and his family started the drive back to the Philadelphia area and stopped at the first restaurant they came to - a Howard Johnson's on the New Jersey Turnpike.

As underwhelming as that might sound, it was no match for how the Phillies ended the season.

Bunning went on to finish with a 19-8 record and 2.63 ERA, but the Phillies' season turned sour when they went into a tailspin in the final two weeks.

The Reds started the Phillies on their 10-game losing streak by sweeping three games in Philadelphia starting on Sept. 21.  With one game left, the top of the standings looked like this:

All it would take to have a three-way tie would be a Phillies' win over the Reds' and a Cardinals' loss to the Mets..

Bunning did his part. He shut out the Reds 10-0 at Crosley Field, giving up just six hits and striking out five.

But the Cardinals beat the Mets 11-5 and won the pennant by one game over both the Phillies and Reds.

Bunning never did get a chance to pitch in a World Series.

"Mentally, I've never gotten over it," Bunning said. "It was as close as I ever got."

To this day, only seven pitchers have a perfect game and a no-hitter; only five have no-hitters in both leagues, and only 23 have perfect games.

Baseball writers, though, did not consider his 224-184 career record worthy of the Hall of Fame, and in their closest vote, Bunning missed by four votes of getting the three-fourths he needed. He was elected by the Veterans Committee in 1996.

VIDEO: Watch Bunning's Hall of Fame speech in the player below