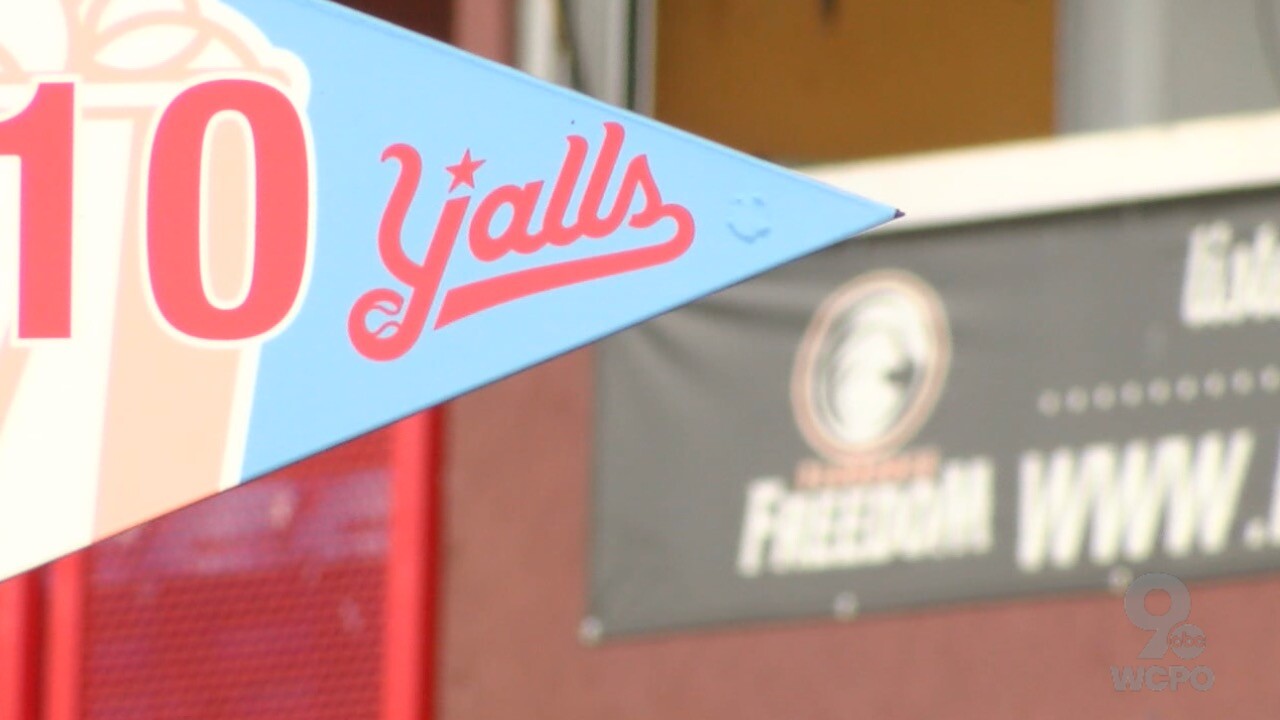 FLORENCE, Ky. — How does a baseball organization stay afloat, when no baseball is being played?

The COVID-19 pandemic forced the Florence Y’alls to figure that out.

Fans have been going to the team’s stadium for months, but not for baseball.

“This is my summer,” said Y’alls fan Ted Graham, who lives in Northern Kentucky.

Graham and his family members were eating dinner at the stadium, which had been turned into a bar & grill.

“We spent a lot of time thinking about, ‘How can we still be viable?” said David DelBello, the Y’alls President.

Typically, the team would be in the middle of the season right now.

The team, though – recently rebranded from the “Freedom” to the “Y’alls” – hasn’t played a single game.

The organization’s first creative idea was to open an animal farm.

During a time when most zoos were closed, the idea drew hundreds of guests.

Then came the bar & grill at the stadium, which featured live music each weekend.

“Fortunately, with our wide concourses, we were able to fit as many people as possible, as long as they were socially distanced,” said DelBello.

While those creative ideas gave fans something to do, and kept employees working; there was still one big thing missing.

The team recently got confirmation from Kentucky leaders that they can have baseball in 2020; and there can be spectators in the seats.

“We were elated,” said DelBello.

They’re allowed to host up to 50% of fan capacity – but even that will be challenging.

“That’s a small nightmare. We’re still trying to work through the process. But quite honestly, I don’t even think we’re going to get to 50% capacity,” explained DelBello. “We’re going to make sure that everyone seated is socially distanced properly.”

The next challenge the organization faced was who they’d play against.

The independent league they play in, the Frontier League, cancelled its season, forcing the organization to get creative again.

“We’ve gotten together with the Lexington Legends, just down the road. We are going to play a ‘Battle of the Bourbon Trail’ 2020 series,” explained DelBello.

The Minor League Baseball season was also cancelled this year, which opened the door for this new rivalry.

There will be four teams, total, playing a rotating schedule.

Lexington will split-up into two different teams, and so will Florence.

“They’re going to be under the same organization, which is ours. However, they are going to compete against each other just like you would any other team. They just happen to be situated in the same city.”

For an organization that recently re-branded itself, it’s an opportunity to mix the past and present.

“I really liked the name ‘Freedom’ but if they changed it to ‘Y’alls’ we will support them no matter what,” said Graham.

The two Florence teams this season will be the Y’alls and, fittingly, the Freedom.