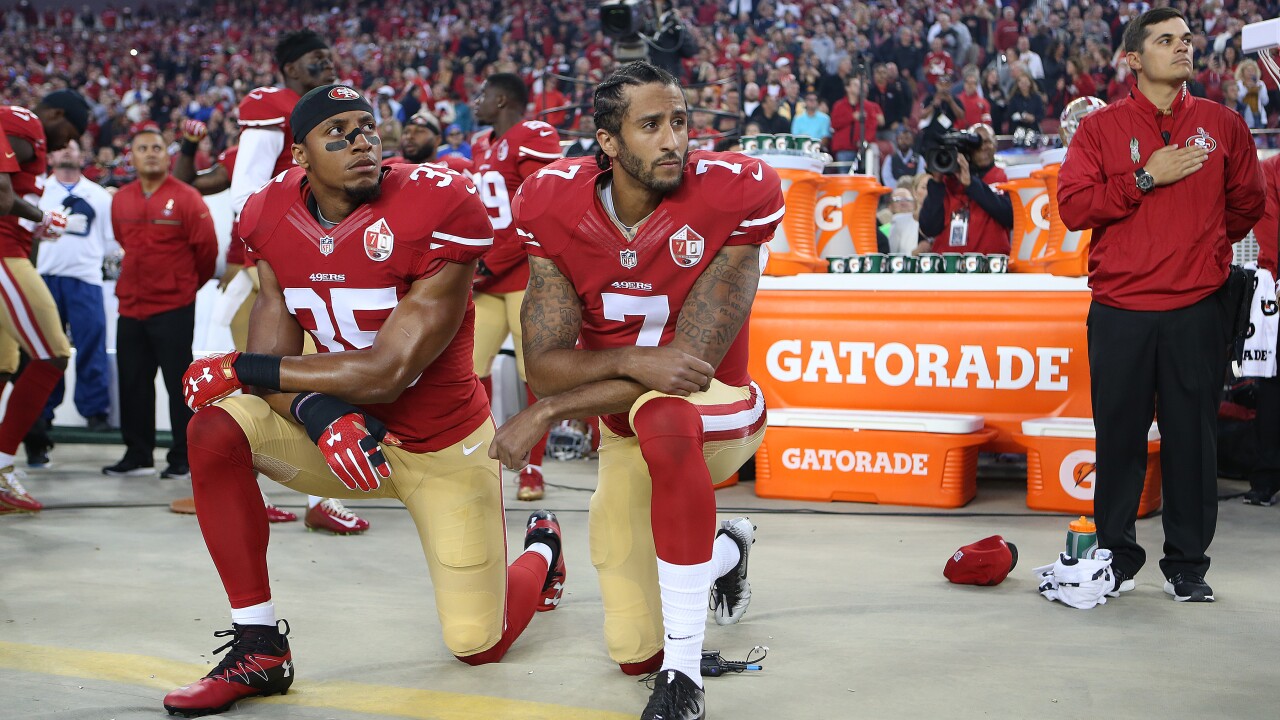 Daniel Gluskoter/AP
San Francisco 49ers Eric Reid (35) and Colin Kaepernick (7) take a knee during the National Anthem prior to their season opener against the Los Angeles Rams during an NFL football game Monday, Sept. 12, 2016, in Santa Clara, CA. The Niners won 28-0. (Daniel Gluskoter/AP Images for Panini)

President Donald Trump continued on Friday to criticize a 2016 movement led by Colin Kaepernick and other NFL players who knelt during the national anthem in response to police brutality.

As Trump revisited attacks on Kaepernick, NFL Commissioner Roger Goodell expressed regret for being critical of the movement.

Kaepernick, once a quarterback who led the 49ers to the Super Bowl, was excluded from the league following the 2016 season. Kaepernick ended up settling with the league over claims of collusion.

Even without Kaepernick in the league in 2017, a number of players continued to participate in on-field protests during the anthem.

After becoming preisdent in 2017, Trump demanded players stand for the national anthem. Vice President Mike Pence even walked out of a Colts game earlier during 2017 as part of a boycott against players taking a knee.

In 2018, the league briefly implemented a policy requiring players to stand during the national anthem.

Earlier this week, Saints quarterback Drew Brees apologized after facing criticism from fellow players for saying that it was inappropriate to kneel during the national anthem. On Friday, Trump said Brees should not have apologized.

“I am a big fan of Drew Brees,” Trump tweeted. “I think he’s truly one of the greatest quarterbacks, but he should not have taken back his original stance on honoring our magnificent American Flag. OLD GLORY is to be revered, cherished, and flown high.

“We should be standing up straight and tall, ideally with a salute, or a hand on heart. There are other things you can protest, but not our Great American Flag - NO KNEELING!”

“Through my ongoing conversations with friends, teammates, and leaders in the black community, I realize this is not an issue about the American flag,” Brees said late Friday. “It has never been. We can no longer use the flag to turn people away or distract them from the real issues that face our black communities.

“We as a white community need to listen and learn from the pain and suffering of our black communities,” Brees added. "We must acknowledge the problems, identify the solutions, and then put this into action. The black community cannot do it alone. This will require all of us.”

Meanwhile, Goodell, who faced blame for not standing behind players who participated in protests, conceded he was wrong about players kneeling during the national anthem in response to police brutality.

While Brees apologized for his stance on players protesting police brutality, Goodell did not apologize during his statement.

We, the NFL, condemn racism and the systematic oppression of Black People. We, the NFL, admit we were wrong for not listening to NFL players earlier and encourage all to speak out and peacefully protest. We, the NFL, believe Black Lives Matter. #InspireChange pic.twitter.com/ENWQP8A0sv