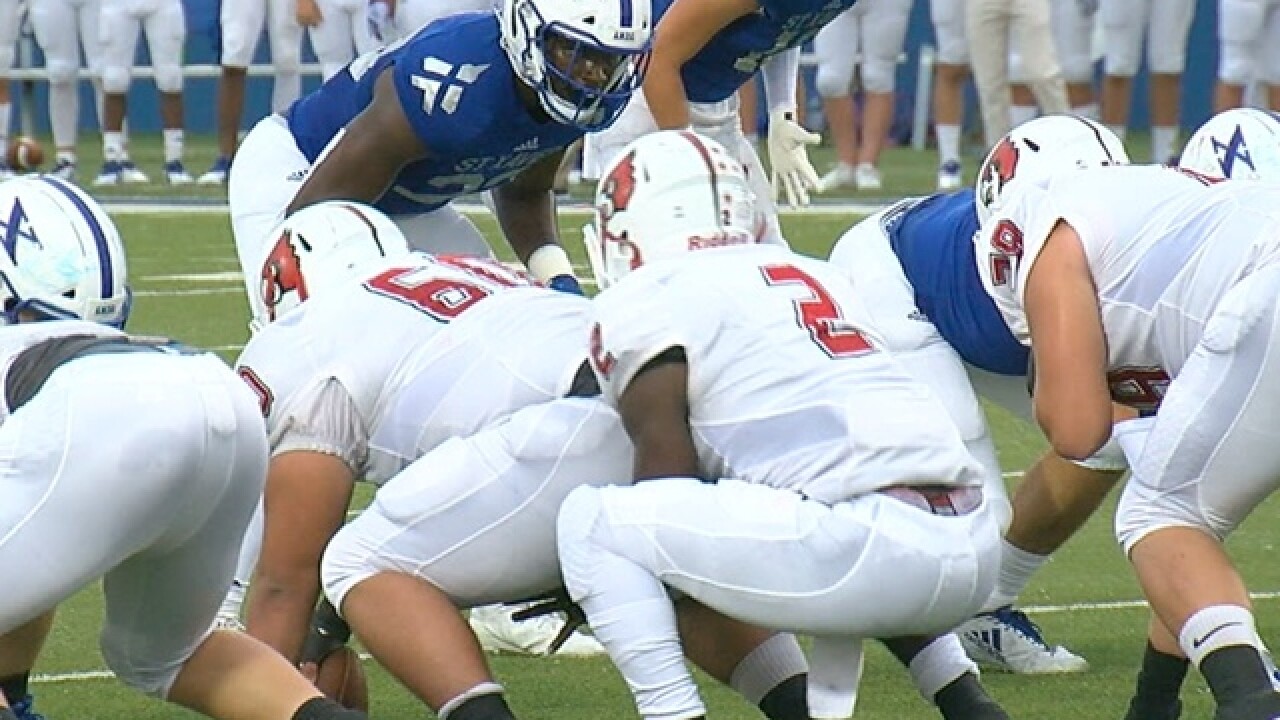 SPRINGFIELD TOWNSHIP, Ohio -- Colerain junior defensive back Deshawn Pace and his teammates had to be at school at 6:30 a.m., Saturday to prepare for another trip along North Bend Road.

It was certainly a unique situation given the postponement due to inclement weather at halftime of Friday's football game.

But, it wasn’t a problem for the Cardinals. Their summer workouts prepared them for a weekend liked this.

As Colerain coach Tom Bolden likes to say, the Cardinals have to always be ready to bring the juice.

“We came out strong,” Pace said. “We had a good week of practice for real.”

Colerain rallied to defeat host St. Xavier 14-12 Saturday at Ballaban Field in the completion of a Week 2 football game that was named one of the nation’s top 10 to watch this week by MaxPreps.

“I told Steve and the rest of their staff, ‘I will see you in the playoffs at some point somewhere I know that,’” Bolden said. “They’re good; we’re good. We will hopefully see you again. It’s good for the fans.”

There is never a script for having a game postponed at halftime. But, the Cardinals used Friday night to re-group in the 37th meeting between the rival programs.

The game was postponed at 9:15 p.m. Friday. The bus left and the players ate and went straight to bed after getting back to Colerain.

“I think we handled it pretty good,” Bolden said. “We went back and we got everything handled. We talked to the kids about getting home, getting to bed and getting in earlier and making some adjustments. I think we came out locked in razor sharp.”

St. X (1-1) committed five turnovers overall for the game which gave the Cardinals (2-0) plenty of opportunities.

With a 9:30 a.m., start Saturday, the Bombers fumbled on their first drive on third down.

Colerain scored on the next play when senior JJ Davis took the pitch from senior quarterback Deante Smith-Moore and went 19 yards for a touchdown. Senior Chris Mangold’s extra point gave the Cardinals a 7-6 lead with 11:18 left in the third quarter.

Later, Pace’s interception helped set up the Cardinals’ next score. Senior Ivan Pace Jr., Deshawn’s brother, scored on a 2-yard run to help give the Cardinals a 14-6 lead with 4:30 left in the third.

St. X had an opportunity on its next drive after junior quarterback Wyatt Hudepohl found senior Chris Payne for a 55-yard pass connection on third down to put the Bombers in the red zone.

But, a miscommunication on a snap pushed the Bombers back into a 4th-and-goal situation from the Colerain 26. An incomplete pass gave the Cardinals the ball back with 1:55 left in the third.

St. X had 357 yards of total offense for the game but the Cardinals held the Bombers to 59 yards on the ground. Colerain shut out La Salle in Week 1 and held the Lancers to 8 yards passing.

“How about the defense? If we play defense like that, we will be all right,” Tom Bolden said. “Hats off to the defense – the last two weeks they’ve been absolutely phenomenal.”

Yet, the Bombers had another opportunity on the ensuing Colerain drive. The Cardinals faced a 4th-and-1 on its own 22 and were lined up to punt when St. X was called for 12 players on the field.

“I thought we played hard,” Specht said. “I told them Colerain is a heck of a football team. They always are. It’s a classic battle. The difference in the game was six turnovers to zero. We had a chance. It’s a deal where if we can clean some things up we have a good chance to be a good football team.”

The Cardinals played Saturday without 6-4, 315-pound offensive lineman Rusty Feth (Miami University) who was sidelined with a knee injury from Friday night.

Tom Bolden said he would given an update about his status later Saturday.

“Tommy has a heck of a club,” Specht said. “They are well coached. They didn’t make mistakes. They are going to beat tough to beat.”