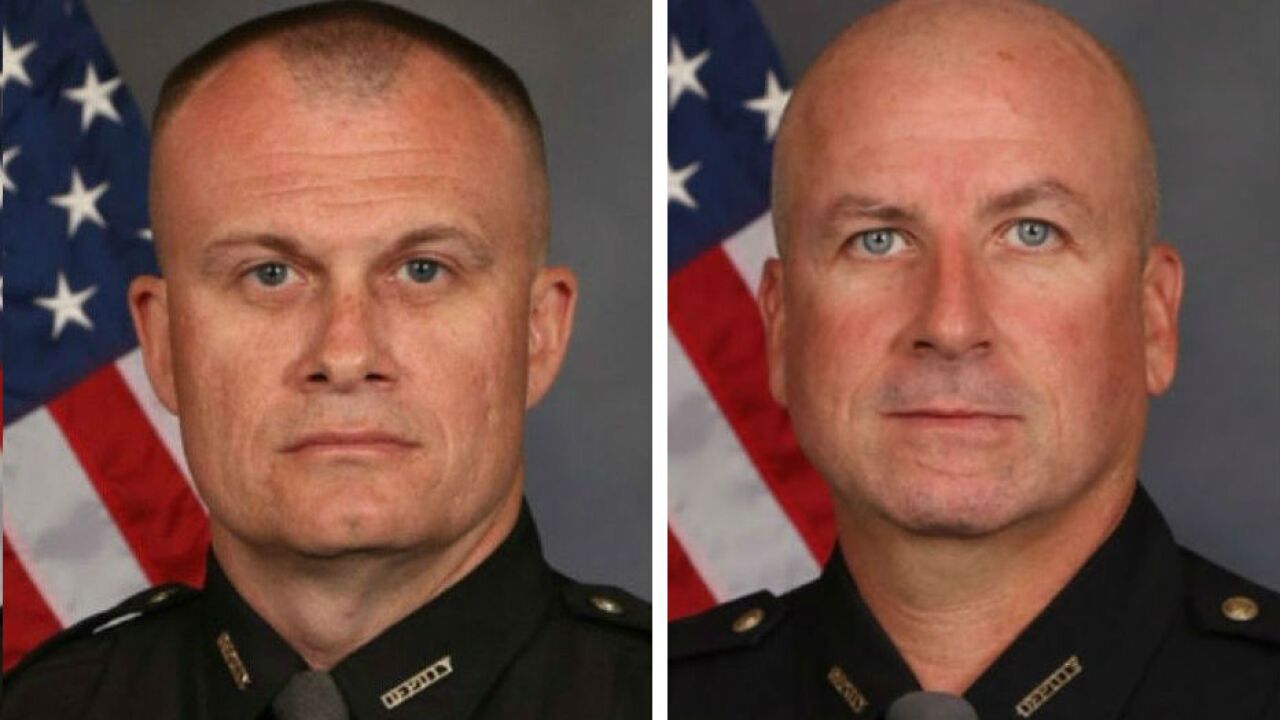 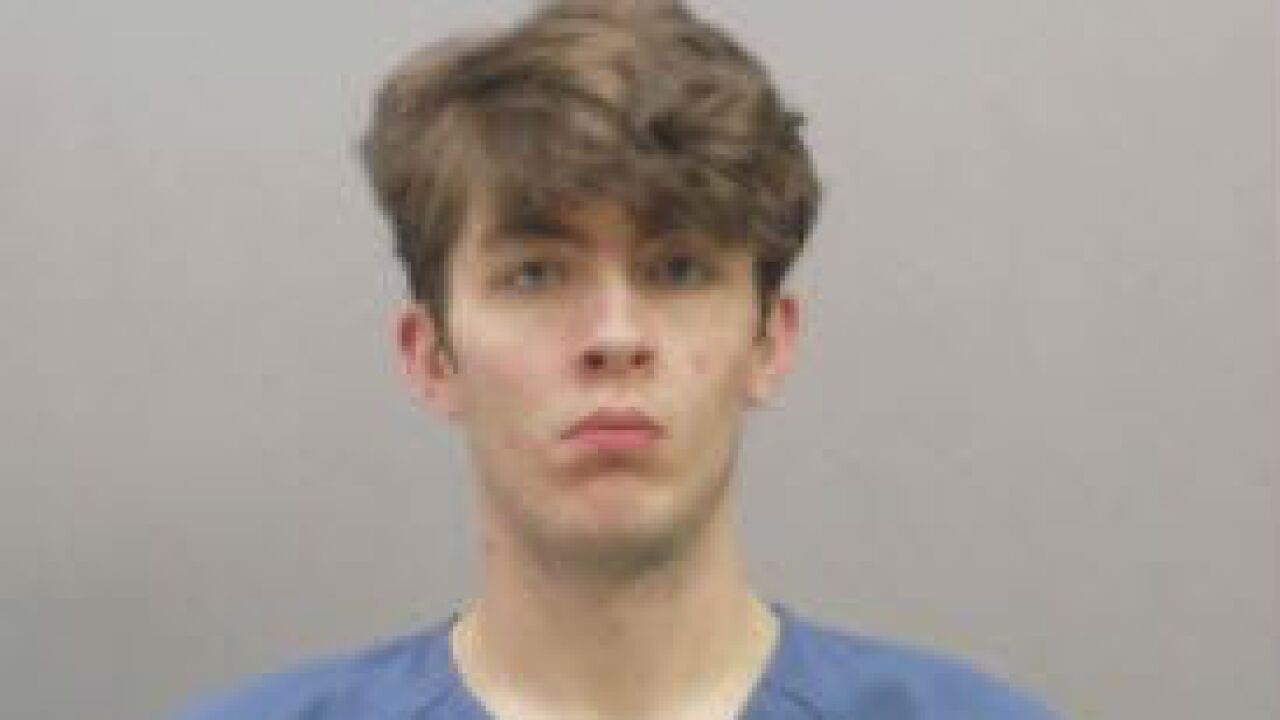 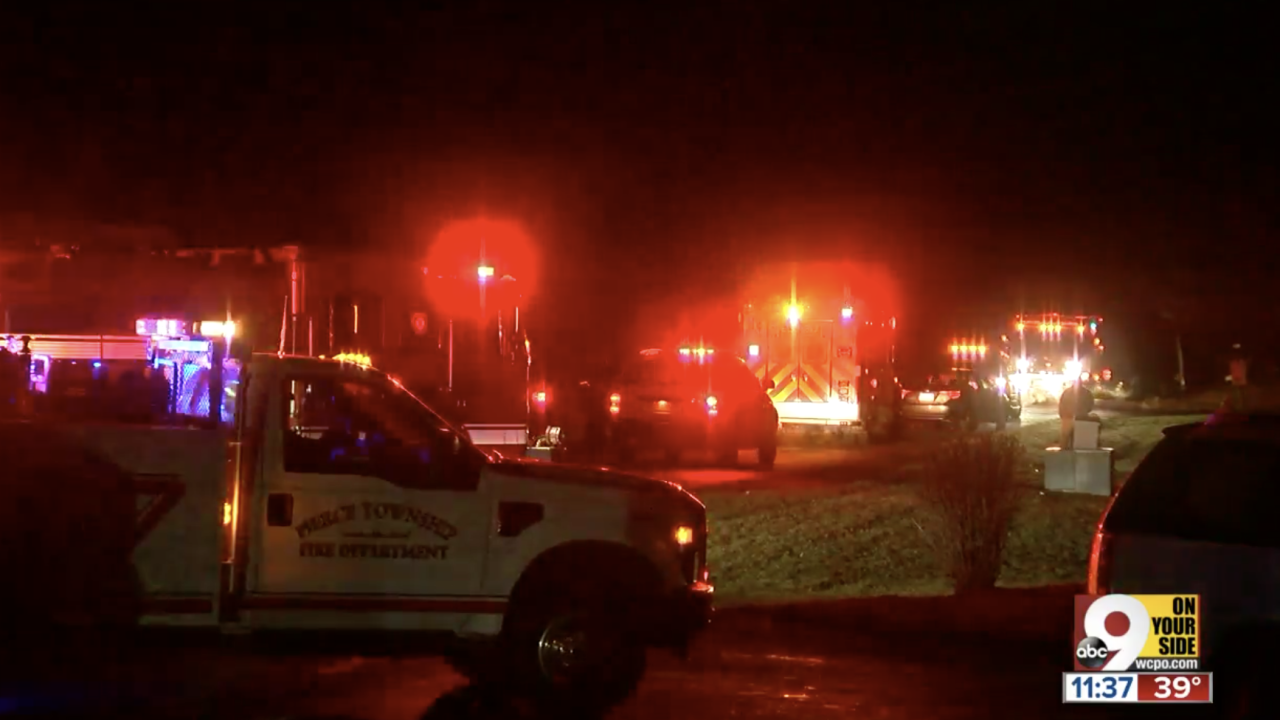 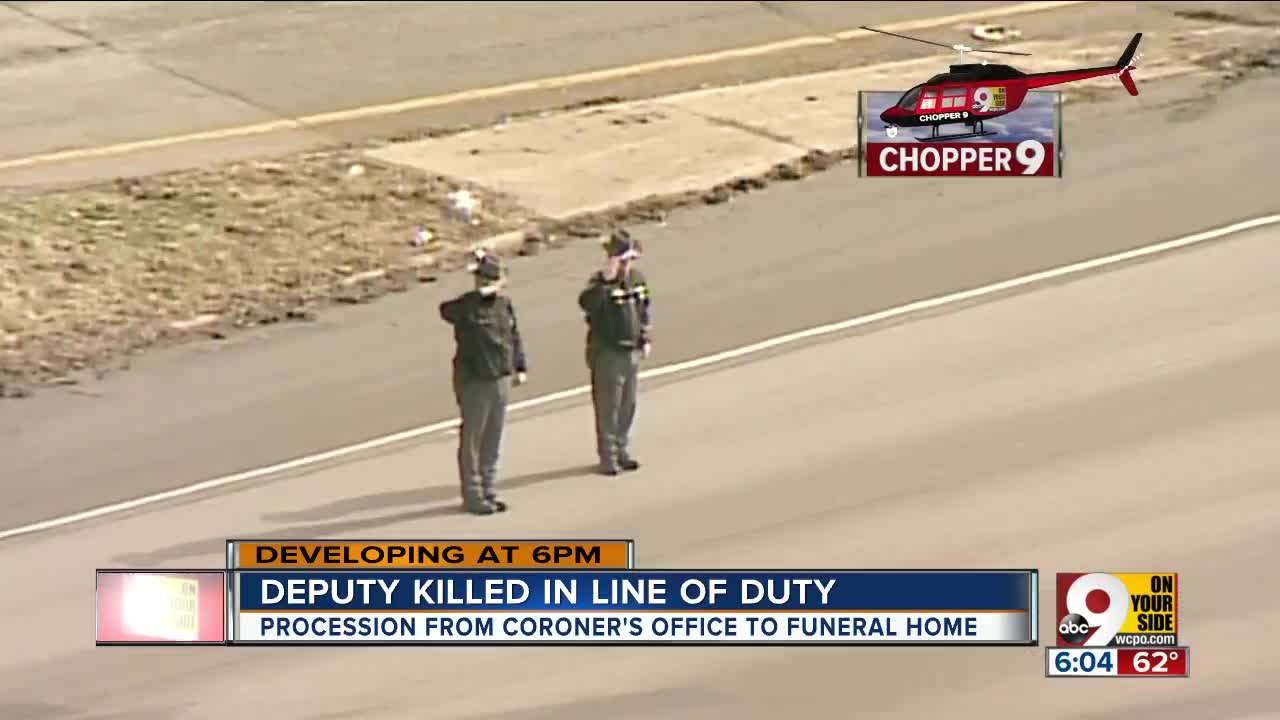 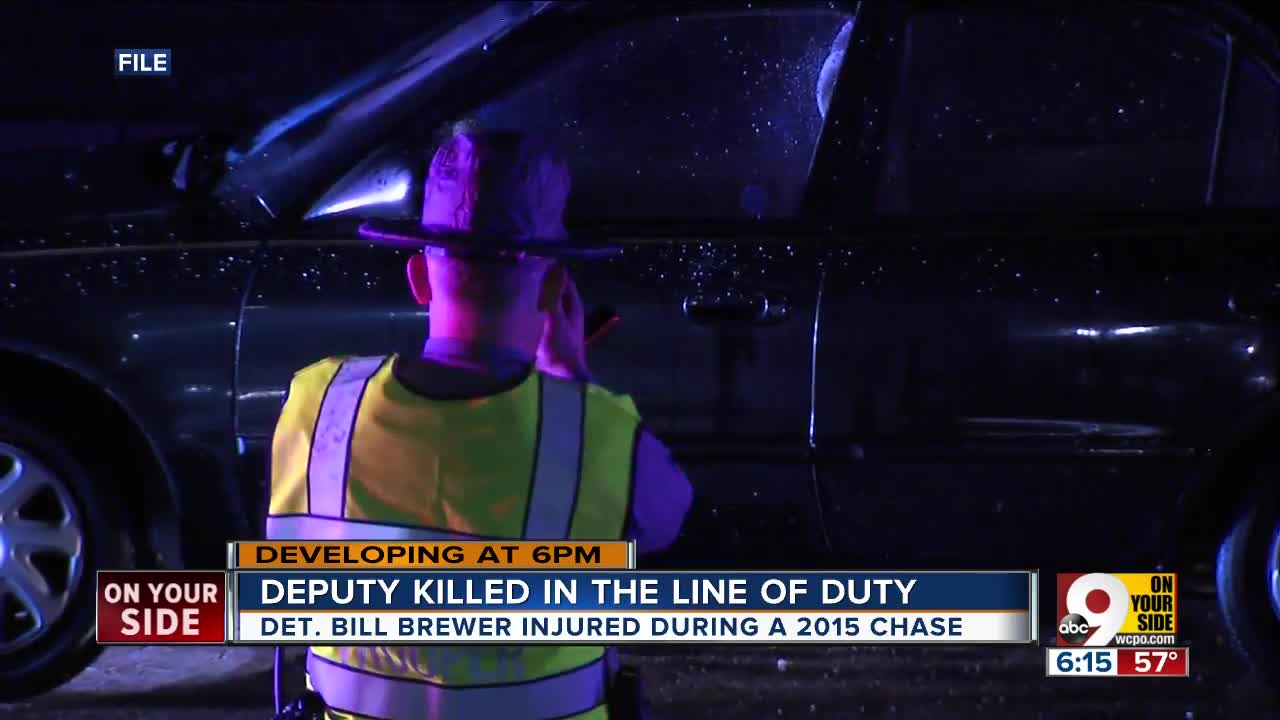 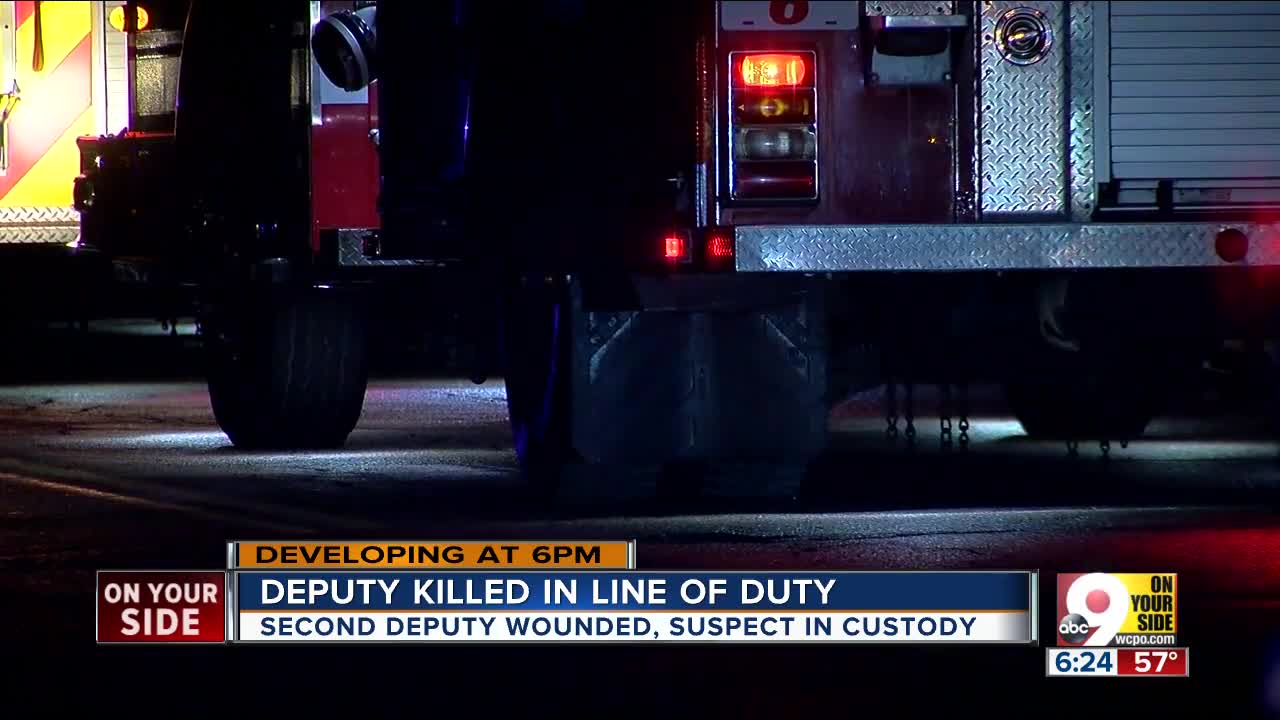 PIERCE TOWNSHIP, Ohio — Det. Bill Brewer, a 20-year veteran of the Clermont County Sheriff’s Office with a wife and 5-year-old son, has been identified as the deputy killed in a 12-hour standoff at an apartment complex that started Saturday night and ended Sunday morning.

A deputy wounded in the standoff has been identified as Lt. Nick DeRose a 22-year veteran of the Sheriff’s Office. DeRose was treated and released from University of Cincinnati Medical Center, according to the Sheriff's Office.

The Sheriff's Office identified the suspect as Wade Edward Winn, 23, who was taken into custody at 6:35 a.m. after firing multiple rounds during the violent standoff at On The Green at Royal Oak Apartments. Winn had barricaded himself in his apartment and was threatening to kill himself, according to Clermont County authorities.

"Deputy Brewer gave his life attempting to help a person who was admittedly suicidal," Sheriff Steve Leahy said in a statement. “This will forever change the atmosphere of the Clermont County Sheriff’s Office.”

MORE: Funeral services set for Clermont County deputy who died in the line of duty

WATCH: WCPO's Jasmine Minor's wrapup on the standoff below:

Court records show Winn was charged with improperly handling firearms in a motor vehicle in 2018 and pleaded not guilty. He also pleaded guilty to marijuana charges from 2015 and 2017.

According to the Sheriff's Office, the suspect called 911 and reported that he believed someone was inside his apartment on St. Andrews Drive. The caller also said he was suicidal and had a gun.

Near the end of the standoff, a fire started in the building and caused extensive damage. In a brief statement, Capt. Jeff Sellers of the Sheriff's Office confirmed that the two-alarm fire was connected to the standoff, but Sellers gave no indication how the fire started.

The apartment complex is next to Stillmeadow Country Club, formerly known as Royal Oak Golf Course.

WCPO’s Jasmine Minor, reporting overnight from a media vantage point a half-mile away from the apartment building, said the standoff was intense. Minor said she heard more shots fired shortly after 6 a.m., and shouts of "Go! Go! Go!" Minor said she saw police cars and fire trucks racing toward the building, then she saw flames shooting through the roof.

Minor reported hearing rounds of gunfire at several times overnight. She said she heard deputies on megaphones saying, "Come out with your hands up! We don't want to hurt you!"

Earlier, police confirmed that one male suspect was still inside the building,

Here's a timeline from deputies:

Before the standoff ended, a deputy on the scene told WCPO they had not shot back at the barricaded man but they did fire a flash-bang grenade shortly before midnight. A flash-bang emits an intensely loud "bang" and a blinding flash designed to disorient or incapacitate a suspect.

Sellers called it a very sad day for the Clermont County Sheriff's Office.

. @FranDeWine and I are heartbroken to learn of the death of Officer Bill Brewer and injury to Officer Nick DeRose in the line of duty. Please keep their families and @ClermontSheriff in your thoughts and prayers.

Some residents had been standing outside unable to return to their apartments once the incident began. Clermont County dispatch said some roads in the area were closed, and people were advised to avoid the area.

After one round of gunfire , officials directed news crews to move back from the area around the apartment building.

RELATED: What we know, what we don't know about Pierce Township standoff.

Aircare dispatch confirmed they received a call from the area for medical support, but were unable to respond due to weather issues.

In 2016, Brewer was struck by a passing car as he attempted to apprehend a shoplifting suspect outside the Walmart store on Ohio Pike. Brewer got into a scuffle with Trent Austin Skeene when Skeene tried to avoid being handcuffed. Brewer's injuries were not life-threatening, according to a WCPO.com report.

Just one full month into the new year, 2019 has been tragic already for local law officers:

On Jan. 4, Colerain police officer Dale Woods was hit by a moving vehicle while Woods was working another traffic accident on Colerain Avenue. Woods, a 15-year veteran, passed away three days later at UC Medical Center. The driver of the vehicle that struck Woods remained at the scene. No charges have yet been filed, but the case remains under investigation.

On Jan. 29, Clearcreek Township officer Jerrid M. Lee, off-duty at the time, was killed in a vehicle crash on Ohio SR 125 near Lindale Mount Holly Road in Clermont County. Lee died at the scene. The driver of the other vehicle has been charged with aggravated vehicular homicide. Authorities believe drugs were a factor in the crash.

9 On Your Side was on the scene all night long and will continue providing live updates on air and and online.